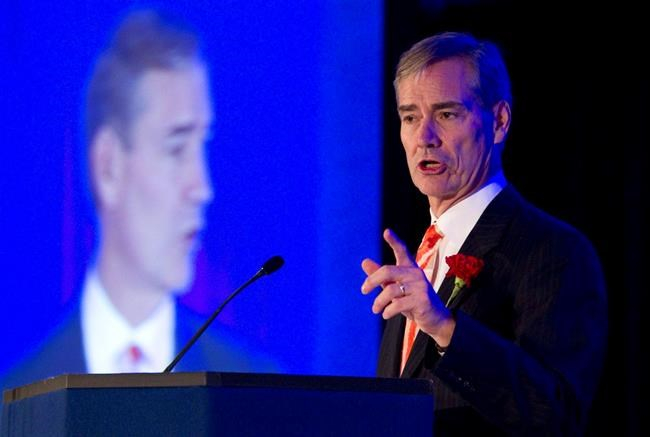 The CEO of Maple Leaf Foods spoke out Sunday against the U.S. government, days after an Iranian missile accidentally shot down a jetliner, killing all 176 people on board — including the family of a company employee.

Michael McCain said in a series of tweets that the time since Wednesday's crash has not quelled his anger over what he describes as a "needless, irresponsible series of events in Iran."

"U.S. government leaders unconstrained by checks/balances, concocted an ill-conceived plan to divert focus from political woes. The world knows Iran is a dangerous state, but the world found a path to contain it; not perfect but by most accounts it was the right direction," he wrote, saying he feels that "a narcissist in Washington" destabilized the region.

The tweets were sent from the packaged meat company's official account, though McCain characterized them as "personal reflections."

The plane was mistakenly shot down minutes after taking off from an airport on the outskirts of Tehran.

Iran mistakenly downed the Ukrainian flight as Tehran braced for retaliation after firing ballistic missiles at two bases in Iraq housing U.S. forces. The ballistic missile attack, which caused no casualties, was a response to the killing of Gen. Qassem Soleimani, Iran's top general, in a U.S. drone strike in Baghdad.

They were retaliating for the U.S. killing of Iranian Gen. Qassem Soleimani, a drastic step that triggered an instant backlash across the Middle East and put the U.S. and Iran on a war footing.

Iran has admitted the plane was mistaken for a hostile target amid those soaring tensions with the United States, after first pinning the crash on a mechanical failure.

U.S. President Donald Trump at one point said four American embassies were under possible threat when he approved Soleimani's killing, but Defence Secretary Mark Esper explicitly said Sunday that he had seen no hard evidence of that.

The walk-back raises questions about the scale of the threat Trump described last week.

Prime Minister Justin Trudeau has said Iran must take full responsibility for shooting down the plane, which was carrying 138 passengers bound for Canada, including 57 Canadian citizens. He said that must include a full and credible investigation. But he's refrained from blaming the crash on the Americans.

"I think it is too soon to be drawing conclusions or assigning blame or responsibility in whatever proportions," he told reporters last week.

McCain, meanwhile, said he's still grappling with the death of his colleague's wife and 11-year-old son.

"We are mourning and I am livid," he wrote.

This report by The Canadian Press was first published Jan. 12, 2020.

Iran believed to have shot down airliner: Trudeau