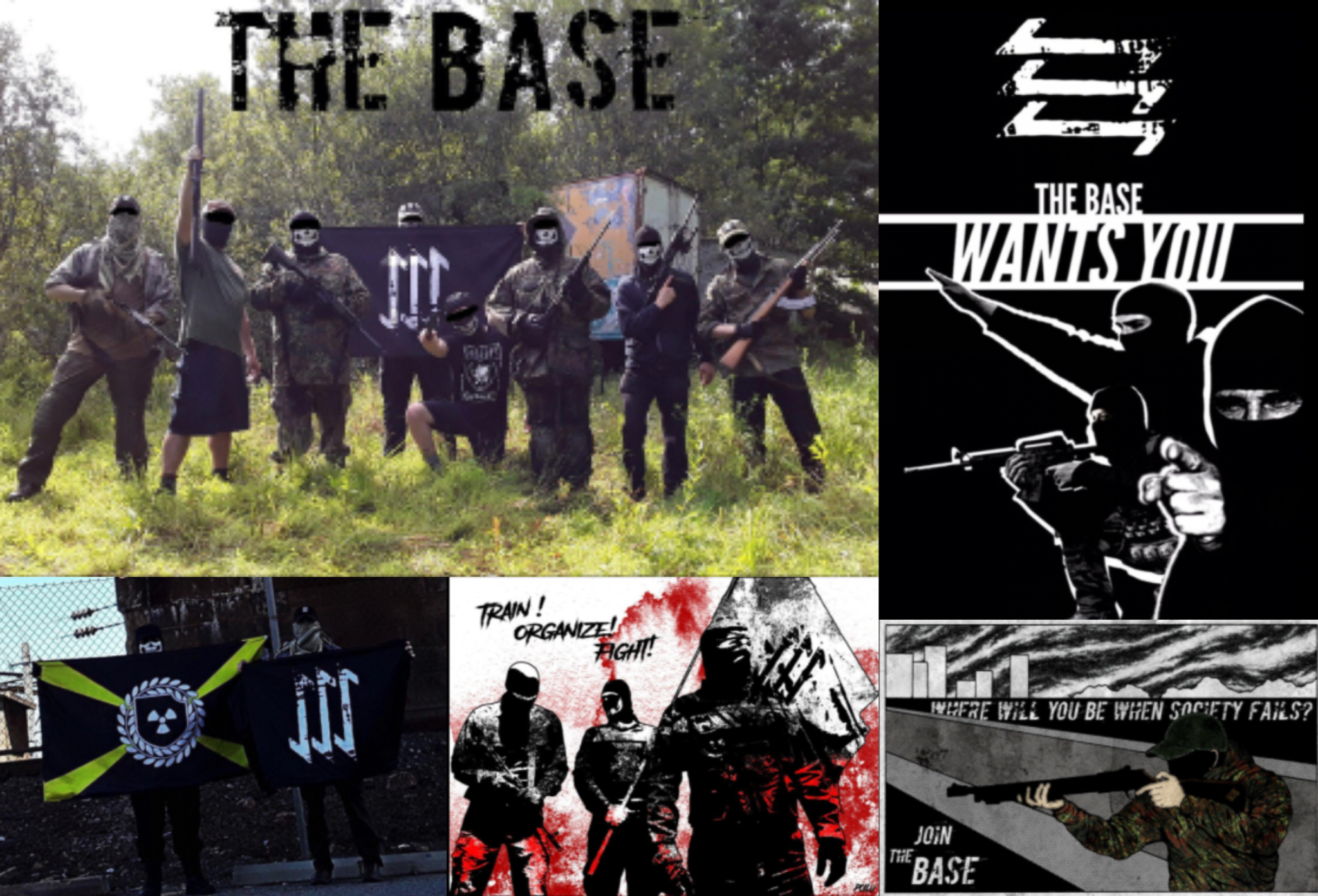 Propaganda posted on social media by The Base, a violent neo-Nazi group with members in the U.S. and Canada.
Previous story
Next story

When former Canadian Armed Forces reservist Patrik Mathews was taken into custody last week along with two other suspected members of the violent neo-Nazi group called The Base, the 26-year-old explosives expert had been in hiding in the U.S. for nearly five months. During that time, he reportedly provided training to other extremists, turned a semi-automatic rifle into a functional machine gun and even discussed plans to open fire at a pro-gun rally at the Virginia State Capitol.

The arrests of Mathews and two other alleged Base members, Brian Lemley and William Bilbrough, came just days before the gun rights rally in Richmond, Va., which had sparked fears of potential violence but reportedly went off without any major incidents. According to the criminal complaints, Mathews and his alleged co-conspirators discussed plans to travel to the rally and had recently purchased more than 1,600 rounds of ammunition in addition to body armour accessories. They also allegedly discussed opening fire from different positions around the rally in order to cause maximum chaos.

The trio was reportedly planning for a potential race war to ensue in the aftermath of the rally, reflecting a core tenet of the ideology underlying neo-Nazi accelerationist groups such as The Base and Atomwaffen. Fuelled by a desire to destroy what they view as a degenerate and corrupt society, members of accelerationist groups seek to use violence to hasten societal collapse in order to set the stage for the creation of a new society, usually envisioned as a white ethnostate. While accelerationism has existed for years as a fringe concept, it has more recently been adopted and repurposed by some of the most violent subgroups within the white supremacist movement.

On Friday, three additional members of The Base were arrested and charged by authorities in Georgia. According to an affidavit, the three men were allegedly planning to murder two antifascists in retaliation for their work exposing the identities of white supremacists. More arrests may be coming soon, according to Jay Tabb, executive assistant director for the FBI’s National Security Branch. At an event on Friday, Tabb said there’s a “strong possibility” of more charges and “additional subjects” in the future.

Though groups like The Base have a relatively limited presence in Canada, they’ve already made headlines for their efforts to infiltrate Canada’s armed forces in order to obtain combat skills. The chief propagandist for Atomwaffen ⁠— whose distinct “terrorwave” aesthetic plays a major role in the group’s hate-based propaganda campaigns ⁠— is believed to live in Ontario. Another member has discussed plans for creating a hideout in British Columbia that would double as a white ethnostate.

There’s also evidence that The Base and Atomwaffen are trying to expand their presence in Canada through on-the-ground recruitment efforts, according to Anti-Racist Canada (ARC), an activist collective that tracks the activity of hate groups in Canada.

"The numbers within these organizations, which are considered to be the most extreme, are relatively small, [but] the small number does not negate their threat,” ARC told National Observer in an email. “They operate in small cells … and their goal is maximum destruction to both infrastructure and human life.”

The Base and Atomwaffen are apparently trying to expand their presence in Canada through on-the-ground recruitment efforts in locations throughout Canada.

The Base and ‘Credible threats of violence’

While The Base operates mostly online, the arrests this week show that the group may be prepared to act on their violent rhetoric. For a terror cell seeking to spark civil war by inciting unrest, a heated gun rights rally in the former capital of the Confederacy would provide a uniquely volatile situation and plenty of opportunities to exploit it.

“This includes extremist rhetoric similar to what has been seen before major incidents, such as Charlottesville in 2017,” he warned, referring to the deadly Unite The Right rally in August 2017, when a white supremacist plowed his car into the crowd, killing anti-racist activist Heather Heyer and injuring nearly two dozen others.

An executive order released by the governor’s office cited “credible intelligence” suggesting that “tens of thousands” of people, including white supremacist extremists and armed militia members, were planning to gather at the Capitol to engage in “violence, rioting, and insurrection.”

The rally was spearheaded as a “lobbying day” for The Virginia Citizens Defense League (VCDL), a far-right pro-gun group. The event, which happens every year, brings gun rights supporters together to lobby lawmakers in favor of laxxer gun control laws.

But this year, far-right extremist groups and anti-government militias also pledged to attend the rally, and some have discussed plans to bring weapons and engage in violence. A handful of participants from 2017’s deadly “Unite the Right” rally in Charlottesville reportedly planned to show up, as well. On social media, users flooded private and public message boards to discuss plans for the rally and dial up the already-heated rhetoric with talk of violence and weapons. Many also raised the idea that the rally could kickstart the “boogaloo” — a term used by some on the far-right to refer to a coming civil war or insurrection, or in some cases, a race war.

A startling trend among far-right extremists

While much of this online activity is carried out for propaganda purposes, the very real potential for violence is evidenced in the details surrounding the FBI’s case against Mathews and his alleged co-conspirators.

His arrest by U.S. authorities and his reported plans to engage in an armed standoff in Virginia reflect a startling trend among far-right extremists, who are increasingly using social media and private message boards to coordinate activities and training, raise money, organize public demonstrations and communicate with a global network of like-minded extremists. While the extreme right was once a loosely connected web of individuals and groups whose ideologies and activities were bound by geography, the picture of the far-right today is one of an organized global movement coalescing around shared grievances, and in some instances, a shared desire to use violence to achieve their goals.

In this case, authorities arrested the suspects before they could complete any plans they may have had for the rally, but they weren’t lone wolves. The Base and associated groups like Atomwaffen have already been linked to numerous murders and hate crimes, and are considered to be a serious threat to national security in the U.S., Canada, and beyond.

“While the number of their members may be low, the number of people following these groups and in the same circles sharing a similar ideology is a larger threat than anybody has acknowledged yet,” Evan Balgord, the Executive Director of the Canadian Anti-Hate Network, told National Observer. “Their influence reaches across borders in the form of propaganda and recruitment.”

“These groups will be responsible for terrorist attacks if they aren't stopped,” he warned.

The current wave of

The current wave of "nationalist" and fascist far right groups coming out of the closet to run for public office on platforms of fear and hate has emboldened many of the groups espousing violence to erupt from their "dark web" networks into the light of day adopting the recruiting tactics of terrorist groups operating globally.

Ironically, the very people they claim to hate: ethnic extremists, frequently provide them with rhetoric and tactics that allow them some ability to infiltrate normally staid and sane discourse. The casual acceptance of domestic terrorists as some "very fine people" has only poured fuel on the ambitions of the warped to become movers and shakers in the creation of an authoritarian society that gives them wet dreams.