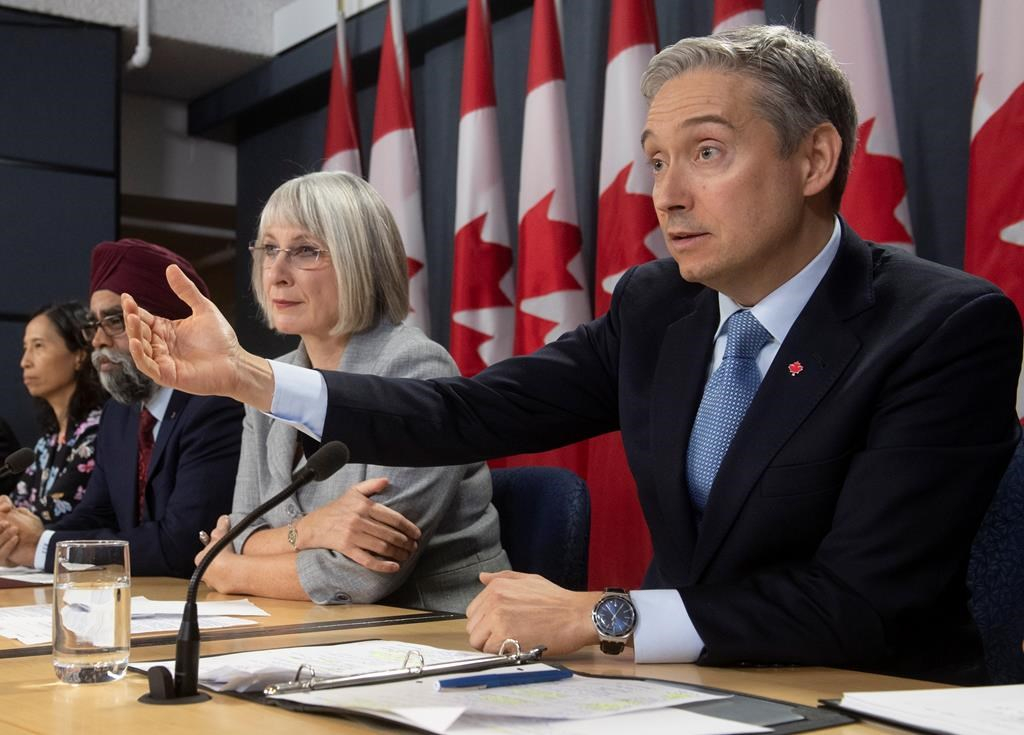 Theresa Tam, Harjit Sajjan and Patty Hajdu look on as Francois-Philippe Champagne responds to a question during an update on the coronavirus situation on Monday, Feb. 3, 2020 in Ottawa. Photo by The Canadian Press/Adrian Wyld
Previous story
Next story

The Liberal government insisted China let parents and other primary caregivers accompany their Canadian children after leaving Wuhan, the epicentre of an outbreak of the novel coronavirus, even if they are not citizens themselves.

A chartered plane will soon be in Hanoi, Vietnam, where it will wait to pick up Canadian citizens — and some permanent residents accompanying their children — from Wuhan, the city of 11 million people in the central Hubei province that is currently under quarantine in response to the outbreak.

The federal government is awaiting final approval from the Chinese government to fly through the restricted airspace and land at the closed airport in Wuhan, but Champagne said other preparations are already well underway.

"We will be in touch with Canadians in Wuhan later this afternoon to provide them all the necessary details," Champagne said.

Federal Health Minister Patty Hajdu said 304 Canadians have asked for assistance to return home, but only 280 have Canadian passports.

The numbers remain fluid and Canada has secured a second flight, as well as seats on other flights, should they be needed.

Indeed, only a few hours after Hajdu's update, a Foreign Affairs official briefing the House of Commons health committee pegged the number seeking to leave China at 312.

China is allowing only foreign nationals from all countries to board repatriation flights, but Champagne said Canada insisted that children be able to fly with their primary caregivers, even if they are permanent residents, and China agreed to let this happen.

That will not apply to families where no minors are involved.

Hajdu said China will not allow anyone who is showing symptoms of coronavirus to board a flight to leave the country, even if they are Canadian citizens, as part of that country's efforts to control the spread of the coronavirus.

"I don't anticipate we will be able to get the Chinese to concede on that point," Hajdu said.

Those who remain will be offered consular services from the rapid deployment team already on the ground in Wuhan.

Passengers will be screened twice — once by Chinese authorities and then again before they board — and will be monitored during the flight for possible symptoms of the virus.

If any fall ill, they will be transported to a health facility in British Columbia while the plane refuels. Otherwise, passengers will not be allowed to leave the plane until they arrive at Canadian Forces Base Trenton, where they will be held in isolation for 14 days.

The Ontario base was chosen because it has the space to allow large numbers of people to be processed quickly, and a facility where people can be housed with dignity, Hajdu said.

"I want to remind people that these are Canadians who have been through a very traumatic experience over the past couple of months and in many cases will have significant stressors," Hajdu said.

The repatriated Canadians will be housed at the nearby Yukon Lodge until they are cleared to return home.

"Part of the reason we're offering social support is they will also be isolated from one another," Hajdu said. "So if one person falls ill, that won't necessitate the start of an entire other quarantine for all of the passengers."

Opposition MPs questioned Monday why it is taking so long for Canada to repatriate its citizens when other countries have already done so. In the House of Commons, deputy Conservative leader Leona Alleslev suggested the "hold up" is due to Canada's "disastrous" relations with China.

Champagne flatly denied that and said China has been very co-operative in the effort to repatriate Canadians.

Officials with Foreign Affairs, Transport Canada and Public Safety later echoed that view and told the Commons health committee that they don't see how Canada could have acted any faster.

Heather Jeffrey, assistant deputy minister for consular security and emergency management at Global Affairs Canada, noted that the number of Canadians asking to be evacuated has jumped from none to over 300 in a matter of days. Documentation and authorizations must be obtained for each one to enable passage through multiple check points within Hubei province, where unprecedented travel restrictions have been imposed in a bid to prevent spread of the virus.

Whereas, other countries have consular missions in China's Hubei province, Jeffrey noted that Canada does not.

"With a pandemic response of this nature, it's the first time we've had to assist such a large number of Canadians from within a quarantine zone."

Canadian evacuees to be quarantined

10,000 with coronavirus now, but only three in Canada

Trudeau says government will airlift 200 Canadians out of China