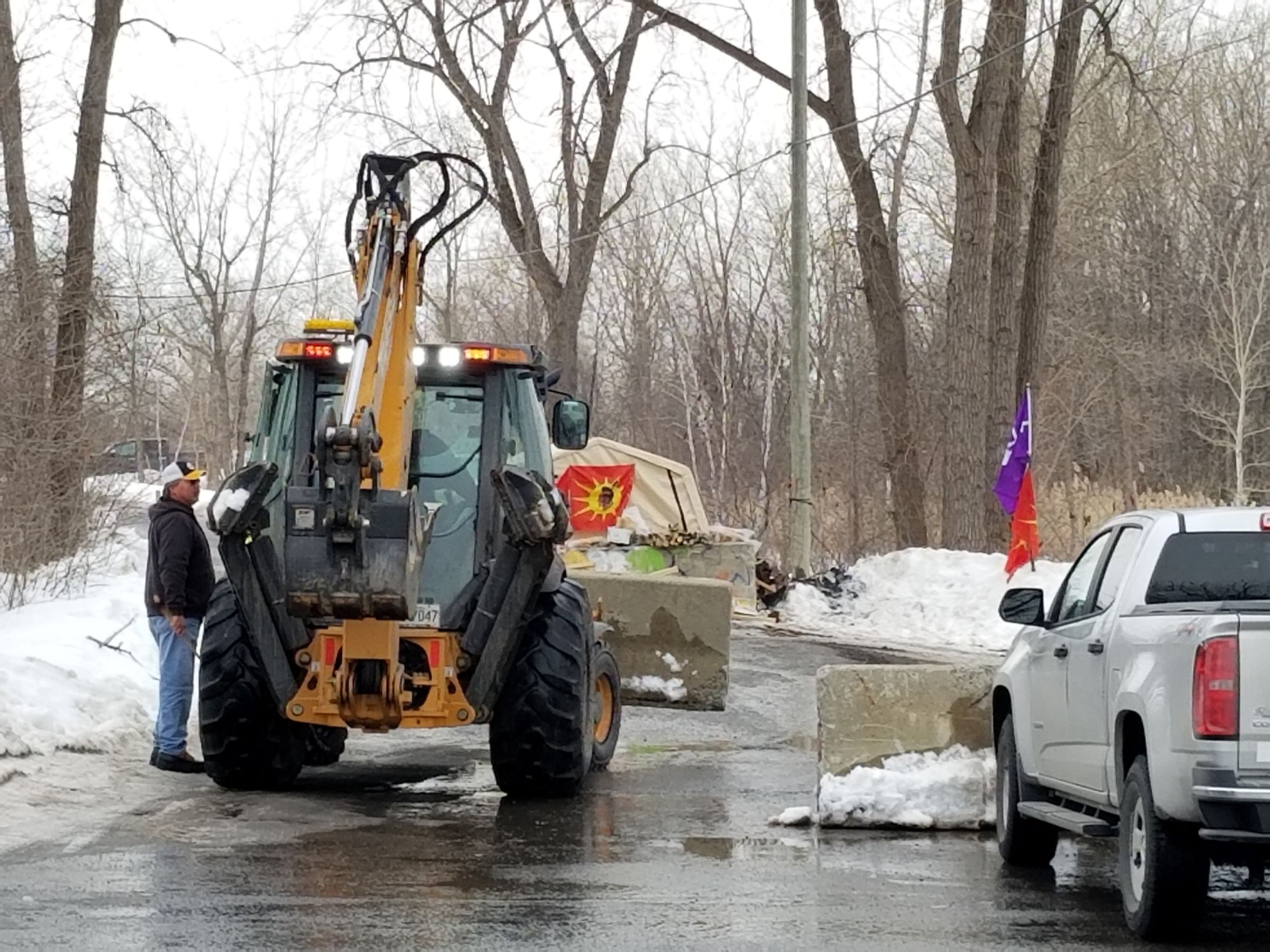 Defiant in the face of recent injunctions Kahnawake Mohawks add cement roadblocks at the entrance to the rail line blockade on their territory across the Mercier Bridge from Montreal, Quebec. February 25, 2020. Photograph by Michael Bramadat-Willcock
Previous story
Next story

The Mohawks of Kahnawake have no intention of dismantling a rail blockade on their territory near Montreal despite an injunction issued on Tuesday that one official called a “provocation.”

Defiant yet seemingly calm Kahnawake Mohawks continued to add cement barriers and bring in supplies to the blockade site.

People came and went from the scene of the blockade. Supporters chatted with Peacekeepers - the Kahnawake Mohawk police force - who were on site.

“Another day, another injunction” said one supporter on the ground. Several freight trucks honked in support as they passed by the blockade.

The Kahnawake blockade, which has restricted freight and commuter train traffic between downtown Montreal and the South Shore since early February, is in solidarity with Wet’suwet’en hereditary chiefs who oppose the planned Coastal GasLink pipeline that would cut through their traditional territory in northern British Columbia.

“People are still quite clear that they want to continue the blockade in support of the Wet'suwet'en chiefs,” Kenneth Deer, secretary of the Mohawk Nation at Kahnawake, told National Observer in a phone interview.

More Wet’suwet’en solidarity protests sprung up in various locations across Canada on Tuesday, a day after Ontario police moved on a weeks-long blockade by Tyendinaga Mohawks near Belleville that had shut down a major transport route between Toronto and Ottawa and Montreal.

“The whole issue has always been imposition of the will of Canada onto Indigenous peoples and their territory. We have to continue to resist,” Deer said.

Deer said that land is central to the context of conflicts between Indigenous peoples and government in Canada more broadly.

“All of these flashpoints are always about land. It’s our land. It’s our territory. How did all that land become theirs? How did it all become Canada’s?,” Deer said.

The prospect of a drawn out confrontation on Mohawk Territory in Quebec brings back painful memories in the province.

“Another day, another injunction” said supporter on the ground at Montreal area blockade. Several freight trucks honked in support as they passed by the blockade.

The 1990 Oka Crisis, also called the Mohawk Resistance, was a dispute over territory between the Kanesatake Mohawks and the Town of Oka, northwest of Montreal.

Oka planned to develop a golf course and condominiums on land that includes Mohawk burial grounds in an area called the Pines.

Quebec police moved against several other disruptions on Tuesday, but not in Kahnawake. Injunctions were also issued against protests in Lennoxville in the Eastern Townships region of Quebec and Listuguj, in the Gaspé Peninsula.

Police arrested an estimated 20 people in Lenoxville as they attempted to dismantle a blockade erected on Tuesday morning.

In Listuguj, Mi'gmaq Wet'suwet'en supporters refused to leave after police approached their barricades on a railway line between Quebec and New Brunswick.

Earlier on Tuesday Premier François Legault implied that the Sûreté du Québec provincial police force has been working on a plan to dismantle the barricades but did not provide specifics.

"I trust the Sûreté du Québec to take all steps necessary to act with the Peacekeepers," Legault said at a Montreal event.

Legault has also stated that some of the Mohawks in Kahnawake are armed and mentioned the Oka Crisis. However no weapons were visible at the site of the blockade and Mohawks categorized the Premier’s statement as inflammatory.

The Mohawk Council of Kahnawake is considering challenging the injunction, and has indicated its own police force has no intention of enforcing it.

“First and foremost, we must make it clear to our own people that this injunction will not be executed on this territory,” Grand Chief Joseph Tokwiro Norton said in a statement.

He said it was “truly unfortunate” that Canadian Pacific sought the injunction, which he said “will only add to the problems at hand.”

”History reminds us that the proper approach to addressing issues is through dialogue and discussion – not by sending in police, he said”

The provisional injunction was granted in response to a request from CP Rail by Quebec Superior Court Justice Michel Pinsonnault.

Deer said that the injunction came as a surprise to him since he felt that their previous relationship with the railway had been positive.

He said Kahnawake Mohawk supporters intend to hold their ground and continue the blockade until Wet'suwet'en hereditary chiefs in British Columbia indicate they are satisfied that their demands have been met.

“They [the hereditary chiefs] want the tactical unit of the RCMP off their territory and they want the pipeline stopped while negotiations happen. That’s what they want and we’re here to support them to get to that point,” said Deer.

Wet’suwet’en Hereditary Chief Woos, who also goes by Frank Alec, told National Observer on Monday that the RCMP had said it would take 16 days for them to dismantle a temporary outpost.

Deer said that it is Canada and not the Wet'suwet'en who are breaking the law by moving forward with the Coastal GasLink pipeline project without consent from the hereditary chiefs.

Deer said that the Mohawks of Kahnawake are sympathetic to the people manning the barricades in B.C. and to the Wet'suwet'en chiefs themselves.

“It’s unceded territory. So that’s the rule of law and it’s Canada that’s violating that rule by imposing [this pipeline] on Wet'suwet'en territory without the consent of the chiefs who are the title holders of that land,” he said.

“We’re hoping that negotiations in B.C. will come to a settlement,” said Deer.

WE STAND WITH YOU, BRAVE

WE STAND WITH YOU, BRAVE KAHNAWAKE MOHAWKS!