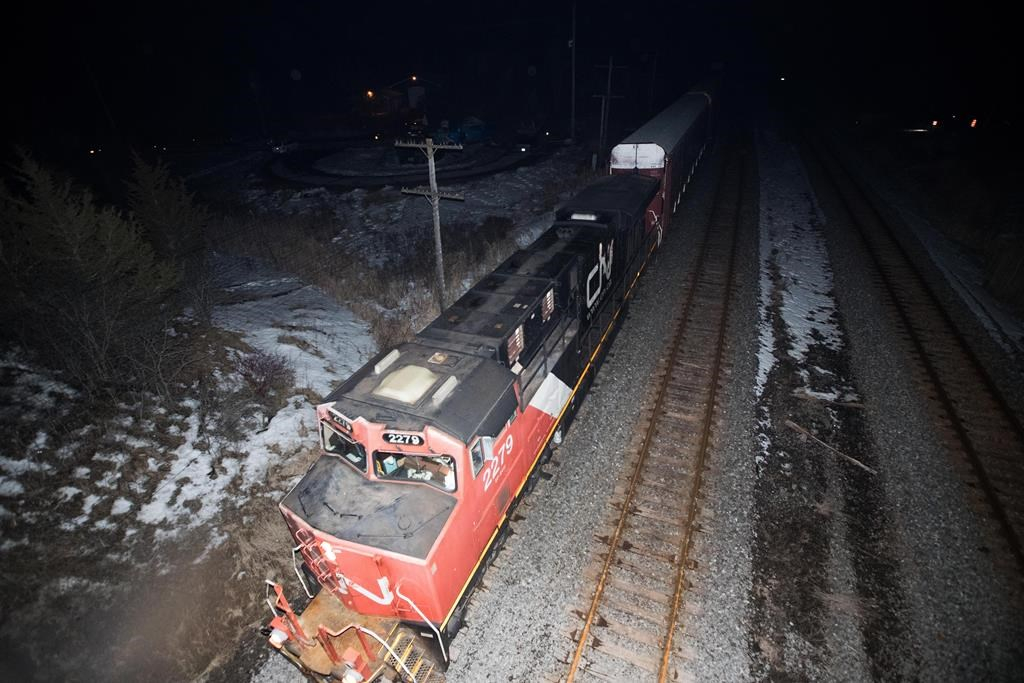 A CN train travels through Tyendinaga, near Belleville, Ont., on Monday, Feb. 24, 2020, after police removed the blockade in support of Wet'suwet'en Nation hereditary chiefs. Photo by The Canadian Press/Lars Hagberg
Previous story
Next story

Toronto police say they have made three arrests after a protest emerged Tuesday evening in the city's west end as part of ongoing demonstrations in support of a British Columbia First Nation.

Police say in a tweet this morning that officers provided protesters with an injunction and began moving them from rail tracks.

They say most were co-operative, but "arrests were made when necessary."

The blockade threatened to delay morning commutes west of the city, but police say the rail line has been cleared.

Nationwide rail and road blockades have been popping up for weeks as a show of support for the hereditary chiefs of the Wet'suwet'en Nation in northwestern B.C. who oppose a natural gas pipeline project cutting across their traditional territory.

In the last two days, demonstrators set up new sites in Ontario and Quebec, including one that has affected a major commuter rail system serving a huge swath of southern Ontario.

A protest at a Hamilton GO station caused numerous cancellations and delays since Monday evening, but local police said protesters left the blockade site in the city peacefully at around 5 p.m. Tuesday.

Other new disruptions that surfaced Tuesday include a blockade along a highway near the site of an ongoing land dispute in Caledonia, Ont., and one along a stretch of rail in Sherbrooke, Que., about 150 kilometres east of Montreal.

Several high-profile blockades were dismantled by police in B.C. and Ontario earlier this week.

Federal Indigenous Services Minister Mark Miller has said Ottawa is still committed to peacefully resolving the situation that has hampered freight and passenger travel in much of the country for nearly three weeks.

This report by The Canadian Press was first published on Feb. 26, 2020.