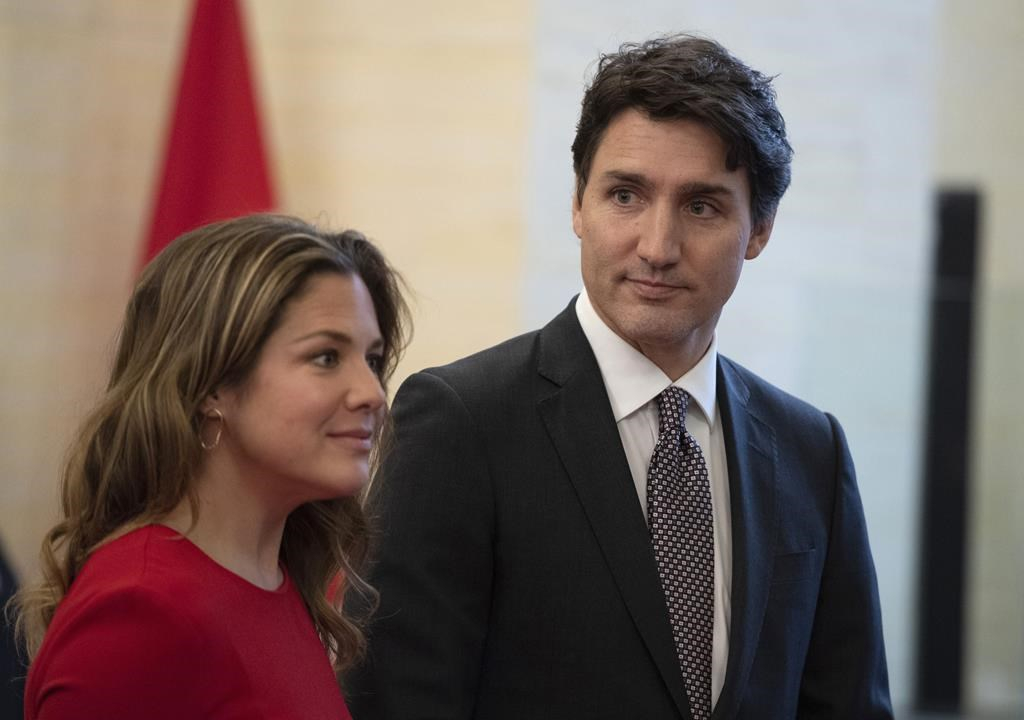 Prime Minister Justin Trudeau and his wife Sophie Gregoire wait for the arrival of Governor General Julie Payette before the Throne Speech at the Senate in Ottawa, on Thursday, Dec. 5, 2019. File photo by The Canadian Press/Justin Tang

Canada's prime minister is self-isolating and working from home, while his wife, Sophie Grégoire Trudeau awaits test results for the COVID-19 virus after she showed "mild flu-like symptoms."

The turn of events means that a two-day in-person summit between Trudeau and Canada's Indigenous leaders and premiers that was planned for Thursday and Friday in Ottawa has been postponed.

I have some personal news to share today. Sophie recently returned from a speaking event in the UK, and last night she was experiencing mild flu-like symptoms. She‘s feeling better, but following the advice of our doctor she is self-isolating as we wait on COVID-19 test results.

Instead, Trudeau and Deputy Prime Minister Chrystia Freeland will speak with premiers over the phone to discuss actions to limit the spread of the coronavirus disease in Canada, the Prime Minister's Office confirmed Thursday.

Chantal Gagnon, deputy director of communications for the Prime Minister's Office, said in a statement that Sophie Grégoire Trudeau had recently returned from a speaking engagement in London, U.K., and "began exhibiting mild flu-like symptoms including a low fever late last night."

"She immediately sought medical advice, and is being tested for the COVID-19 virus. She is self-isolating at home awaiting test results, and her symptoms have since subsided," said Gagnon.

"Out of an abundance of caution, the prime minister is opting to self-isolate and work from home until receiving Sophie’s results."

Prime Minister Justin Trudeau and his wife are in self-isolation over COVID-19 concerns, which has forced the cancellation of an in-person meeting of Canada's first ministers.

NDP Leader Jagmeet Singh also said Thursday he was "at home today, feeling unwell." He said he had talked with a doctor who did not believe he had COVID-19 symptoms, but he was advised to limit contact with the public.

Friends, I am at home today, feeling unwell.

I have been in contact with a doctor and they do not believe I have symptoms consistent with COVID19. But their advice is for me to limit contact with the public until I am feeling better.

Majority of Canada could be at risk: Hajdu

The World Health Organization has declared COVID-19 a global pandemic. There are 103 confirmed cases of COVID-19 in Canada, as of March 11, according to the Public Health Agency of Canada.

Health Minister Patty Hajdu told a parliamentary committee Wednesday that it was "safe to assume" that between 30 per cent and 70 per cent of the Canadian population could "acquire" COVID-19.

The public health agency says Canadians should stay home, if they can, if they have "even mild symptoms" and call their public health authority in their province or territory for advice.

There is a heightened risk of worse outcomes for Canadians who are over the age of 65, or who have compromised immune systems or other medical conditions.

Chief Public Health Officer of Canada, Dr. Theresa Tam, said in order to slow the spread of the virus, "good hygiene practices" like frequent hand washing, staying home if possible when sick, and "social distancing" are all useful.

"The federal government is, and will continue to provide leadership in partnership with the provinces, territories and all Canadians” with respect to the virus, said Freeland.

In response to a question from Conservative Party deputy leader Leona Alleslev about whether federal employees would be allowed to telework, Treasury Board President Jean-Yves Duclos said he took seriously the responsibility to ensure a safe and healthy workplace.

“The Treasury Board has very clear directives to ensure that when the time is right, the appropriate services will be offered to employees of the Canadian government," said Duclos.

Meanwhile Bloc Quebecois labour critic Louise Chabot pressed the government on whether it would ease the rules for Employment Insurance due to the processing time for applications delaying payouts.

Employment Minister Carla Qualtrough said the government had already removed the wait time for EI benefits for sick leave and "will continue to consider other measures" including for Canadians who don't qualify for EI.

Due to the COVID-19 pandemic, we will be suspending all future public campaign events for the foreseeable future.

As the virus spreads around the globe, events are unfolding at a rapid pace.

The United States decided Wednesday to ban incoming travel from most people who have been in 26 European countries. On Thursday morning, Freeland said Canada had been blindsided by the decision.

On Thursday afternoon one of Canada's largest conservative political conferences, the Manning Networking Conference, which had been scheduled in two weeks, was cancelled.

Conservative leadership candidates Peter MacKay and Erin O'Toole said they would be suspending all public campaign events due to the COVID-19 pandemic.

Given the ongoing situation with COVID-19, our team will be suspending all public campaign events after today.

We will be continuing to monitor advice from public health officials.

The Parliamentary Press Gallery said it was taking actions to put more space between reporters and MPs on Parliament Hill, introducing new measures like cleaning equipment with disinfectant wipes and the use of gloves, and will be considering other measures.

Editor's note: This story was updated at 3:37 p.m. Eastern Time on March 12, 2020 to include various additional updates from Question Period.