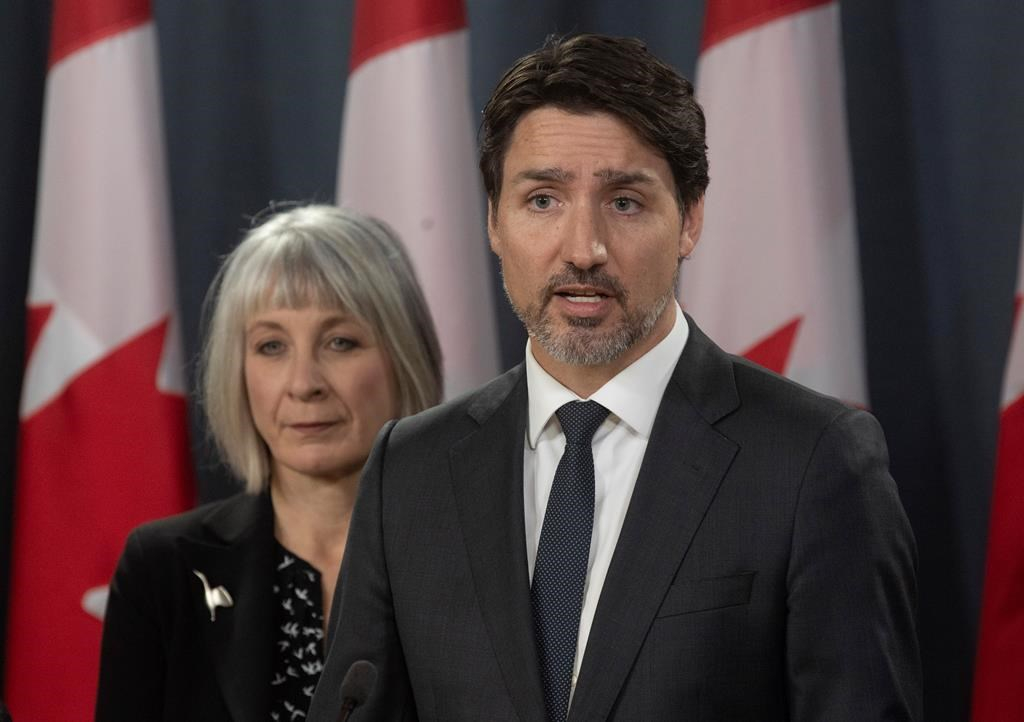 Minister of Health Patty Hajdu looks on as Prime Minister Justin Trudeau speaks during a news conference on the coronavirus situation, in Ottawa, on Wednesday, March 11, 2020. Photo by The Canadian Press/Adrian Wyld
Previous story
Next story

The federal government rolled out a $1-billion package Wednesday to help the country's health-care system and economy cope with the novel coronavirus outbreak as the number of cases in Canada grew, Prime Minister Justin Trudeau warned that the situation could get worse, and the World Health Organization declared COVID-19 a global pandemic.

Multiple health authorities reported a flurry of new positive tests for COVID-19, including one person at Canadian Forces Base Trenton repatriated from a cruise ship docked in California, and a man in Sudbury, Ont., who had attended a large mining conference in Toronto.

O'Regan and Ng are in self-isolation awaiting test results after showing symptoms of a respiratory illness, although O'Regan believes he has a simple head cold and Ng thinks she is suffering from asthma and a cold.

With more than 118,000 people sickened around the world, including more than 100 in Canada, the WHO called on countries to mitigate the social and economic impacts while minimizing the disruption to everyday life.

Trudeau said Canada's government is considering more measures to contain COVID-19, such as what to do with incoming cruise ships, on which the disease has been known to spread, while warning cases could climb.

He demurred on when the government would opt for stricter measures like community-wide lockdowns, such as those in China and Italy.

"It's not about time. It's about the situation and the facts on the ground. We will closely monitor what is needed to be done to keep Canadians safe," Trudeau said, flanked by key ministers and Canada's chief public health officer.

"While we are prepared for a wide range of scenarios, we will focus right now on what needs to be done now and endeavour to make sure that is enough, that we don't have to take future steps."

In Washington on Wednesday night, President Donald Trump said the U.S. will suspend all travel from Europe, excluding the U.K., starting Friday for 30 days.

The outbreak has caused an upheaval in the Canadian economy, the cancellation of major conferences and events like the World Figure Skating Championships that were scheduled for next week in Montreal, changes in travel plans and workplace travel bans like those now imposed on parliamentary groups. Yukon Premier Sandy Silver said on Twitter he won't attend a meeting with Trudeau and other premiers beginning Thursday "out of an abundance of caution."

The Public Health Agency of Canada says the risk to the general population is low and most people diagnosed with COVID-19 experience manageable symptoms like a fever or cough. For some, such as seniors and those with compromised immune systems or pre-existing conditions, the illness can be more severe.

The first presumptive case east of Quebec was reported on Wednesday in New Brunswick.

Jennifer Russell, the province's chief medical officer of health, says the case involves a woman between 50 and 60 years old in the southern part of the province. The woman recently travelled from France and is in self-isolation.

Among the Canadians diagnosed with the illness so far, fewer than 15 per cent have required hospitalization. One has died, a man who lived in a nursing home in Vancouver.

"I kind of have to quarantine myself from the public," said 24-year-old Paul Redman, who has the genetic lung disorder cystic fibrosis and was on Parliament Hill on Wednesday to meet with MPs about drug regulations.

He added later that Canadians should "be aware that there are people who are very vulnerable out there, such as myself. If (I) get a cold, I could die."

Individual behaviour — like washing hands and coughing into the crook of an elbow — can slow the spread of the infection.

Still, the government has been preparing its response "as if it was a pandemic," said Health Minister Patty Hajdu, adding that the WHO's labelling the outbreak a pandemic wasn't a surprise, nor did it change the trajectory of federal plans. In the afternoon, she told a House of Commons committee the government expects between 30 and 70 per cent of Canadians could contract the disease.

Half of the $1-billion spending package will go to help provinces and territories prepare and react, and pay for protective gear like masks and gowns for health workers. Ontario's government added $100 million for its response Wednesday, which could be used to hire more staff in the province.

A smaller portion of the spending eases access to federal benefits for workers whose livelihoods are disrupted by COVID-19, aiming to make it easier for people with more precarious jobs to stay home, avoid infecting others, and get income supports quickly.

Federal officials are eyeing ways to help those who don't qualify for employment insurance receive benefits, possibly providing grants as was done during the SARS outbreak in 2003.

Federal lending is also going to ramp up to help businesses get credit to handle the economic shock, similar to a program during the financial crisis just over a decade ago that provided $11 billion to 10,000 firms.

The reaction from business and labour groups was that the funding is a start to deal with the uncertainty about the depth and duration of the economic shock to the country.

The Business Council of Canada said it made sense to "hold off on major economic stimulus measures" until more is known. The Canadian Chamber of Commerce called it a "a positive and pragmatic approach to the global risks of the spreading virus."

Hassan Yussuff, president of the Canadian Labour Congress, said the package could help avoid job losses given he has heard stories of impending layoffs in the air-travel industry, and of seafood processors in Atlantic Canada watching demand for exports to China drop.

Politically, the package landed with more of a thud, with opposition criticism that the Liberals waited too long into the outbreak to act.

Conservative finance critic Pierre Poilievre said the Liberal response was short on specifics, including what exactly the spending will achieve, while the party's health critic Matt Jeneroux said he wanted the Liberals to expand arrivals screening for passengers coming from countries where the virus is rampant, including Italy.

NDP Leader Jagmeet Singh said the Liberals should consider getting banks and credit-card companies to ease payments for those affected.

This report by The Canadian Press was first published March 11, 2020.

— With files from Stephanie Levitz and Laura Osman