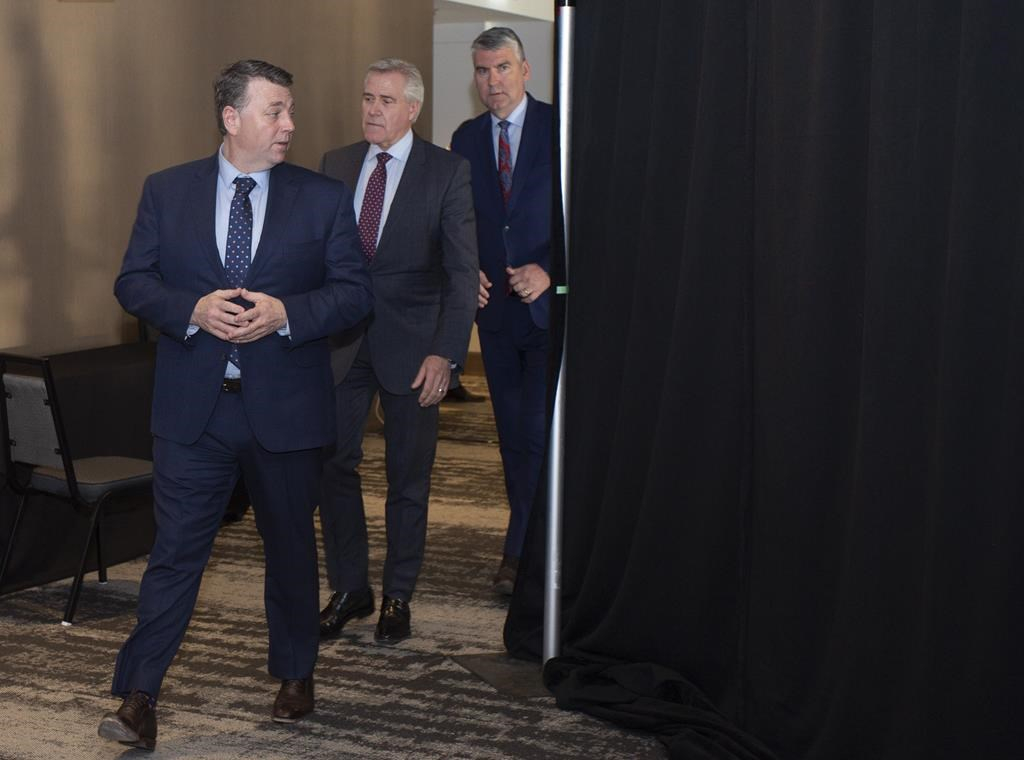 Canada's largest labour organization and the group that bills itself as the voice of business in this country have set aside their differences to jointly confront the economic fallout from the rampaging novel coronavirus — and they're hoping premiers can do the same when they meet with Prime Minister Justin Trudeau.

The heads of the Canadian Labour Congress and the Canadian Chamber of Commerce are trying to arrange a conference call with premiers ahead of Friday's first ministers' meeting to discuss the potentially devastating effect of the pandemic on workers and businesses as the global economy teeters on the brink of recession.

Both organizations have applauded Trudeau's initial $1-billion response plan to the rapidly spreading virus, announced Wednesday, and CLC president Hassan Yussuff says they're not far apart on what more needs to be done.

Yussuff concedes "it may seem unusual" for him to be collaborating with chamber president Perrin Beatty but, he says, "we also recognize it's a moment for the country to come together." And, he hopes, it's an example for premiers, who'll be arriving Thursday in Ottawa for a two-hour meeting with Trudeau and Indigenous leaders before closeting themselves for a daylong first ministers' meeting Friday.

"I hope when the premiers meet on Friday that it's more of a collaborative front as to how we're going to deal with it," Yussuff said in an interview.

"Nobody's going to get (everything) they want, but if we can do something to help the whole country get back on its feet as quickly as possible, I think that would be the best solution. I think for me and Perrin, I'm hoping that our collaboration can show some example of how people need to work with each other at this moment in the history of the country."

Privately, federal officials are hoping the same or, at the very least, that premiers will tone down the bellicose rhetoric, finger-pointing and complaining that often attend first ministers' meetings.

That may prove impossible for some premiers, particularly Alberta's Jason Kenney, who has been at war with Trudeau over federal energy and climate policies that he maintains have destroyed his province's oil and gas industry. He couldn't resist a jab at the prime minister Wednesday just before boarding a flight to Ottawa at the Calgary International Airport.

"We need this government to get refocused on the economy. Enough about dealing with every fashionable issue out there and the virtue signalling, the UN Security Council, all the rest of it," Kenney said. "We are facing an economic crisis in Canada and we need the national government to act accordingly with total focus on that issue."

But the ever-widening ripple effects of the COVID-19 pandemic top the agenda and are expected to wind up monopolizing much of the day.

Yukon's Sandy Silver has announced he won't be attending the meeting at all, out of "an abundance of caution" about the virus. And as of Wednesday evening, New Brunswick's Blaine Higgs' attendance was uncertain.

"I haven't officially cancelled my trip there yet but we are in communications right now with the federal government and with my colleagues basically suggesting that we should be doing this by tele-conference," said Higgs.

Manitoba Premier Brian Pallister will miss at least the Thursday meeting with Indigenous leaders, after opposition parties blocked tabling of his government's budget on Wednesday.

Nova Scotia Premier Stephen McNeil will be coming, looking for some direction from the federal government about the impact of the pandemic on the cruise ship season, which would normally get underway at ports in Halifax and Sydney next month.

"The government made a declaration that Canadians should stay off cruise ships and we have to deal with the issue that cruise ships are coming to us," McNeil said Wednesday, pointing out that potentially thousands of passengers from each ship could be visiting Canadian ports.

"We need Health Canada to be part of that conversation and it may be such a thing as we don't receive (passengers) or, if we do, what are the protocols."

Trudeau was clear that the federal government is already preparing to do more than the initial $1-billion response to COVID-19 announced Wednesday. That includes $500 million to the provinces and territories to bolster their health-care systems, waiving the one-week wait period for workers to claim Employment Insurance if they're quarantined or forced to self-isolate, and more funding for testing, research and personal protective equipment.

More measures are expected in the federal budget, to be unveiled March 30, and more could follow if necessary as the government assesses the reffect of the pandemic on the economy and on specific industries, particularly energy, tourism and aviation.

The energy industry has been hit by a double whammy — plunging oil prices due to both the abrupt reduction in travel around the globe and an oil price war between Russia and Saudi Arabia.

Kenney intends to keep up the pressure for a more generous fiscal stabilization program, which was designed to help provinces that face sudden decreases in revenues, as happened in Alberta when oil prices crashed several years ago. He wants the $60 per capita cap lifted and the change to be applied retroactively, resulting in a $2.4-billion federal payment to his hard-hit province.

Federal Finance Minister Bill Morneau has signalled his willingness to reform the program, but Kenney is unlikely to see anything concrete until the budget in several weeks.

Some premiers still have their own agendas for the meeting, beyond the COVID-19 crisis.

Ontario's Doug Ford, who has moderated his criticism since Trudeau won re-election last fall, is coming to Ottawa with a team of ministers to press for more federal funding for the Greater Toronto Area subway plan, critical infrastructure projects and health-care transfers. He also wants Ottawa to allow Ontario to nominate more economic immigrants to address a skilled labour shortage.

Newfoundland and Labrador's Dwight Ball, meanwhile, wants to talk about federal help to mitigate increases in power rates as a result of the Muskrat Falls hydroelectric project's cost overruns.

"I will not be taking my foot off the gas at all at on areas that impact Newfoundlanders and Labradorians. I'm committed to rate mitigation," he said earlier this week.

This report by The Canadian Press was first published on March 12, 2020

— With files from Keith Doucette in Halifax, Kevin Bissett in Fredericton and Holly McKenzie-Sutter in St. John's.