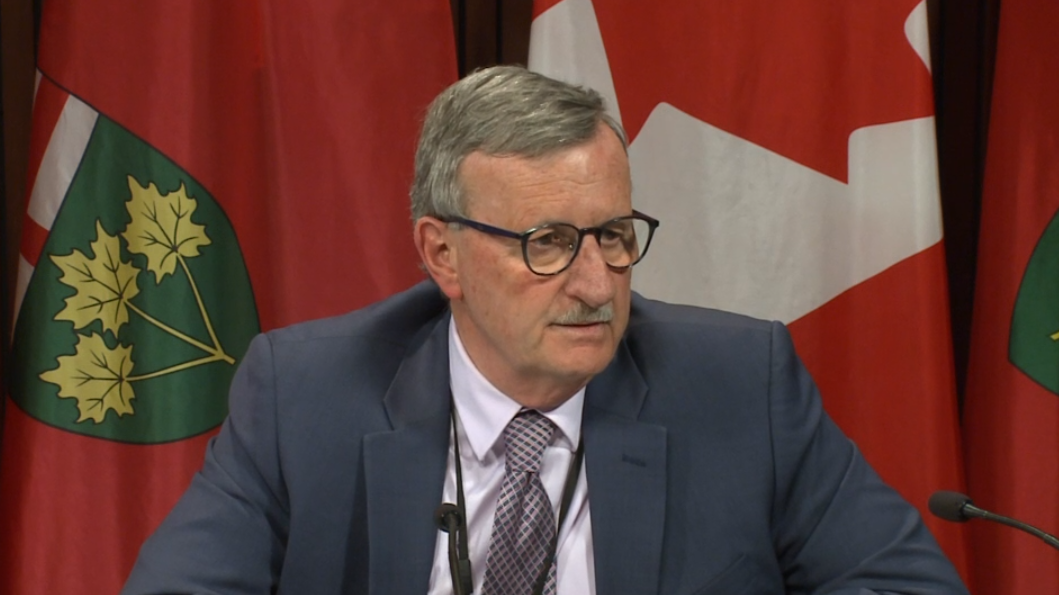 Schools across Ontario will be shuttered for two weeks after next week's break, the provincial government said on Thursday, after unveiling a string of fresh measures to deal with the novel coronavirus and reporting its largest single-day spike in new cases.

Most Canadian cases of COVID-19, the disease caused by the coronavirus, have come as a result of people travelling to other parts of the world where the recently declared pandemic is more widespread.

"This is a time of heightened caution,” the province’s chief medical officer of health, Dr David Williams said. He advised anyone who travels outside of Canada during the March break, which begins at the end of the school day on Friday, to avoid public settings for two weeks.

But Education Minister Stephen Lecce was unable to offer much in the way of specifics as to how the government would support students while they are on extended break.

“I’m committing to parents, there is a plan,” he told reporters at Queen’s Park. “I will report to you in short order.”

Andrea Horwath, the leader of the opposition New Democrats, said it was shocking that the government appeared to be scrambling, with no detailed sense of how it intends to support both parents who need to take time off work and their employers.

She noted there was also no word on whether teachers — who have been battling the government’s education funding cuts with intermittent strikes — would be paid during the extended break.

The health and wellbeing of Ontarians was the government’s top priority, Lecce, Premier Doug Ford, and Health Minister Christine Elliott said in a joint statement announcing schools would be closed until April 6.

Ontario schools to shut for two weeks after March break, perhaps Queen's Park closes too, as province ramps up response to coronavirus.

“We recognize the significant impact this decision will have on families, students, schools, as well as the broader community, but this precaution is necessary to keep people safe,” they said.

The government also put forward a motion to suspend proceedings at the provincial legislature if necessary, which could in turn force the delay of its 2020 budget, scheduled for March 25. Legislative business at Queen’s Park is paused for the March break next week.

The moves followed an earlier announcement of additional steps the Ford government was taking to deal with the growing public health crisis. These included opening more screening centres and expanding lab-testing capacity, a broad public education campaign and other measures to help people self-assess and more easily reach doctors by phone.

The Ford government — which has sought to make deep cuts to healthcare funding including in public health since coming to power in 2018 — also said it was expanding emergency funding to deal with coronavirus to cover 2021.

The province confirmed 17 new cases of people testing positive for COVID-19 earlier on Thursday, bringing the total number of confirmed cases in Ontario to 59. Five of those people have since recovered and are no longer infectious.

The Ford government said it would launch within days at least six dedicated assessment centres within hospitals but separate from other patients in order to rapidly expand screening and ease the pressure being placed on emergency departments.

Dr. Sohail Gandhi, the president of the Ontario Medical Association that represents some 43,000 physicians, said he was pleased to see the government taking steps to protect patients and frontline medical workers and looked forward to further expansion of virtual care.

“Dedicated assessment centres, new physician billing codes for telephone assessments and the creation of a COVID-19 self-assessment tool will help ensure that doctors are able to assess patients in designated settings or to make an initial assessment without the patient coming into the waiting room and potentially putting others at risk,” he said.

The first group of new screening centres will be at The Ottawa Hospital, North York General Hospital, Mackenzie Health, Scarborough Health Network, and Trillium Health Partners, the government said, adding that additional centres will be opened in coming weeks. The Brampton Civic Hospital was initially named in that list but later removed and replaced by the William Osler Health System - Peel Memorial site.

Coronavirus has spread across much of the world since it was first identified in China’s Wuhan in December, with Iran, Italy and South Korea among countries that have been particularly hard hit. Canada’s first identified case emerged in Toronto in late January. The World Health Organization declared COVID-19 a global pandemic on Wednesday.

"While we have so far effectively contained new cases of this virus, we are relentlessly focused on planning for any scenario,” Health Minister Christine Elliott said in a statement announcing the new measures issued before the release of the updated number of cases.

The provincial government said it was extending a one-time 10 per cent increase in funding for municipality public health units for 2020 into 2021. It separately announced a $100 million COVID-19 Contingency Fund on Wednesday.

It had previously sought to cut provincial funding for public health by 27 per cent, or $200 million per year, according to the Ontario Health Coalition, before delaying the implementation of that move amid staunch opposition from municipalities.

The government has tested 4,185 people so far, with 3,590 of those results coming back negative. Health officials are currently investigating 536 cases. Coronavirus symptoms such as fever and cough can turn out to be influenza or another respiratory ailment.

Laboratory testing is currently being conducted at the Public Health Ontario Laboratory, which is located at the Toronto General Hospital across from the Queen’s Park legislature in Toronto, in collaboration with the National Microbiology Laboratory in Winnipeg. The government did not provide further details on their planned expansion of testing.

New Liberal Leader Steven Del Duca called on the Ford government to use emergency legislation to at least temporarily suspend changes it made to the Employment Standards Act giving employers the option of requesting a medical note from employees taking sick leave.

Asked if the government planned to do that, or conversely to block employers from requesting employees get a clean bill of health if they have travelled, a spokesperson for the health minister did not respond directly.

"We continue to urge employer to exercise caution during this time. We're recommending people who may feel ill to stay at home and encourage employers to support that advice," Hayley Chazan said.

Toronto, home to almost 3 million people and where nine of the new cases were identified, said it was activating its Emergency Operations Centre to deal with the escalating issue.

Responding to concerns about large numbers of people travelling outside of Canada next week before returning to Toronto, she stressed the heightened need for such travellers to be particularly vigilant for symptoms, maintain strict hygiene, avoid vulnerable groups such as the elderly and those with chronic disease, and where possible avoid large groups and public gatherings.

“They have a huge role to play in respect of delaying the onset of community spread in our city,” she said.

Editor’s note: This article was updated at 8:40 p.m. Eastern to include comments from Education Minister Stephen Lecce, NDP Leader Andrea Horwath, and Ontario Medical Association President Dr. Sohail Gandhi. It was updated again at 9:28 p.m. with comment from a spokesperson for Health Minister Christine Elliott.