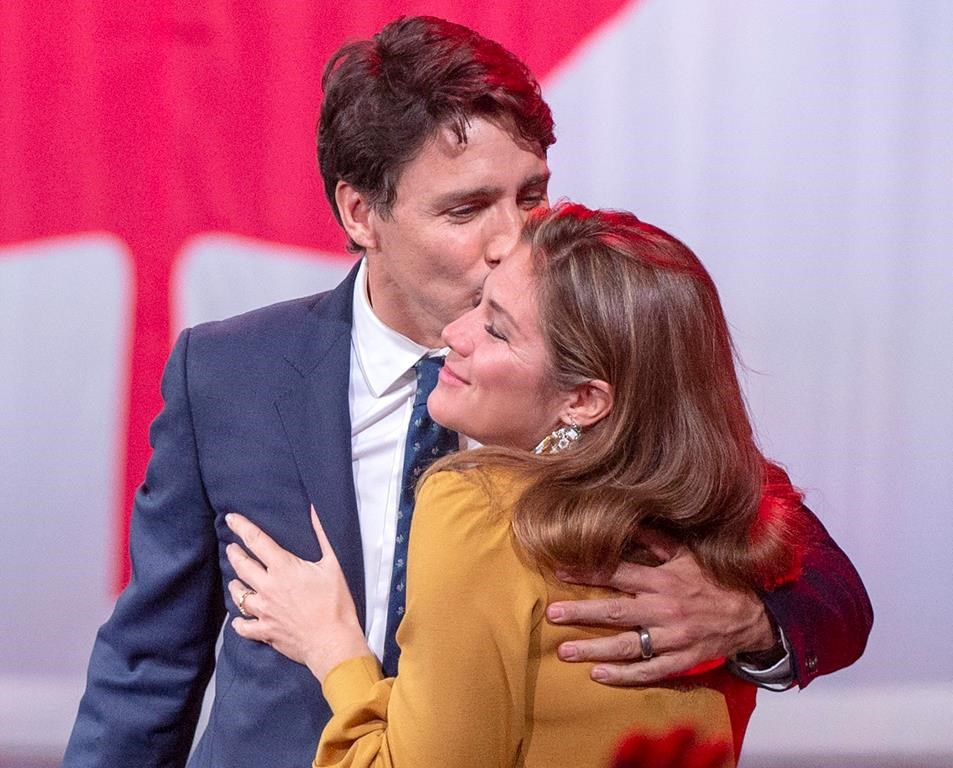 The prime minister's wife, Sophie Gregoire Trudeau, has tested positive for the novel coronavirus and will remain in isolation, his office said Thursday.

"She is feeling well, is taking all the recommended precautions and her symptoms remain mild," the Prime Minister's Office said in a statement.

Prime Minister Justin Trudeau "is in good health with no symptoms," the PMO said, adding that he will follow the advice of doctors and stay in isolation for 14 days.

"Also on the advice of doctors, he will not be tested at this stage since he has no symptoms," the statement said. "For the same reason, doctors say there is no risk to those who have been in contact with him recently."

Gregoire Trudeau thanked people who have reached out to her since she fell ill.

"Although I'm experiencing uncomfortable symptoms of the virus, I will be back on my feet soon," she said in a statement.

"Being in quarantine at home is nothing compared to other Canadian families who might be going through this and for those facing more serious health concerns."

The PMO announcement capped a day where provincial governments advised against international travel and Ontario announced plans to close its schools for two weeks because of COVID-19.

There was a slew of major event cancellations on Thursday, as keeping a distance from others to help prevent the further spread of the novel coronavirus was on full display.

The Juno Awards scheduled for the weekend in Saskatoon was cancelled along with the Canadian Screen Awards in Toronto on March 29. The National Hockey League suspended its season and Major League Baseball ended spring training in Florida and pushed back the start of the season.

Earlier in the day, Trudeau called off a planned appearance at the Public Health Agency of Canada and the scheduled meeting with his provincial, territorial and Indigenous counterparts in Ottawa.

"I was looking forward to sitting down with premiers and Indigenous leaders later today," Trudeau said in a tweet. "Given the circumstances, we'll be postponing our meeting."

While Trudeau had no symptoms, he opted to work from home after his wife reported a low fever late Wednesday night. She had been in London for a speaking engagement, and was at home awaiting test results.

New Democrat Leader Jagmeet Singh said he, too, would work from home after he felt unwell, though he said doctors didn't think it was COVID-19.

The Toronto Raptors advised players, coaches and travelling staff to go into self-isolation for 14 days. The advice followed Monday night's Raptors game against the Utah Jazz in Salt Lake City and the NBA's decision to suspend its season because a Jazz player had tested positive for the novel coronavirus.

Ontario Premier Doug Ford said all public schools will shut down for two weeks after March break, meaning they would not reopen until early next month. Cities across the country cancelled a variety of events including St. Patrick's Day parades, while religious groups called off services. The Assembly of Quebec Catholic Bishops cancelled all Saturday and Sunday masses, noting many parishioners are seniors.

Canada has recorded a single death — an elderly nursing home resident in B.C. — among more than 140 confirmed and presumptive cases of COVID-19, which mostly produces mild or moderate symptoms such as fever and cough. Public health authorities warn that for people aged 65 and over or with compromised immune systems, the illness can be more severe.

The World Health Organization has suggested keeping at least one metre apart from others to prevent spread from coughing, sneezing or direct contact. A recent poll indicated that about 30 per cent of Canadian adults surveyed already said they would avoid concerts, sporting events, and airports.

Hard-hit countries such as China and Italy, which has now all but locked down its entire population of 60 million, have taken stringent measures to keep people apart. Canada's response so far has been far more moderate, but that has begun to change dramatically.

Quebec Premier Francois Legault, whose province had 13 cases, ordered government employees returning from abroad to self-isolate for 14 days. Legault urged other travellers to do the same. Quebec also asked organizers to cancel indoor events where more than 250 people were expected.

"While it hasn't changed a lot here in B.C., the risk has increased all around us, I would say, and our understanding of the situation has also changed," she told a news conference in Victoria.

Alberta's chief medical officer, Dr. Deena Hinshaw, is also recommending that Albertans not travel outside Canada, and that anyone returning to the province from outside the country should self isolate for 14 days.

Manitoba and Saskatchewan reported their first cases and Ontario uncovered 17 more, including one baby. A child-care centre in Suncor Energy's downtown Calgary office tower closed after a child tested positive.

In New Brunswick, the chief justice of the Court of Queen's Bench announced the suspension of jury trials starting Thursday until May 12.

On the stock markets, so-called "circuit breakers" kicked in for 15 minutes to halt another precipitous sell-off as the economic toll of the virulent disease continued to mount. The ongoing rout came 12 hours after U.S. President Donald Trump severely curtailed travel from Europe, but offered few new measures to mitigate the economic impact of the outbreak.

Canada's main stock index plunged an eye-watering 12 per cent on Thursday — its biggest one-day drop in seven decades — as the loonie's slide against the U.S. dollar continued. The United Nations has warned the outbreak could cost the global economy as much as US$2 trillion this year.

Other countries have been stepping up their efforts at social distancing. The U.S. Congress was shutting the Capitol and all House and Senate office buildings to the public until April. Several American politicians have already self-quarantined.

Politicians in Europe, Iran and China are among the estimated 134,000 people worldwide infected with the coronavirus, with deaths approaching 5,000. More than half the known patients have recovered.

Several countries have hardened their borders. The Czech government said it was reinstating checks at its borders with Austria and Germany, and barring travellers from 13 at-risk countries. Other countries, like Norway, have shut down kindergartens, schools and universities.

Britain, which is exempt from the U.S. travel ban, has so far urged people to wash their hands but was expected to take further measures.