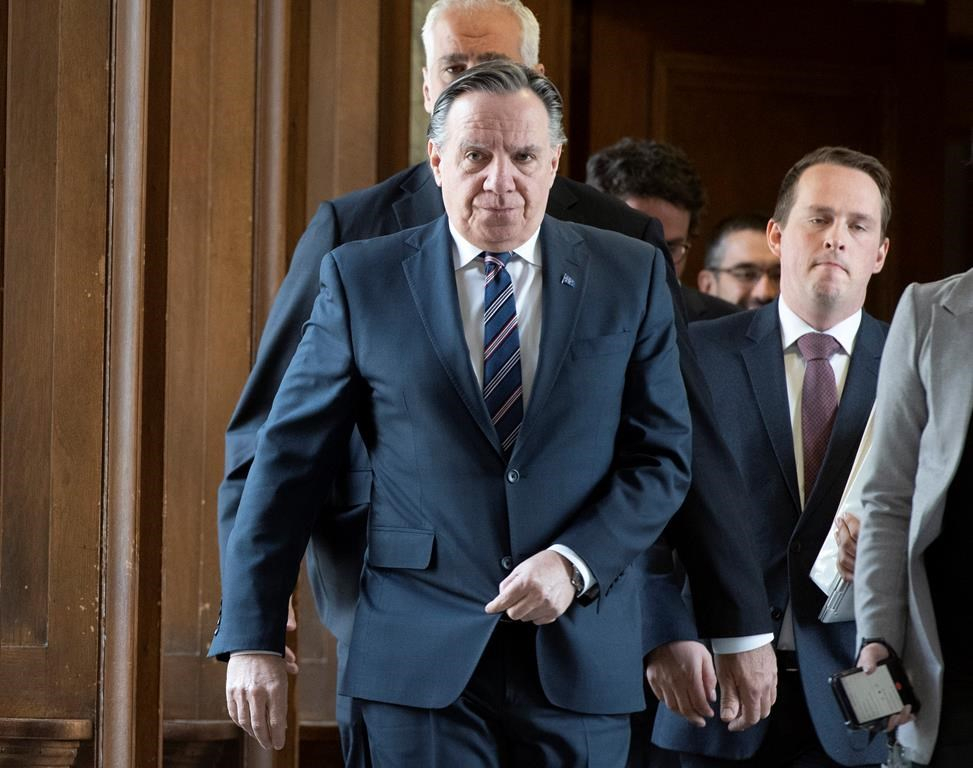 Quebec Premier Francois Legault walks to question period after meeting the party leaders at his office to discuss the next steps to take about the coronavirus, on Mar. 12, 2020 at the legislature in Quebec City. Photo by The Canadian Press
Previous story
Next story

Quebec Premier Francois Legault asked people returning from abroad to self-isolate for 14 days and cancelled large indoor gatherings Thursday as he called on the population to join the fight against the spread of COVID-19.

While the situation remains under control in the province, Legault said, it's time for Quebecers to go into "emergency mode" to ensure the spread of novel coronavirus doesn't turn into a crisis.

"I think the next few weeks will be critical, and it's important we take measures to try not to have too many people contaminated," he said in Quebec City alongside the province's health minister and public health director.

The two-week isolation will be mandatory for public sector workers returning from outside the country, including teachers and health care workers. They will continue to be paid.

He said all indoor events attracting crowds of more than 250 people would be cancelled, and he asked organizers to reconsider any other large gatherings that are not considered essential.

He also asked businesses to allow their workers to work from home if possible and to show understanding to those who have to miss work.

Legault acknowledged the measures will affect everything from sporting events to tourism to the business community, which is already struggling with the effects of a stock market crash.

He said he knew he was "asking a lot" from the population.

"I think we have a major challenge, and if we want to succeed, I need the help of all Quebecers," he said.

"I know I'm asking a lot — not to travel any more, not to go to a show or a hockey game — it's a major change, I understand, but the situation is very critical."

He said he would announce financial measures in the next days to compensate private sector workers and businesses affected by the virus, which has sickened over 120,000 people in 100 countries worldwide.

He said the province isn't excluding the possibility of taking more drastic measures, such as closing schools, if the situation escalates.

"We're not there yet," he said. "But at this moment we can't rule anything out."

Currently, there are 13 confirmed cases in the province, and two people are hospitalized. All of the cases are linked to international travel, and the virus does not appear to be spreading locally, the province's director of public health said.

Horacio Arruda stressed that the measures being taken are preventive.

"We are not in crisis, because we have not lost control of the situation," he said. "(But) we could be in crisis, and what we want to do is prevent the crisis."

Most people diagnosed with COVID-19 experience mild or moderate symptoms, such as fever and cough, and the vast majority of those who contract the virus recover. However, for some, including Canadians aged 65 and over, those with compromised immune systems and those with pre-existing conditions, the illness can be much more severe.

Danielle McCann, the province's health minister, said the health network is ready to handle an eventual rise in cases. She said the province is "actively working" to expand testing, including the possibility of testing people at home.

Montreal Mayor Valerie Plante announced the city will close all its libraries, arenas and swimming pools to prevent the spread of COVID-19. The closings, which also include the city-run planetarium and botanical gardens, will take effect Friday.

"It is a major response to a major situation," she said.

The city's subway system will remain open, in part because it is an essential mode of transportation for health-care workers, but Plante encouraged employers to allow flexible hours so people can avoid rush-hour travel.

— By Morgan Lowrie in Montreal