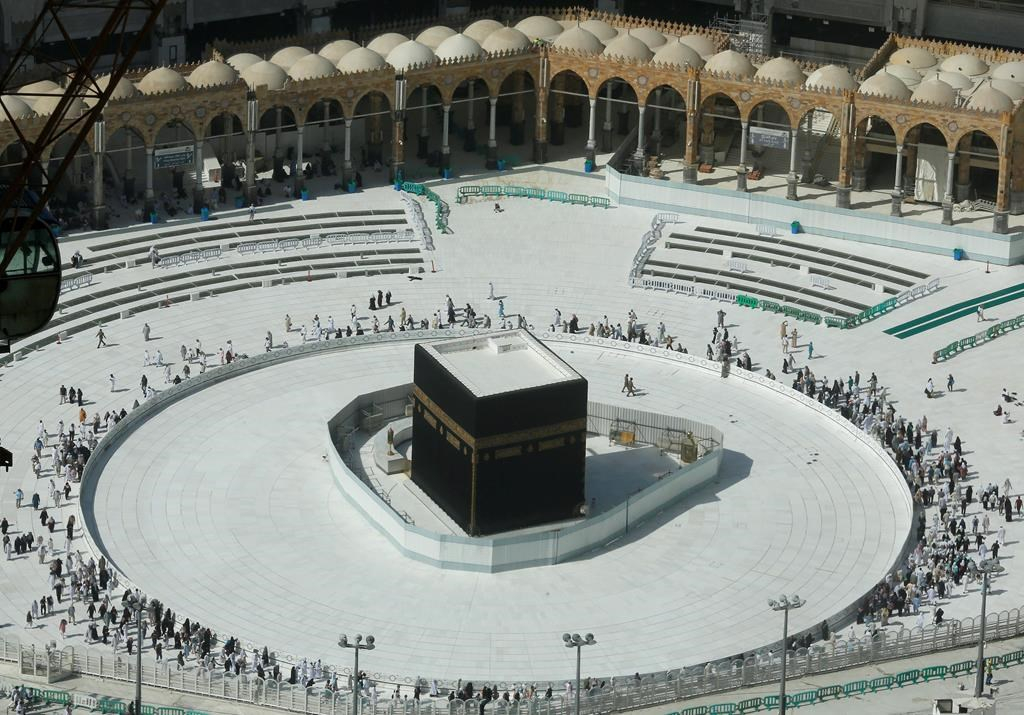 Muslims circumambulate the Kaaba, the cubic building at the Grand Mosque, in the Muslim holy city of Mecca, Saudi Arabia on March 7, 2020. File photo by The Associated Press/Amr Nabil
Previous story
Next story

It took Muhammad Siddique five years to save up for a pilgrimage to Mecca, but now the COVID-19 pandemic has left his plans up in the air.

The pilgrimage — a process known as Hajj — is considered one of the most important obligations for a Muslim to fulfill. Every follower of the religion who has the money and the health to complete the journey to Mecca is required to do it once in their lifetime during the 12th month of the Islamic lunar calendar. This year, that falls during July and August.

But after Saudi Arabia closed off travel to the holy city for another pilgrimage called Umrah last month, many potential travellers are concerned that Hajj could be affected too. The unprecedented move to cancel Hajj wasn't even taken during the 1918 flu epidemic that killed tens of millions worldwide.

"If it's spreading more, it's better to lose money and not go for Hajj this year," said Siddique, who said he's paid $6,000 worth of non-refundable deposits for himself and two family members.

"We have to take preventative measures," he said, adding that he'd cancel the trip if COVID-19 starts infecting larger numbers of people in Saudi Arabia.

The Saudi government has already limited travel into the country after the novel coronavirus started spreading throughout the Middle East. On Sunday, the country announced the closure of mosques and announced that Friday prayers would be called off.

Travellers from Canada have cause for concern as well: the federal government urged Canadians to avoid all non-essential travel this weekend and told Canadians abroad to head back as soon as possible to avoid the closure of international travel routes.

But Hajj is not a cheap undertaking. Prices listed online for the multi-week pilgrimage can range from $10,000 to $15,000 per person, with more expensive luxury packages also available. Many people spend years saving for the trip.

Abdalla Ali, senior community advisor at the Islamic Society of North America, said a move to cancel Hajj would be unprecedented. But he believes that it could happen based on the cautionary measures the government is already taking.

"It's never happened before, but this year it's likely because they already closed all the universities, schools and major events," said Ali.

He also said while travellers may lose out on deposit payments, the tour operators based in Canada could take the hardest financial hit if Hajj is cancelled by the government.

"There are so many things that will be a loss for them," said Ali, noting that companies could sink even deeper in the red if the exchange rate between the Canadian dollar and Saudi riyal gets worse.

"I have a feeling some of them will go bankrupt," he said.

Tour operators who organize Hajj trips for Canadians say that they're already receiving voluntary cancellations every day for both Umrah and Hajj trips.

Mahad Warsame, a director at Sahal Umrah and Hajj, estimates that 150 people have cancelled their pilgrimages since the coronavirus outbreak began.

"It's a catastrophe, it's been very tough, we've actually had to lay a person off," said Warsame.

"It's a scary time we're all living in, it's not just about business, it's about lives being lost."

But Warsame says he's still optimistic that Hajj will not be cancelled this year.

"This is similar to SARS, and the Saudi government handled it very well in regards to the safety of people," he said, adding that the pilgrimage still took place during that outbreak in the 2000s.

With several months to go before Hajj takes place, Ali said around 500 people at his mosque's tour group are hoping that the situation will improve in the coming weeks.

"I personally think (Saudi Arabia) will do everything in their capacity not to cancel the Hajj," he said.