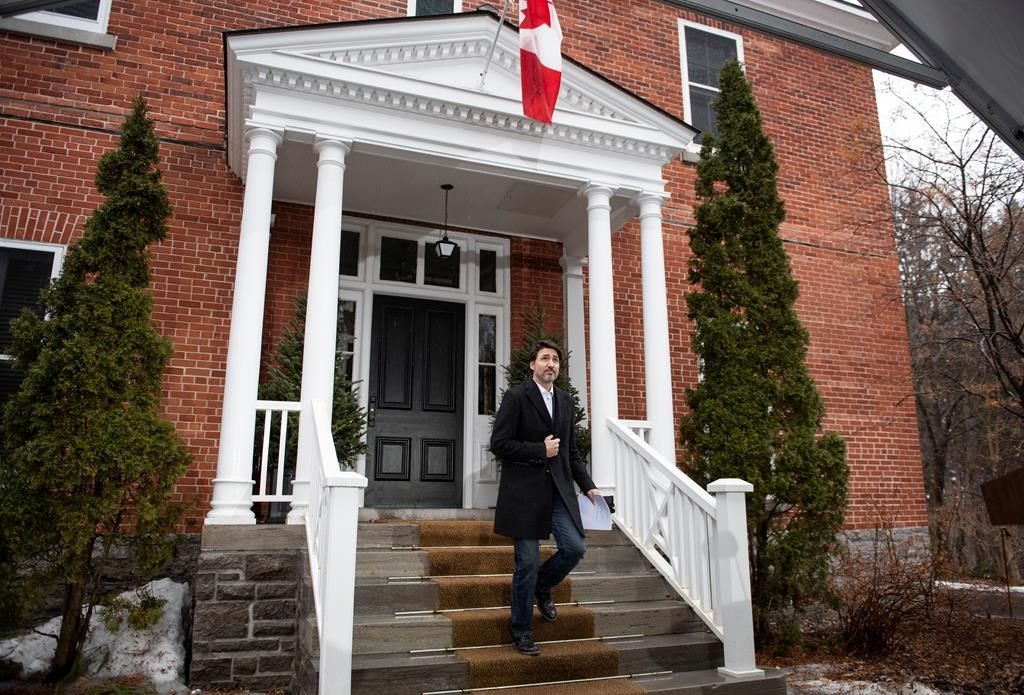 Prime Minister Justin Trudeau looks up at the falling rain as he arrives for his daily press conference on COVID-19 in front of his residence at Rideau Cottage, on the grounds of Rideau Hall in Ottawa, on Mar. 29, 2020. Photo by The Canadian Press/Justin
Previous story
Next story

The federal government signalled Sunday it is shifting the focus of its COVID-19 aid towards Canada's most vulnerable as public health experts expressed cautious optimism the nation's physical distancing experiment could be working.

Most Canadians are entering the third week of a COVID-19 slowdown that has them keeping their distance from all but immediate family members, and some provinces are starting to report a slowdown in the rate of new infections.

On Friday British Columbia said its early modelling was suggesting social distancing had cut the spread of the novel coronavirus in half. On Sunday, Quebec Premier Francois Legault said the daily increase in positive cases "seems to be stabilizing."

Dr. Theresa Tam, Canada's chief public health officer, said Sunday it's still too early to know what the impact of closing schools and offices and restricting retail services has been on the virus's spread.

"But next week will be very, very important, for me anyways, in terms of looking at those trends," she said.

A little more than six per cent of cases so far have required hospitalization, and three per cent are in critical condition. About one-tenth of the hospitalizations occurred in people under the age of 40, a statistic Tam said she cites so people understand that younger Canadians can get very ill from COVID-19.

She urged Canadians not to let up their efforts to physically distance themselves from others, with a particular message for those about to celebrate some of the biggest religious observances on the calendar, including Passover, Easter and Ramadan. Tam said all will have to be adapted for the "two-metre bubble" of social distancing, and she is asking religious leaders for help to make sure that happens.

Trudeau said Sunday the crisis is taking a toll on all Canadians but noted that staying home is particularly hard for Canadians who were already struggling — and it's impossible for those who don't have a safe home to go to.

"Tough times fall first and hardest on the most vulnerable in our communities," Trudeau said, at his regular Sunday briefing outside his Ottawa home, where he remains in self-isolation.

Ottawa is adding a $7.5 million contribution to Kids Help Phone so the national charity can hire more counsellors and seek out additional volunteers to assist more young people calling and texting for support.

Another $9 million was announced for United Way Canada to deliver services to seniors who need practical help with such everyday chores as grocery shopping, filling their prescriptions or getting meals delivered.

United Way and Kids Help Phone were among a coalition of Canadian charities that asked for help last week, warning they were going to collapse as COVID-19 wreaked economic havoc on their donors and volunteers.

Much like private sector businesses, charities report having to lay off employees as grant programs are cancelled and donations dry up. The group says there are more than 1.4 million Canadians employed in the charitable sector, which accounts for eight per cent of Canada's economic activity.

Trudeau said there will be additional help for charities announced in the coming days, but he also appealed to Canadians who are able to donate money or time.

"Not only are organizations in the charitable sector and the non-profit sector doing incredibly important work during difficult times, they're also in many cases seeing their donations dry up and are very worried about their capacity to continue to do the work they're doing," he said.

The government already announced $157.5 million for homeless shelters and up to $50 million for women's shelters as part of their massive federal aid package made public March 18, mainly to help the organizations buy protective gear for workers and find ways to keep clients isolated as necessary.

While details of the funding are expected this week, Families Minister Ahmed Hussen said Sunday $15 million in emergency funding has already gone out and is having an impact, allowing shelters to get hotel rooms for clients who need to be quarantined or isolated and to buy emergency supplies to protect frontline staff.

Trudeau said Sunday he intends to stay in isolation at his home for almost two more weeks even though his wife, Sophie Gregoire Trudeau, has fully recovered from COVID-19.

Gregoire Trudeau was diagnosed March 13 after a trip to England, and was quarantined at the couple's home until her doctor and Ottawa Public Health gave her the medical all-clear a couple of days ago. She is now at the prime minister's cottage residence in Quebec with their three children, while Trudeau stays at Rideau Cottage in Ottawa to continue to work.

He said they were careful to stay apart during his wife's quarantine, but because he was sharing a home with someone who had COVID-19 he will stay isolated to follow the best advice of medical staff.

"I have to continue in isolation in order to be sure that we're following all the protocols and the recommendations by Health Canada," he said.

Neither he nor their children, Xavier, 12, Ella-Grace, 11, and Hadrien, 6, have shown symptoms of the illness.

Trudeau was the first major world leader to go into isolation because of COVID-19, and his role as both the head of a G7 nation and the only parent at home able to care for the couple's three children garnered him headlines around the world.