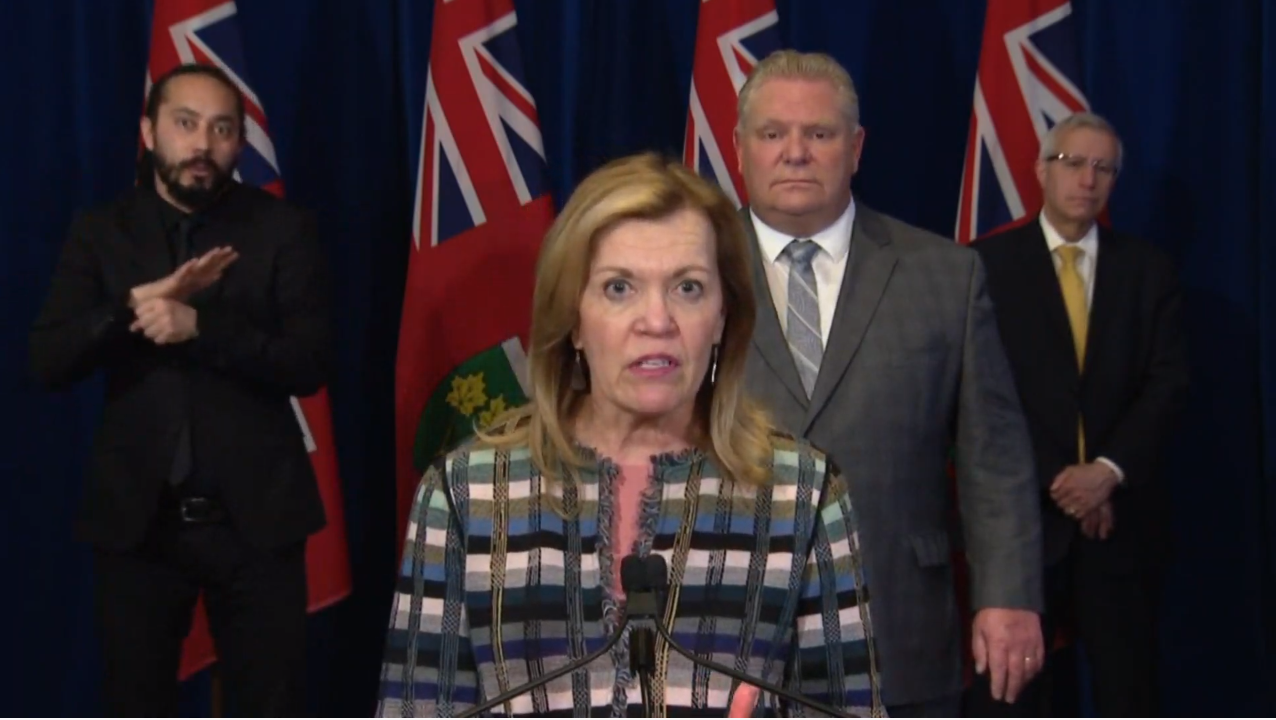 Ontario’s public health officials say they plan to release projections early next week showing how much COVID-19 cases in the province could surge.

While officials in the U.S. have released their expectations of how bad the pandemic could be, their Canadian counterparts have been criticized for not sharing the same information. Ontario’s Chief Medical Officer of Health, Dr. David Williams, said Wednesday that projections are still fluctuating as current data comes in.

“It can confuse people if you jump between numbers,” Dr. Williams said. “We don’t want to confuse the public, but we do want to plan.”

Earlier in the day, Premier Doug Ford and Health Minister Christine Elliott declined to say, when questioned by reporters, what models are showing ⁠— the numbers could “change drastically” and “create panic,” Ford said at his daily press conference, with Elliott and Economic Development Minister Vic Fedeli by his side.

“We can’t predict right now what’s going to happen because the model is just that, a model,” Elliott said. “We are dealing with what’s happening in the real world.”

Part of the reason for the delay in releasing projections, Dr. Williams said, is Ontario’s long-running backlog of people waiting for the results of their COVID-19 tests.

Though that clog has mostly cleared ⁠from its peak of nearly 11,000 last week, there were still 3,135 people waiting for results as of Wednesday morning. Last week, Ontario officials said the logjam would be cleared by early this week as the province expanded its testing capacity.

Working through the backlog has allowed the province to identify more cases, which has been partly to blame for the large jumps in case numbers Ontario has seen this week. But those cases are “historic” and can date back as far as a week, Elliott said Wednesday; as the backlog is cleared completely, officials will be better able to see how many new infections are happening now.

Ontario reported 426 new cases of COVID-19 Wednesday, a nearly 22 per cent increase. There are currently 2,392 cases total, and 37 people have died from the novel coronavirus, according to provincial totals.

‘We have dark days ahead’

At this point, there’s “very little” separating Ontario from countries such as Italy that have been hit hardest by the COVID-19 pandemic, Ford said.

"We have dark days ahead," Ontario Premier Doug Ford said Wednesday. "We know (a surge in cases is) coming over the next few weeks.” #COVID19ON

“We have dark days ahead,” he said. “We know (a surge in cases is) coming over the next few weeks… I can’t give you an exact time, but we’re going to face it.”

On Wednesday, the premier announced a $50-million fund aimed at helping Ontario manufacturers retool their equipment to make protective medical equipment, moves some companies have made already. Though Ford said vital supplies are being delivered “literally every single day,” he also urged manufacturers in the province to join the fight against COVID-19 and help make ventilators and protective equipment.

“Your province needs you,” he said.

Ford also said his Progressive Conservative government is considering slimming down its list of essential businesses that are allowed to operate during the pandemic. This week, the government took steps to close all outdoor recreational areas in the province, and require anyone breaching emergency rules set during the pandemic to identify themselves; violating either order comes with steep fines.

On Monday, Ford said the province is at risk of running out of medical equipment in the next two weeks if it can’t ‘flatten the curve’ and delay the number of infections from rising. He also pleaded again with the public to stay home as much as possible and following physical distancing guidelines.

“The hard truth is, the more time we have, the more lives we can save," he said.

neo liberal verging on libertarian and enablers of corporate welfare bums one and all in doug and the destroyers cabinet. They are taking advice from the construction industry clearly --still allowing home renos mostly high end stuff in the rich boroughs around To --to continue but don't let poor folks take a walk in the park!!
our health minister is yet to be photographed not looking like the angel of death who just sucked a bucket of lemons. She's always lurking behind doug and thinking bitter thoughts about how she should have been chosen as the destroyer in chief for the province.
Cuts to public service in the service of tax cuts for corporations --specifically private american health firms -- is her deeply cherished goal. Wonder how that's going to go down after this pandemic shows up all the benefits to a robust well funded public health system with redundancies built in??