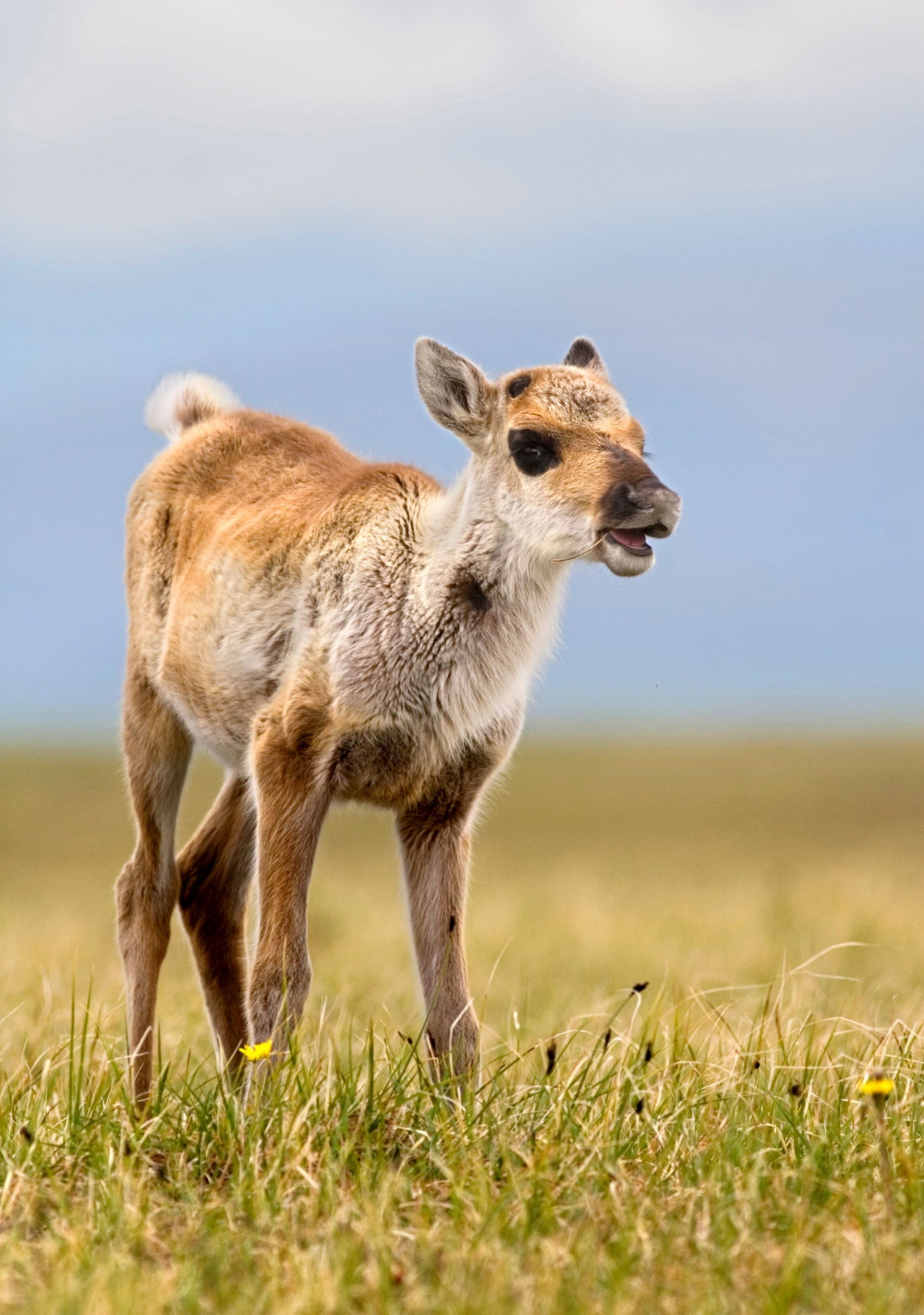 A caribou calf grazes on the Coastal Plain of the Arctic National Wildlife Refuge. Photograph by Malkolm Boothroyd
Previous story
Next story

Author's note: The meetings featured in this piece took place in December 2019, before most of the world was aware of COVID-19. So much has changed in a few short months, but the U.S. government's determination to drill in the calving grounds of the Porcupine caribou herd has not. Even in this crisis, I believe it's important to hold on to our love of the wild places we care about, and maintain our conviction to protect them.

“This building is made of gold,” one of the bankers says. He nods at the windows that frame the boardroom. “Back when this tower was built, it was cheaper to tint glass with gold leaf than with artificial colours.” I choose a seat on the side of the boardroom table that faces the Toronto skyline. Most of the skyscrapers stand at eye level, except for the CN Tower, which soars above every other landmark. Curtains of snow drift in from Lake Ontario.

Poinsettia leaves and gold foil reflect off the lacquered tabletop. An abstract painting fills up most of one of the walls at the back of the room. I’ve never seen the inside of a Bay Street bank, let alone an executive conference room. We’re here because the U.S. government is attempting to authorize oil drilling in the Arctic National Wildlife Refuge. In our quest to prevent drilling, we’re searching for unusual allies: Canada’s wealthiest banks.

“I hope you aren’t finding Toronto too cold,” another banker says, taking a seat and looking down the table.

Geraldine hails from Tsiigehtchic in the Northwest Territories, on the banks of the Mackenzie River. She’s here representing the Gwich’in Tribal Council and the Gwich’in Youth Council. We’re also joined by Councillor Cheryl Charlie and Liz Staples, with the Vuntut Gwitchin First Nation of Old Crow, Yukon. Chris Rider and I round out the delegation. We work for the Yukon chapter of the Canadian Parks and Wilderness Society.

The bankers listen as we talk about the great congregations of caribou that converge on the coastal plain of the Arctic refuge to give birth. The refuge is called Iizhik Gwats'an Gwandaii Goodlit in the language of the Gwich’in, The Sacred Place Where Life Begins. Oil drilling would strike the heart of the Porcupine caribou herd’s calving grounds, where they are most vulnerable.

Even though the Arctic refuge is in Alaska, the impacts of oil drilling would hit Canada hard. The Porcupine caribou herd is fundamental to the culture and subsistence ways of life of the Gwich’in in communities in the Yukon and Northwest Territories — where a bag of apples can be $17 and two litres of milk costs $8. The fate of the Gwich’in is tied to the fate of the caribou.

The Arctic refuge is in grave peril. In 2017, American legislators used unrelated tax legislation as a Trojan horse to legalize drilling in the refuge. Now, the U.S. government is racing to complete an environmental review. It hopes to sell leases in the coming months.

But an energetic campaign is pushing back. One strategy focuses on corporations, and it’s paying dividends.

The Arctic refuge is in grave peril. In 2017, American legislators used unrelated tax legislation as a Trojan horse to legalize drilling in the refuge.

On the eve of our arrival in Toronto, Goldman Sachs announced it wouldn’t provide new money for fossil fuel developments in the Arctic — and made specific mention of the Arctic refuge. More than a dozen banks from around the world have implemented similar policies, including Barclays, National Australian Bank and BNP Paribas. The positions these banks have taken are critical, because of the shifting landscapes of Alaskan oil production.

Some of the world’s wealthiest oil companies are pulling out of the state. In 2015, Shell abandoned plans for offshore drilling in the Chukchi Sea, at a $7-billion loss. In 2019, British Petroleum sold the entirety of its Alaska operations. These moves increasingly leave Alaskan oil production in the hands of small players most people have never heard of — companies such as Hilcorp, Oil Search and 88 Energy.

Drilling in the Arctic is costly enough, let alone in places with no existing infrastructure, like the Arctic National Wildlife Refuge. The miniature oil companies left in Alaska likely couldn’t afford to drill in the refuge without outside investment. The pool of finances available to these companies could drain if enough banks come out against drilling in the Arctic refuge.

The meeting wraps up. We take the elevator back to the atrium, then an escalator down into the labyrinth of shops and food courts beneath the streets of Toronto. Liz checks a map, then leads us up to the lobby of another bank tower. Our next meeting is in 10 minutes. By the time we head home, we’ll have met with four of Canada’s five largest banks.

Canadian banks are noticeably absent from the list of banks that oppose drilling in the calving grounds of the Porcupine caribou herd. Any bank that finances drilling in the Arctic refuge would be complicit in the destruction of one of the world’s great wild places, the worsening of the climate emergency and the erosion of the Gwich’in way of life.

Enacting a policy against Arctic refuge drilling would be an easy win for Canada’s banks. There’s immense support for protecting the Arctic refuge across Canada. Also, banks wouldn’t have to extricate themselves from prior investments, because no companies are operating there yet.

We pass through a revolving door and onto Bay Street. Icy winds swirl between the highrises. I wasn’t prepared for it to be this chilly here. Toronto has more in common with the Far North than I’d thought. It’s fitting, because these places are intertwined. The decisions made in the banking towers above us carry huge importance: for the Gwich’in, for the climate crisis and for newborn caribou taking their first steps on the Arctic refuge tundra.

Malkolm Boothroyd is the campaigns co-ordinator at the Yukon chapter of the Canadian Parks and Wilderness Society.

An easy win for Canadian

An easy win for Canadian Banks? That's probably NOT how they see it. What they can forsee is the revenge enacted on them by the American Government and the political saboteurs now filling the oval office and its agencies.

It certainly takes a great deal of spine stiffening to embark on this path with the vindictive corporate titans and their robotic political slaves looming over the financial world and the markets.

However, given the current distracting crisis and the slow accumulation of global concern over the state of the planet, Canadian Bankers may have more reasons to ponder than they thought in December. What they may, in fact, be more concerned about is the loss of dreams of incalculable wealth. On the other hand with oil prices melting like April snow - perhaps those dreams are turning into mythical ground mist?