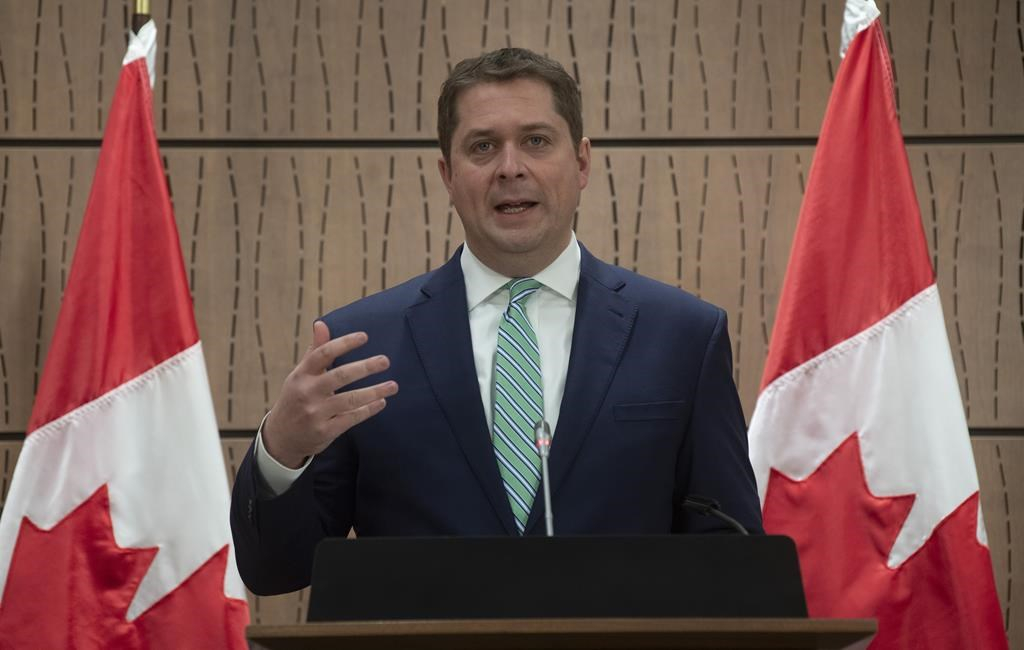 Leader of the Opposition Andrew Scheer speaks during a news conference on the COVID-19 virus in Ottawa, on Tuesday, March 24, 2020. File photo by The Canadian Press/Adrian Wyld
Previous story

Andrew Scheer billed the Conservative party for his kids' private Catholic school, private security, an extra housekeeper, his minivan and clothes for his family, a party review of the outgoing leader's spending has concluded.

The audit found his expenses — including $18,000 per year in private school tuition fees — were properly recorded by the Conservative party but not shared in an itemized way with the powerful group overseeing the party's finances, known as the Conservative Fund.

Party spokesman Cory Hann confirmed the audit was complete and had been reviewed by the party's national council.

"The party's audit found no red flags in the party's accounting system and noted that all the expenses that were paid out were documented fully," Hann said in an email Thursday.

He also said the Conservative Fund considers the matter closed.

The audit had been ordered last fall.

Questions about how Scheer had been using party money began to surface at the same time as senior Conservatives were publicly calling for him to resign. They cited his failure to knock the Liberals out of power in the 2019 campaign and his perceived inability to do so in the next campaign.

Just as Scheer was announcing he'd step aside as soon as his replacement was chosen, it became public that party money had been used to pay for his children's private school tuition.

While the party immediately said the move was above board, in the background a battle was raging between Scheer and the fund. Former Conservative prime minister Stephen Harper was on the board at the time.

The party allocates a budget to the leader meant to cover political expenses that wouldn't be paid by the House of Commons but are part of the job, and also to potentially defray some of the leader's general expenses.

But the specifics of Scheer's expenses were not known by the fund and once details of the tuition payments were leaked, Harper and others were furious.

Harper's own children went to public school. There are also publicly funded Catholic schools in Ottawa.

The ensuing fracas saw the fund push the party's executive director — who had authorized the spending — out of his job and demand a line-by-line review.

As leader of the Opposition, Scheer made about $264,000 a year. That was before the automatic salary increase that took effect Wednesday, but he is promising to donate the difference to charity. He also receives a $2,000 car allowance.

He and his family live rent-free in the official Opposition leader's residence, Stornoway, although they continue to maintain a home in Regina.

The money for schooling covered the difference between the cost of a private Catholic school in Regina and in Ottawa, amounting to $18,000 in total a year for Scheer's four school-age kids.

Hann confirmed the Scheers expensed clothing, a housekeeper and money for school to the party. Other details, including the minivan, security and the amount spent on tuition came from a senior Conservative source familiar with the audit who was granted anonymity by The Canadian Press because they were not authorized to discuss it publicly.

Hann said the clothing the Scheer family expensed was used for campaign appearances and other party events.

The minivan made appearances in some of the party's advertising and was often cited by Scheer as proof of his "average Canadian" background compared to Prime Minister Justin Trudeau. It was used mainly to get the family around Ottawa.

A spokesperson for Scheer said he had nothing to add to the disclosure of the details of the audit.

Scheer has refused to discuss it in the past, saying only that it was an internal party matter and details would be made public in due course.

The review took place as part of the party's overall accounting of its 2019 election campaign spending. Part of that was determining why Scheer's office expenses came in at $500,000 over their normal budget.

The review concluded that his office had taken on pre-election expenses that should have been run through the party itself.

The leadership contest to replace Scheer was to conclude June 27, but is now on hold in the midst of the COVID-19 pandemic.

Though the spending controversy had largely faded from public view, it still simmered in the background for Conservatives.

The money Scheer used came directly from donors, many of whom receive a tax credit.

Fundraisers were told repeatedly that unless the party was more transparent with how it spent its money, donors wouldn't give a dime.

The party is currently mired in debate about whether and how they can fundraise in the midst of the COVID-19 pandemic, and getting the Scheer expenses issue off the table was seen as one less barrier to raising funds.

And this is the guy who is

And this is the guy who is demanding transparency from the Liberals as they try to manage the toughest crisis in the history of Canada.