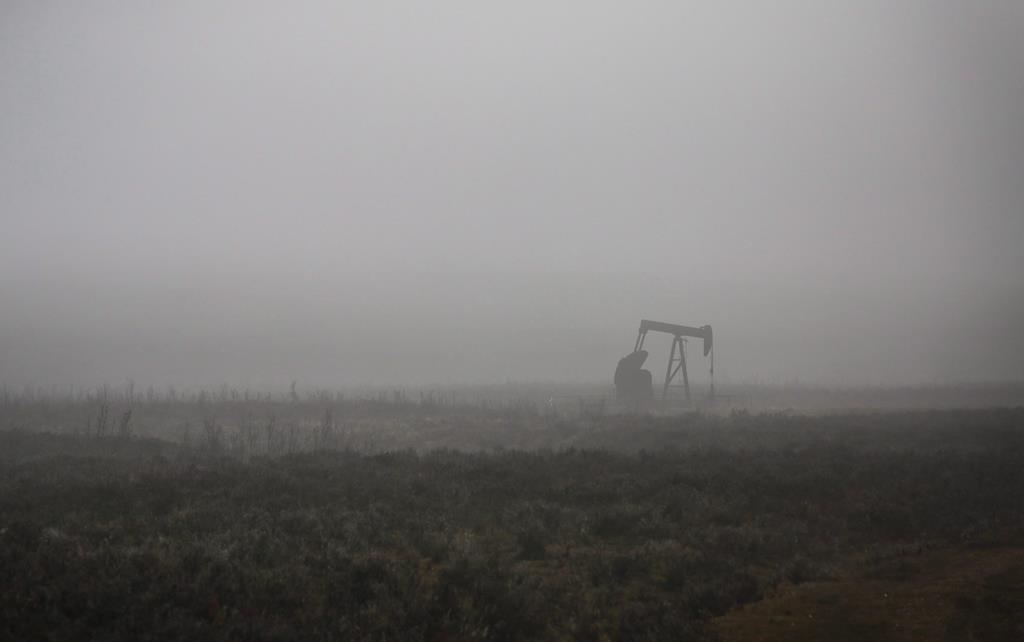 A pumpjack works at a well head on an oil and gas installation on a foggy day near Cremona, Alta., on Saturday, Oct. 29, 2016. File photo by The Canadian Press/Jeff McIntosh
Previous story

Canada's oil producers could only sit and watch as the price of their product plummeted last month to less than what it costs to buy a litre of soda, hit by the double whammy of a COVID-19-induced drop in global demand and a production war between Russia and Saudi Arabia that flooded the market with more oil it didn't need.

Prime Minister Justin Trudeau said Friday his government is looking for a way to help. But it is also clear any aid package is being influenced by the push-pull the Liberals have long felt between one of Canada's most influential economic sectors and an environment movement which sees this as Canada's opportunity to move away from fossil fuels once and for all.

Keith Stewart, an energy strategist with Greenpeace Canada, said a delay in the package is a good thing, because it would be a lot easier and faster to pump out a bailout of loans and aid to companies than it would be to find innovative ways to fund workers through a transition to greener pastures.

Greenpeace is among a number of national environment organizations demanding no cash be spent to help oil companies.

"Doing it right is more complicated than doing it fast," he said.

He is hopeful any direct aid to companies will be tied to their willingness to show business plans in line with Canada's climate targets. Anything else should help workers who need to know they can pay their mortgages and put food on the table while they retrain for new jobs in clean energy or environmental remediation.

An investment to clean up Alberta's orphan wells was promised by Morneau on March 18, and was expected in the federal budget which has now been delayed indefinitely due to the COVID-19 crisis.

Tim McMillan, president of the Canadian Association of Petroleum Producers, said it is "frustrating" that Ottawa reached out to talk as soon as the demand drop and the Russia-Saudi Arabia spat began to hurt. But right now it's all still just talk.

"I think it is unparalleled in history to see demand drop like this," he said.

"The urgency is apparent. We're seeing the damage being done to our economy."

McMillan said regardless of global markets, there is no doubt oil and gas is an essential service, producing petroleum-based chemicals used in plastics for health care equipment and natural gas that is keeping the heat on and keeping electricity plants pumping out power.

Global oil demand fell by one-third in March, as worldwide air travel all but stopped, manufacturing plants went on hiatus and workers around the globe heeded requests — and often orders — to stay at home. At the same time Russia and Saudi Arabia could not agree on cuts to oil production, flooding markets with oil and further depressing prices.

In Western Canada, prices fell below US$4 a barrel at one point last week.

The International Energy Agency predicted Friday the oil market collapse could cost 50 million jobs internationally. In Canada, companies are already laying off workers and cutting production because there is no profit to be made pumping out a barrel of oil that costs less than an expensive coffee.

Prices jumped a bit Friday, with news that an online meeting of oil producing countries is set for Monday in a bid to overcome the production war. It does not appear that Canada will be part of that meeting. Trudeau was asked directly Friday if Canada would be participating and dodged the question.

Conservative energy critic Shannon Stubbs said she too wants to see the investments focus on people, but in a way that bridges them and their companies to get back to producing oil. Stubbs said every day constituents in her Alberta riding are calling terrified for their future. Jobs are disappearing and the spinoff impact across her riding's economy is profound.

Trudeau would not tip his hand on any timing or content of the aid package in the works, though he said it was part of the conversation he had with premiers Thursday during a first ministers' teleconference call. Trudeau said some of the already announced COVID-19 aid is open to oil companies and workers too.