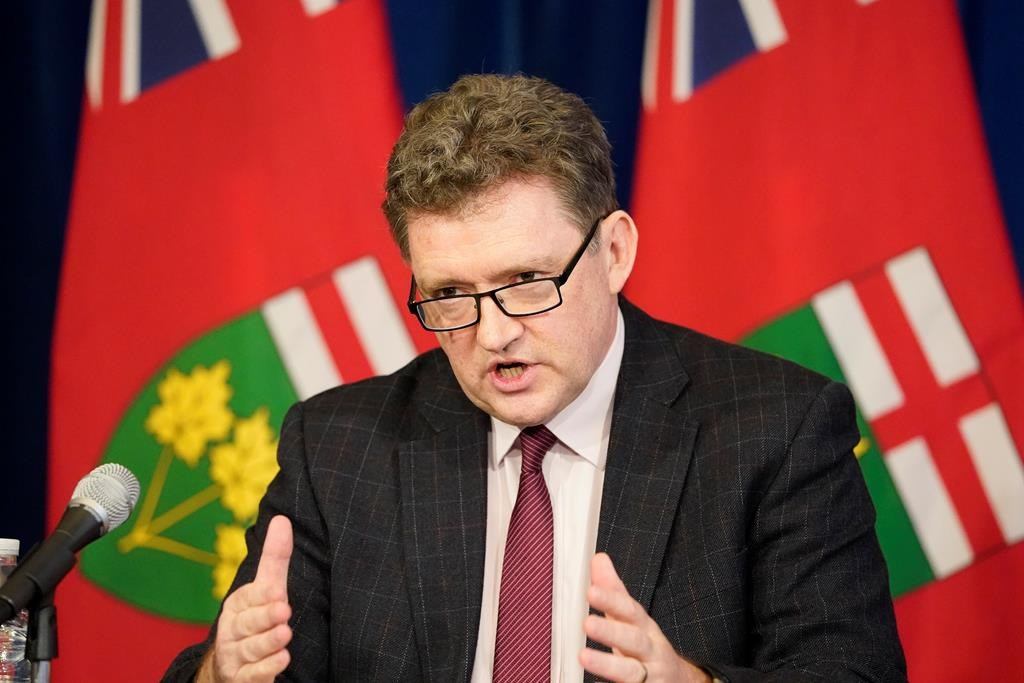 The sacrifices Ontarians have made recently have saved thousands from the ravages of the COVID-19 pandemic, Premier Doug Ford said Friday, even as he announced more stringent measures in a bid to avert what new projections suggest could be a dire outcome.

Moments after public health officials spelled out the prospective toll the novel coronavirus could take on the province's population, including thousands of potential deaths, Ford moved to shutter an even larger swath of the Ontario economy.

The move was among the recommendations made by a group of high-ranking doctors, who said failure to adopt stricter public health measures could lead to an estimated 1,600 fatalities by the end of April and as many as 15,000 over the full course of the outbreak.

Ford said the decision to drastically pare down the list of essential services allowed to operate was difficult but necessary in light of the data showing the effectiveness of physical distancing in curbing the spread of COVID-19.

"The numbers clearly show that we collectively have saved thousands of lives," Ford said. "But we also know that we can't stop now."

The new business closures, which take effect on Saturday at 11:59 p.m. and will be in effect for at least 14 days, include all industrial construction sites except for those on projects considered critical.

Cannabis shops, which had initially been deemed an essential business, have been cut from the revised list with only the province's online sales portal remaining open.

The projections that paved the way for the latest wave of closures painted a stark picture of the effect COVID-19 will have on the provincial health-care system, but also suggested the outcome would have been much worse without the actions taken to date.

They showed that up to 100,000 people in the province might have died over the full course of the pandemic without the widespread closures of schools and businesses the government enacted last month.

"If we do everything that we can think of — everything that already has been done stays in place, all of the other measures that are being considered put in place — then I think we could reduce the death toll in Ontario to somewhere between 3,000 and 15,000," he said.

Donnelly and other officials offered suggestions for such measures. In additions to the steps Ford announced Friday, they advised imposing entry restrictions on some communities including First Nations, providing more protection for seniors and tightening guidance on physical distancing.

Donnelly said the projections, which are far from set in stone, span the full course of the outbreak. He said that could last as long as 18 months to two years if second and third waves of the virus are taken into account.

"Where we end up depends on all of us," he said.

Ford, who ordered the release of the bleak forecasts on the grounds that Ontario residents had the right to as much information as possible, said the data make the need for aggressive physical distancing even more evident.

"We all want safe jobsites," said Joe Vaccaro, chief executive officer of the Ontario Home Builders' Association. "Let's keep each other safe. We are all in this together."

Meanwhile, the number of COVID-19 cases and fatalities in Ontario continued their upward trajectory on Friday. The province reported 462 new cases, bringing the total number of infections to 3,255. Deaths climbed by 14 for a total of 67 provincewide.

Those figures did not include four new deaths at a central Ontario nursing home, the scene of one of the largest outbreaks in the country.

Twenty of the roughly 65 residents of Pinecrest Nursing Home in Bobcaygeon, Ont., have died in recent weeks. At least 24 staff members at the facility have also tested positive for COVID-19.

The home announced it had taken additional steps on Friday, including isolating healthy residents from sick ones and ramping up staffing levels and cleaning protocols.

It's interesting that we have

It's interesting that we have a right to some information, but not, FI, messaging in line with recent research because presumably, that would highlight the reasons why their approaches have been as ineffective as they've been to date.
At all levels, too little, too slow and too late.
Masks can't help (though apparently they actually do) because they didn't bother to secure any supply at all until weeks after hospitals were crying out for enough for front line workers.
The "screening" still amounts to "have you travelled abroad in the past 15 days or been in close contact with someone who has ... and if yes, then and only then if you have a fever," will we test you (unless you're already having difficulty breathing) ... and if the screening is all negative, then go ahead and work in the old folks home. "Steel bands around our precious seniors," indeed: it feels more like making sure none of them find an escape from their death trap ... steel bands generally hold things in, not out.
The city has doubled down on inhalation of anything but being coughed-on-in-the-face, with now a statement that the *only* means of transmission are from that and touching surfaces on which fomites have dropped or been dislodged from hands.
On the one hand, there is a claim that very little illness has originated with repatriated Canadians; on the other, only a small proportion is from community spread. You can't have it all ways at once.
I suspect that they'll now come out in 3 or 4 weeks with a giant hurrah about how great things are working (still: not again, despite that we're told we'll run out of respirators so all our valued seniors (I'm one) need to lock themselves in now for 6 months: no sidewalk walking for them ... because considerations for triage out of respirator support include age-by-numbers. That's just nuts. There are plenty of healthy 75 yos, hiking, running, and taking no meds whatsoever, while there are equally plenty of lazy, fat, cigarette-smoking and beer-guzzling 30- or 40-somethings on insulin and heart meds.
And on top of that, given the immaturity evidenced here and there, and the continual flip-flopping between on the one hand what was important yesterday, compared to today, and what will again be important tomorrow ... not only is it dizzying and lacking credibility, but any of the choices so far seem to have been missing a lot of what should be or should have been obvious (or both).