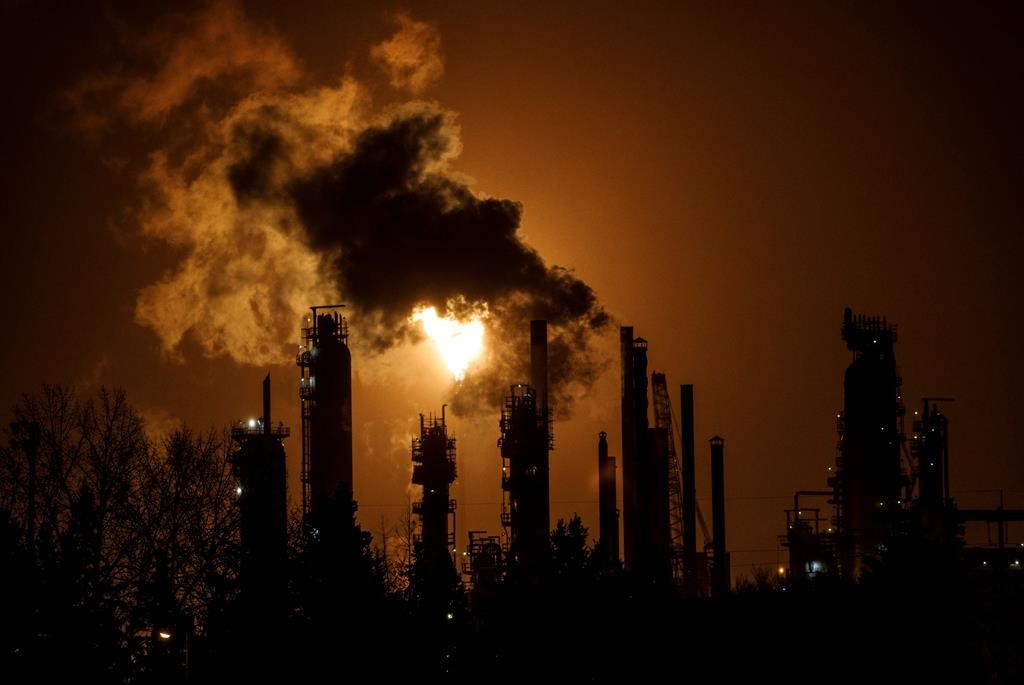 A flare stack lights the sky along refinery row in Edmonton Alta, on Friday, December 28, 2018. File photo by The Canadian Press/Jason Franson
Previous story
Next story

The end of the COVID-19 pandemic may be a long way off, but analysts are already looking ahead to how Canada could hasten its recovery and position itself for a low-carbon economy.

"The main thing we need to be doing right now is protecting Canadians' health and well-being," said Josha MacNab of the Pembina Institute.

"Within that context, we're starting to turn our minds to what does economic recovery look like."

Downturns like the one being caused by the global pandemic routinely reduce carbon dioxide emissions. In the past, they've always recovered as economies rebuild.

This time, many are asking how the economy can be restored without greenhouse gases tagging along. Open letters on the issue have already been signed by hundreds of thousands of Canadians, from academics to church groups.

Groups such as the World Resources Institute in the United States are calling for clean energy tax credits, programs to increase the energy efficiency of public buildings and a switch from diesel to electric transit buses. It notes similar measures after the 2009 crash saw 900,000 jobs supported.

Pembina has its own list: funding and training for jobs more resilient to market swings, incentives for switching to electricity, support for industries that produce lower-carbon goods.

"We see this as a once-in-a-generation opportunity to make a down payment on a resilient economy and a healthier future," MacNab said.

Once the immediate crisis has passed, the Canadian Institute for Climate Choices wants any upcoming stimulus package to focus on making the country more resilient to climate-related shocks such as wildfires or floods.

"These are what we perceived as (remote) risks in the past," said the group's economist, Dave Sawyer. "Suddenly, they're happening all the time."

The long-term response to COVID-19 could be a chance to do things the Canadian economy will have to do anyway, he said, such as retrain workers from high-carbon industries.

"We know that some industries under this low-carbon future will shed workers," Sawyer said.

"Where do these workers go? There has been a growing trend to think about transitions for workers."

Not everyone thinks a post-pandemic green stimulus is appropriate.

He suggests the need for relief is going to be so great that governments will at first simply try to restore normalcy.

"Governments are going to pour the money in, short-term, to where workers are already skilled and to regions where they're already working," he said. "So it's going to be in to fossil fuel-endowed areas."

The real challenge, Jaccard said, will be to not let COVID-19 derail policies already planned or in place.

"It isn't government spending that will lead to a decarbonized economy. It's policies."

Groups such as the Canadian Taxpayers' Federation and the federal Conservatives have already called for the planned increase in the federal carbon tax to be delayed. The increase, to $30 per tonne, has gone ahead.

Still, Keith Stewart of Greenpeace said that once the immediate dangers of the novel coronavirus have passed, the upset it will leave behind is a chance for a reset.

"It's a shock to the system that makes things that once seemed natural and inevitable seem unnatural and avoidable."

Stewart said any money that does go to companies must be accompanied by promises of change — much as car manufacturers promised fuel efficiency improvements in accepting their 2009 bailout.

Once initial needs of public health and well-being are funded, government spending should have an eye to the future, said Stewart.

"That investment could entrench existing systems or it could be an investment in the clean-energy economy."