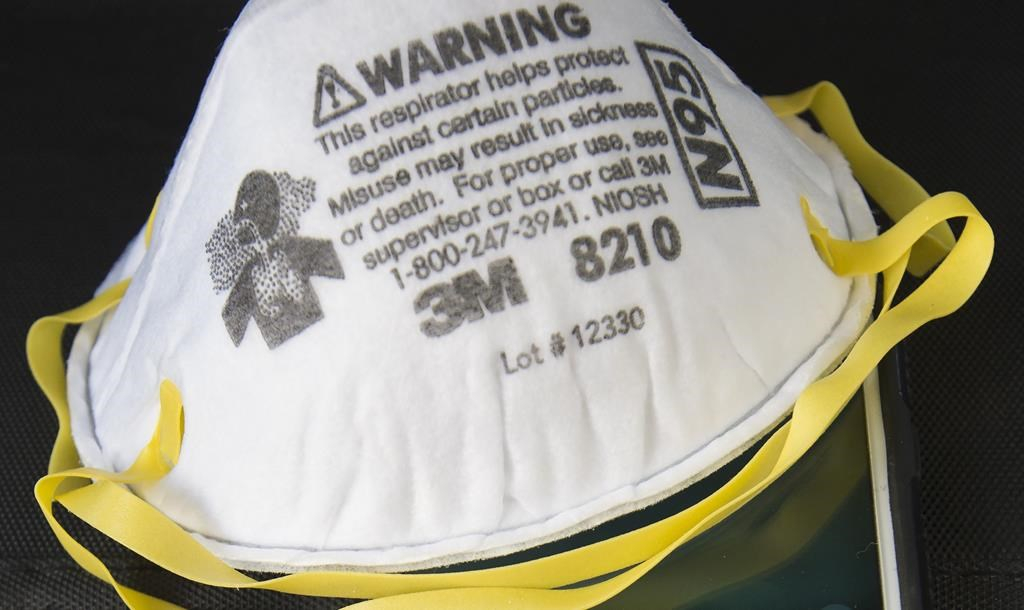 An N-95 mask is seen in Toronto on Friday, March 27, 2020. File photo by The Canadian Press/Nathan Denette
Previous story
Next story

One of the biggest American manufacturers of protective medical gear went to bat for its Canadian customers Friday as it pushed back against a White House order to stop exporting its surgical-grade face masks — mission-critical armour in the war against COVID-19.

3M is a "critical supplier" of the masks to Canada and Latin America, the company said in a statement, pointing to the "significant humanitarian implications" of denying protective equipment to health-care workers on the front lines of a fight against a global pandemic. Doing so, it added, might elicit a costly hostile response.

"Ceasing all export of respirators produced in the United States would likely cause other countries to retaliate and do the same, as some have already done," the statement said.

"If that were to occur, the net number of respirators being made available to the United States would actually decrease. That is the opposite of what we and the administration, on behalf of the American people, both seek."

Trump, however, appeared unmoved, telling the White House briefing Friday he would be signing an order under the Defense Production Act to prohibit the export of scarce medical supplies "by unscrupulous actors and profiteers." It wasn't immediately clear whether it would apply to 3M, although he did say: "I'm not happy with 3M. Not happy."

"We need these items immediately for domestic use," Trump said. "We have to have them."

Deputy Prime Minister Chrystia Freeland, when pressed on the prospect of retaliatory measures, was reluctant to speculate. But if backed into a corner, she said, the federal government would be "prepared to do whatever it takes to defend the national interest."

Trump, asked about the prospect of retaliatory measures in the face of an export ban, appeared not to understand the question. "We really are very well supplied," he said, before going on at length about the medical provisions the administration has provided to state governments.

Prime Minister Justin Trudeau, by now a veteran of navigating U.S. aggression on the bilateral trade file, tried to strike a diplomatic tone, insisting that Canadian and U.S. emissaries were in ongoing talks to keep goods, services and commerce moving in both directions across a border already closed to non-essential traffic.

In so doing, he relied on a strategy Canada honed during the often-fraught NAFTA talks of 2018: framing U.S. isolationism in terms of the potential consequences for Americans themselves.

"These are things that Americans rely on, and it would be a mistake to create blockages or reduce the amount of back-and-forth trade of essential goods and services, including medical goods, across our border. That is the point we are making very clearly to the American administration right now."

Alberta Premier Jason Kenney, however, didn't hold back his outrage at Trump's decision, recalling the early days of the Second World War.

"It reminds me of what happened in 1939 and 1940 when Canada was part of the fight against global fascism — the United States sat out the first two or three years and actually initially refused to even provide supplies to Canada and the United Kingdom that was leading the fight at the time," Kenney said at a news conference in Edmonton.

"As Canadian, I am insulted by the decision announced today."

The frantic scramble for some of medicine's most basic fixtures — from paper gowns to high-tech ventilators — has provided a terrifying subplot to the mounting COVID-19 caseload and death toll in the U.S., Canada and around the world: more than 1 million cases and nearly 60,000 deaths globally. There are nearly 7,000 deaths in the U.S. alone.

By Friday evening, Canada had reported a total of 12,422 confirmed cases, including 182 deaths.

Mark Warner, an international trade lawyer based in Toronto and a veteran of the Canada-U.S. trade dynamic, said he's concerned that Canada's efforts to stand on principle in its discussions with the United States risk falling on deaf ears if the crisis continues to worsen.

"We're in a fight," Warner said. "There's a limited quantity of this stuff that's available, and we're all fighting for it."

Demand for so-called personal protective equipment — gloves, gowns, face shields and the all-important N95 masks — has been soaring around the world as overtaxed doctors, nurses and hospitals struggle to manage the spike in COVID-19 cases while protecting themselves.

And now that the Centers for Disease Control and others in the health community have started recommending everyone wear some sort of face covering while out in public, the scarcity of medical-grade masks is sure to get even worse.

A study by the World Trade Organization found that in 2019, China, Germany and the U.S. together produced 40 per cent of all exports of personal protective equipment, which includes masks, hand soap, sanitizer and protective goggles — more than $15 billion worth last year in the case of the United States.

The U.S. also holds about 16 per cent of the export market for ventilators and respirators, second only to Singapore at 18 per cent.

3M, based in St. Paul, Minn., is one of the largest U.S. providers of protective medical gear, second only to North Carolina-based conglomerate Honeywell, which has been expanding and retooling facilities across the continent to ramp up its N95 production.

3M says it has already "gone above and beyond" to maximize production of the masks for the U.S. market, and was doing so long before the Defense Production Act was invoked. In an interview Friday with CNBC, president and CEO Mike Roman said any suggestion that the company isn't going all-out to meet American demand "is just not true."

Gayle Smith, an expert in international development who once worked as a special assistant to President Barack Obama and as a senior director on the National Security Council, said she believes the U.S. and the world will soon come to the realization that fighting a global pandemic demands a global response.

"It is simply not possible for any country to declare victory and then revert to business as usual," Smith said in an interview, describing the "congestion" in the medical-supplies market as a temporary condition.

— With files from Mike Blanchfield in Ottawa

Anyone who listened this

Anyone who listened this morning 4/03/20 to Trudeau's address and update re Covid19 and this particular item and later, Deputy PM Freelands response, will know that the government and the provincial counterparts are working with their US counterparts on this very subject. The PM made it very clear that there are over 2000 Canadian medical personnel who cross the border to Michigan state to work in the hospitals there and back every day. Our Canadian medical personnel are urgently needed there and the PM made it quite clear that should the US make threats to 3M or any other providers to stop the flow of medical necessary supplies or equipment that there could or would be consequences. That is essentially what 3M indicated to the WH as well. Covid19 knows no borders.