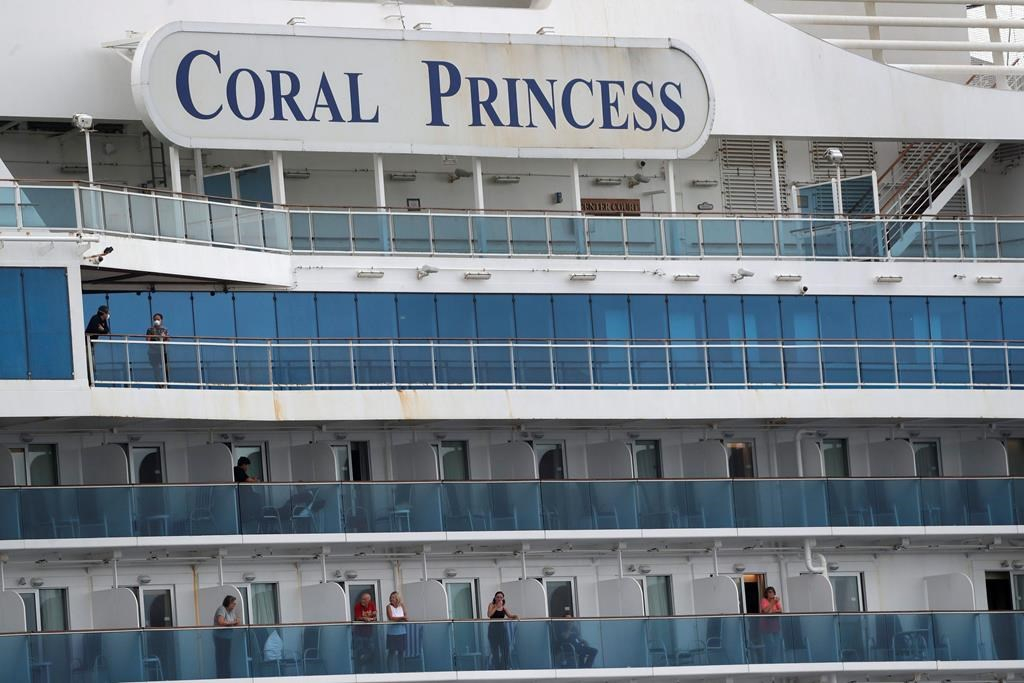 Passengers look out from the Coral Princess cruise ship while docked in Miami, on Monday, April 6, 2020. File photo by The Associated Press/Wilfredo Lee
Previous story
Next story

As Canadians said farewell to the COVID-19-stricken Coral Princess cruise ship on Monday for their long journey home, other recently repatriated high-seas travellers coped with the emotional exhaustion of their new normal on dry land.

A day after Foreign Affairs Minister Francois-Philippe Champagne said on Twitter that Canadians on the Coral Princess would be coming home, their long journey with two pit stops in the U.S. started.

There were 97 Canadian passengers aboard the ship, which left Santiago, Chile, on March 5 and docked in Fort Lauderdale, Fla., on Friday.

The Canadian Press communicated with two couples travelling on the ship, who said that passengers had been allowed to leave and were on a bus headed for the Miami airport.

"We just touched down in Toronto," North Vancouver resident Sanford Osler said in an email late Monday night, about two hours after a charter plane bearing the Canadians was due to land.

A statement from Princess Cruises said 139 guests left the ship on Monday morning as part of an effort that gave priority to "those who departed on a chartered flight to Canada." It said 274 passengers remained on board.

Earlier Monday, Gary and Sue Lyon said in an email they were on a bus waiting to board a charter flight to Toronto via Columbus and Newark.

"We are all feeling relieved, happy and excited to go home. We will go home and self-isolate for 14 days," they said.

"We appreciate all the crew and staff of the Coral Princess have done for us during this very challenging time. We wish them all the best."

Osler, who was travelling with his wife, Betty Ann, said all passengers were wearing masks and gloves, and that he felt physically healthy.

"Physically, I feel normal ... Emotionally, I'm relieved to be off the ship, obviously, and on the way home. Although now we have further uncertainties," Osler said by telephone from Florida before the flight home.

Osler said he was getting "mixed signals" about whether he and his wife will have to be quarantined in Toronto for 14 days before moving on to Vancouver.

Champagne tweeted Sunday that those who don't have COVID-19 symptoms would be able to return home on a charter aircraft Monday.

"Upon arrival they will be screened again and subject to a mandatory 14-day self-isolation," Champagne wrote.

Two people aboard the ship have died, and 12 have tested positive for COVID-19, Princess Cruises has said. Still more are experiencing flu-like symptoms.

This past week Canadians on the MS Zaandam and MS Rotterdam arrived in Canada on a plane chartered by operator Holland America.

Catherine McLeod and her husband, Paul, arrived home from the Rotterdam on Friday, physically and mentally exhausted. They began their 14-day isolation in the comfort and safety of their own home.

"The isolation is not difficult as we are too mentally drained to be wanting to do anything," McLeod said in an email. "We are in a state of shock really as we now can reflect on the danger we faced and how lucky we are to have walked away from that situation healthy."

She praised the captain of the ship for taking swift action to lock it down and prevent further spreading of the virus.

"Isolating is a small price to pay considering the possible consequences of not doing it. People who have not self-isolated are incredibly selfish fools," she said.

"Try to be patient on the way home as there are many people who simply do not understand the gravity of this virus and the lack of social distancing just about drove me crazy," she wrote. "Moronic behaviour."

Global Affairs said it is monitoring the progress of 49 Canadians and eight crew members on seven other ships.

The department says it is not aware that any of them have tested positive for the novel coronavirus.

The Diamond Princess was quarantined for two weeks in Yokohama, Japan, as 700 of the 3,700 people aboard became infected.

The federal government evacuated 129 Canadians from that ship and brought them to eastern Ontario for quarantine on Feb. 21, but 47 Canadians infected by the virus had to stay behind in Japan for treatment.

The Public Health Agency of Canada is telling Canadians to avoid travelling on cruise ships, but delivered that firm warning March 9, a few days after the Coral Princess set sail.

This report by The Canadian Press was first published April 6, 2020.