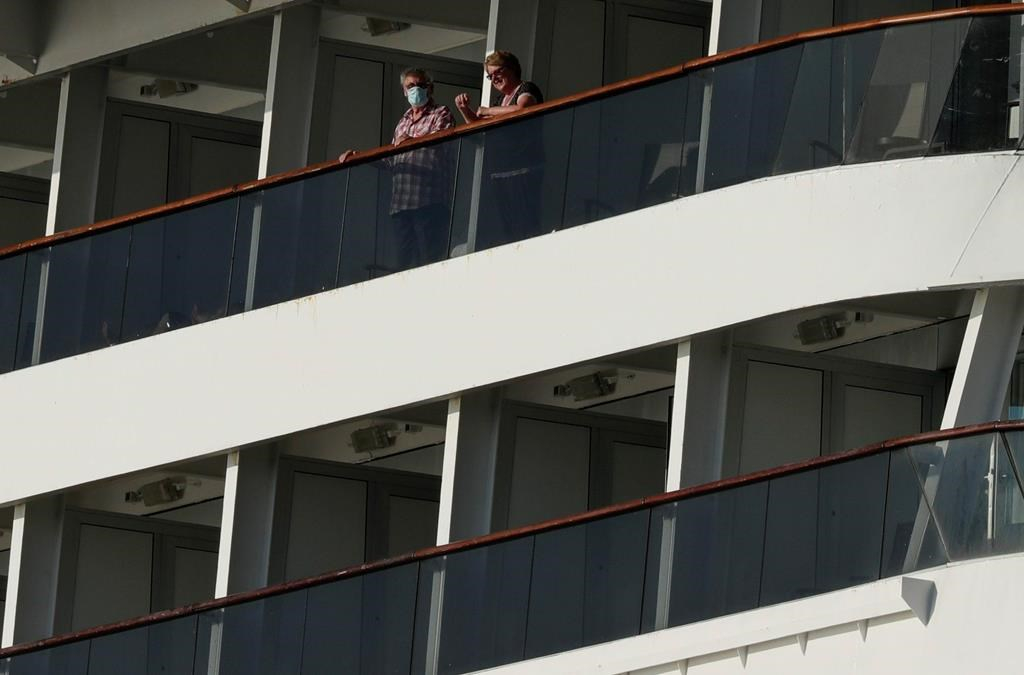 Passengers, one wearing a protective face mask, look out from the Zaandam cruise ship, anchored in the bay of Panama City, on Friday, March 27, 2020. File photo by The Associated Press/Arnulfo Franco
Previous story
Next story

An Ottawa woman stranded at sea for more than a week on a cruise ship where four passengers have died said Monday she's "had it" after being moved to another ship that's en route to Florida.

Catherine McLeod and her husband, Paul Innes, were among the 248 Canadians aboard the MS Zaandam, a cruise ship that had been anchored on the west side of the Panama Canal since mid-March after reporting nearly 200 passengers and crew were exhibiting flu-like symptoms.

The couple was transferred Sunday to the Zaandam's sister ship, the MS Rotterdam, alongside hundreds of other passengers who showed no such symptoms, she said as both ships set sail towards Florida.

McLeod told The Canadian Press the lingering uncertainty is taking its toll on her and her husband.

"There's no guarantee the coronavirus won't be on this ship either," she said.

"I still have lots of Lysol wipes and I'm wiping down everything — cutlery, cups, you name it. I don't want to go home in a body bag."

While the couple is physically healthy, their mental health is getting worn down.

"You try to keep your spirits up, but I find I'm getting so that I just want the hell off this thing," McLeod said.

"I've had it. It's not like I'm going to crack or anything, but God almighty, get me out of here please."

A spokeswoman for Global Affairs Canada said Monday no COVID-19 cases have been confirmed among Canadian citizens who were on the MS Zaandam.

Holland America, the company that operates the MS Zaandam and MS Rotterdam, said in a statement it is "still finalizing the details for where and when" the 2,520 passengers and crew aboard both ships will disembark.

Cruise ships carrying Canadians on the move toward Florida

The ministry, however, has not said how it plans to repatriate the Canadians on board the ships.

"We continue to engage with the passengers and Holland America to co-ordinate travel for Canadian citizens back to Canada upon disembarkation," Global Affairs said in a statement.

The ships are a few days away from Florida, where the Zaandam was originally scheduled to dock in early April, it said.

Florida Gov. Ron DeSantis said Monday he does not want sick passengers to be treated in his state, stressing hospital beds need to be saved for residents and not "foreign nationals."

DeSantis said he wants the cruise line to arrange to have medical personnel dispatched to the ship instead, noting South Florida already has a high and growing number of COVID-19 infections.

The Zaandam left Buenos Aires in Argentina on March 7, before the federal government warned Canadians to stay away from cruise ships. Its passengers have not been on land since March 14, when they were ashore in Punta Arenas, Chile, Holland America said.

Every port on the Zaandam's route shut its doors, including Panama, which would not allow the ship passage through the Panama Canal until Canada helped broker a deal over the weekend.

Passengers on the Zaandam have been isolated in their rooms since March 22.

"We don't have much ambition to do much, and not much room to do anything," she said. "You read a bit, put the book down, look at the movies, but it's just hard to focus, we just want out of here."

She said it would be helpful to have a sense of what's happening and to see the end in sight.

"I want to see my kids, and the grandkids and my dog," she said. "My poor old cocker spaniel, Charlie, she's gonna think I've deserted her."

—With files from the Associated Press