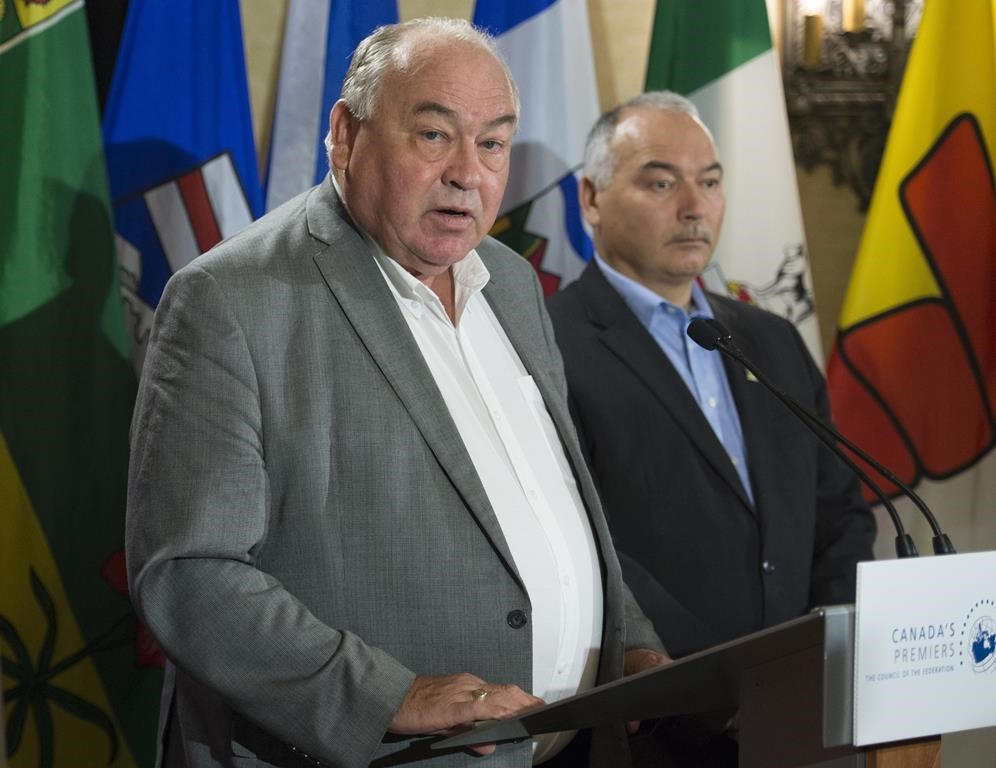 Bob McLeod, left, of Northwest Territories and Joe Savikataaq, of Nunavut, speak to the media during a meeting of Canada's Premiers in Saskatoon, Sask. on Thursday, July 11, 2019. File photo by The Canadian Press/Jonathan Hayward
Previous story
Next story

Each community in Nunavut is getting federal funds to provide food for youth and elders during the COVID-19 pandemic.

The Government of Nunavut partnered with Nunavut Tunngavik Inc, an organization that represents Inuit from Nunavut, to leverage over $2 million so communities can create and deliver food programs that fit their needs.

Aluki Kotierk, the president of NTI, and Joe Savikataaq, the premier of Nunavut, announced the money on Friday, April 3, at the GN’s daily COVID-19 update.

There aren’t any confirmed cases of COVID-19 in Nunavut, and both Savikataaq and Kotierk emphasized the importance of continuing to practise physical distancing, hand washing, and avoiding gathering in groups, as preventive measures.

Ensuring that people have enough to eat is another way to prepare for the eventuality of COVID-19 spreading in Nunavut.

“It’s crucial that we make this investment now,” Kotierk said.

Many children rely on the food they get from the breakfast and lunch programs delivered by schools, but schools have been closed since March 17, and there are no signs that they’ll reopen in the near future.

Nunavummiut need to have access to good, nutritious food to keep their immunity up, Kotierk said.

“We want Inuit to be in the position where they can fight off their virus if it comes to our communities,” she said.

The contributions to communities should be finalized this week.

Part of the money to fund these food programs is coming from NTI’s share of the $305-million Indigenous Community Support Fund from the federal government.

Of that, NTI received $6 million.

Schools were originally scheduled to be closed until April 7, but the GN announced last week that they would continue to be closed for another two weeks after that, and their closures will be re-assessed at that time. However, government officials said that teachers could re-enter schools to get resources to share with their students, and that communities could use school kitchens as facilities from which to run food programs.

Dr. Michael Patterson, Nunavut’s chief public health officer, said that people preparing food will be expected to follow the same protocols that restaurants currently have, to avoid having people gathered together.

That means preparing food as takeout.

“It’s important to recognize that the programs are vital in a territory with significant food insecurity,” Patterson said. “Finding ways to make these programs work is vital to reduce harms caused by the measures we have already taken.”

The harm Patterson is referring to is that school breakfast and lunch programs were shut down with the schools.

Four teachers from Joamie Ilinniarvik School in Iqaluit started to address the gaps created by a lack of school-based food programming over a week ago, by coming up with a budget to create a bagged-breakfast program.

They now give out over 300 bags of breakfast in Iqaluit a morning.

While she was announcing the funding, Kotierk addressed Inuit who live in Nunavut, saying that she knows that physical distancing isn’t Inuit culture.

“We love to show our love through eating together, by using our kinship network, by showing affection to our children,” she said.

She said that it’s important to live differently in the short term, to reduce the impact that COVID-19 has on communities in the long term.

“So we are not in the position that COVID-19 impacts us in similar ways that other infectious diseases have impacted our communities, families and society in the past.”