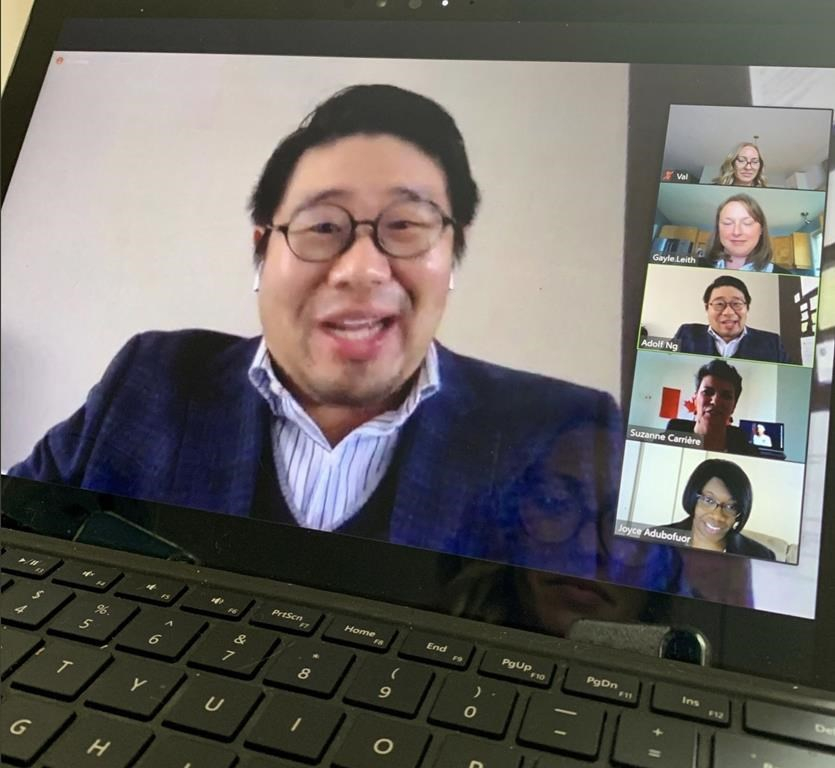 The federal government fast-tracked the Canadian citizenship process for a University of Manitoba professor, citing the "urgent need" to facilitate his planned research on COVID-19.

Adolf Ng, whose expertise is in supply chain logistics, was able to skip the citizenship test and swear the oath in a ceremony held via video conference on April 1.

The government said the virtual ceremony was a first-of-its-kind event, spurred on by the promise that Ng's research could help develop strategies to manage crucial supply chain issues created by the pandemic.

How Canada and other countries are competing for scarce medical supplies has been a dominant issue in recent days.

Ng's work — which involves travel to Canada, China and Hong Kong — needs to be carried out immediately, the government said.

"Granting him citizenship makes it easier for him to carry out his work, by allowing him to travel on a Canadian passport," said Kevin Lemkay, a spokesperson for Immigration Minister Marco Mendicino.

While passing a citizenship test is a requirement for most applicants, the minister does have the right to bestow citizenship to "reward services of an exceptional nature to Canada."

Among other reasons, the provision has been used in the past to give athletes Canadian citizenship so they can compete on behalf of the country in the Olympics.

A decision was made to use it in this case, said Lemkay.

"Global supply chains are critical to safeguarding the continuity of trade, commerce, health and food security for all Canadians," Lemkay said.

Ng, 41, moved to Canada in 2013 for a position teaching and researching supply chain management at the Asper School of Business in Winnipeg.

He applied for citizenship in the fall of 2019, and had his citizenship test scheduled for the end of March.

But his test was postponed, one of several ways the Canadian immigration system has ground to a near standstill as officials seek to ensure physical distancing.

At nearly the same time as he was informed of that delay, he was among the dozens of academics approved for some of the $275 million in federal funding earmarked for research into COVID-19.

Ng's $258,900 grant is being covered by the federal government and the province.

His intent is to examine how the globally-intertwined systems of production for everything from crucial medical supplies to groceries dealt with wild swings in demand due to the pandemic. It will involve face-to-face interviews with companies and people across Canada, and in China.

"We should be able to get all this stuff quickly so that we are able to generate some initial research findings that will be helpful to the government in terms of policy-making, or encouraging a public discussion," Ng said.

Though he could travel on his permanent resident card, he viewed having the passport as a more secure option, considering current global upheaval.

If the university signs off on the ethics of having him travel, he was hoping to leave at the end of the month, knowing that mandatory quarantine regulations mean the process will be slow.

So, he approached Immigration, Refugees and Citizenship Canada asking if he could take the test as quickly as possible, and then in turn the oath, so he wouldn't lose time on his research.

They offered to move straight to the ceremony.

Ng said officials were so committed that it feel "real," the citizenship judge ensured there was an image of Queen Elizabeth II in the background and a Canadian flag.

Three other department officials joined by the online platform Zoom to watch him take the oath.

The experience, Ng said, made him feel good about choosing to belong to a country where the government listens when people say they need help.

"It raises my sense of responsibility of being a Canadian," Ng said.

Ng's ceremony was a one-time thing, at least for now, said Lemkay.

"The department is examining options and processes for the resumption of service to people who have applied for citizenship, which could include virtual citizenship ceremonies."

Being a member of the

Being a member of the Communist Party of China really should be the only requirement for Canadian citizenship anyways, right?