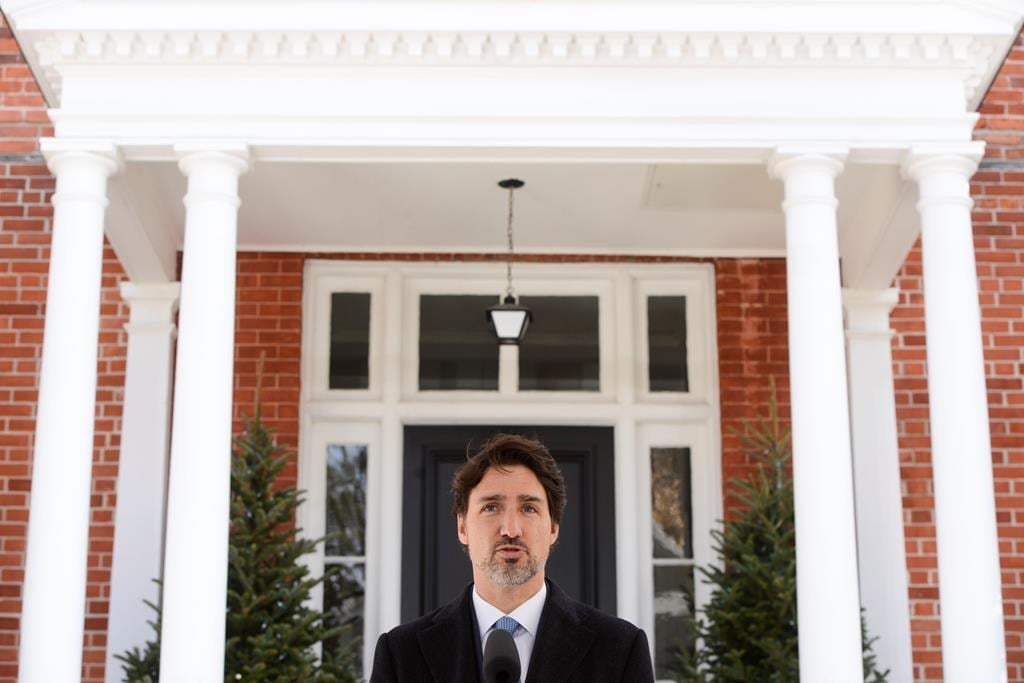 Speaking at his daily press briefing, Trudeau said moves by Canada's big banks to reduce interest rates on credit-card balances for those whose finances have been harmed by COVID-19 is a first step, but that they have to do more.

The Liberals have talked since last month about helping people get loans, possibly federally backed so they can be offered at low rates and on favourable repayment terms and be targeted to households that still have income but may be feeling financial strain.

On Tuesday, Trudeau said the credit package is still a work in progress.

He added that having the banks give extra help to Canadians would not only be good for households, but for major financial institutions as well.

"They know that if we face extremely difficult times for Canadians, for businesses, they too will suffer," Trudeau said in French. "That’s why we are encouraging them to do more."

An association representing dozens of banks in Canada said the program would focus on access to low-interest credit for people and businesses, but declined to provide details on the what still needs to be resolved before the promised program is available.

"Access to low-cost credit, particularly when there's an unexpected shock, is critical to free up short-term cash flow to help Canadians weather the storm," Mathieu Labreche, a spokesman for the Canadian Bankers Association, said in an email.

About $65 billion of the overall federal relief package to date is in the form of low-interest loans, including some with provisions for forgiveness if payments are made by specific dates.

A survey Tuesday from the Canadian Federation of Independent Business, which represents some 110,000 companies, said that one-fifth of respondents who want such help can't get it because they're not eligible. The CFIB also suggested that companies have concerns about how to pay off debt, even low-interest loans, once economic activity restarts.

Added to the mix are rock-bottom oil prices that have led numerous Canadian energy companies to scale back capital investment plans and lay off workers. A spokesman for Natural Resources Minister Seamus O'Regan said the government will take part in a virtual meeting with his G20 counterparts to refine a solution to the cratering price of crude.

One measure the Liberals have pointed to as help is a 75-per-cent wage subsidy for businesses of all sizes to help keep people on their payrolls despite plunging revenues, which the government estimates will cost $71 billion.

Trudeau said opposition parties have the draft legislation that would create the program. Parliamentary approval is needed for the measure, whose terms changed to make it much more generous after MPs and senators quickly approved a package of emergency spending two weeks ago.

Conservative finance critic Pierre Poilievre wrote on Twitter that his party will read the bill "carefully to make sure it does what they claim." Bloc Quebecois Leader Yves-Francois Blanchet asked that the legislation include help to companies to cover some of their fixed costs, such as rent, without the need to take on additional debt to manage expenses.

And NDP Leader Jagmeet Singh, in an open letter to Trudeau, called for the emergency sitting to also make changes to the Canada Emergency Response Benefit.

That $24-billion program is to provide workers who have lost all their incomes $2,000 monthly for up to 16 weeks. More than one million people had applied for by Tuesday afternoon, with more expected Wednesday. A further three-million-plus employment insurance recipients are to be moved over to the new benefit.

Singh is asking that when MPs meet to vote on the wage -subsidy legislation, there also be amendments to the CERB so that income has to have dropped to less than $1,000 instead of zero, to capture contract and gig workers, and that the benefit provide a 20 per cent "danger pay" top-up to all essential workers.

The wage subsidy combined with the emergency benefit puts Canada's federal response package "beyond some of our peers," TD Economics said in a report Tuesday, but warned of gaps, including for students who may not qualify for the CERB.

"All told however, we have so far seen a reasonably convincing response to the sizable income shock currently hitting Canadian families," senior economists Brian DePratto and Sohaib Shahid wrote.

— With files from Mia Rabson