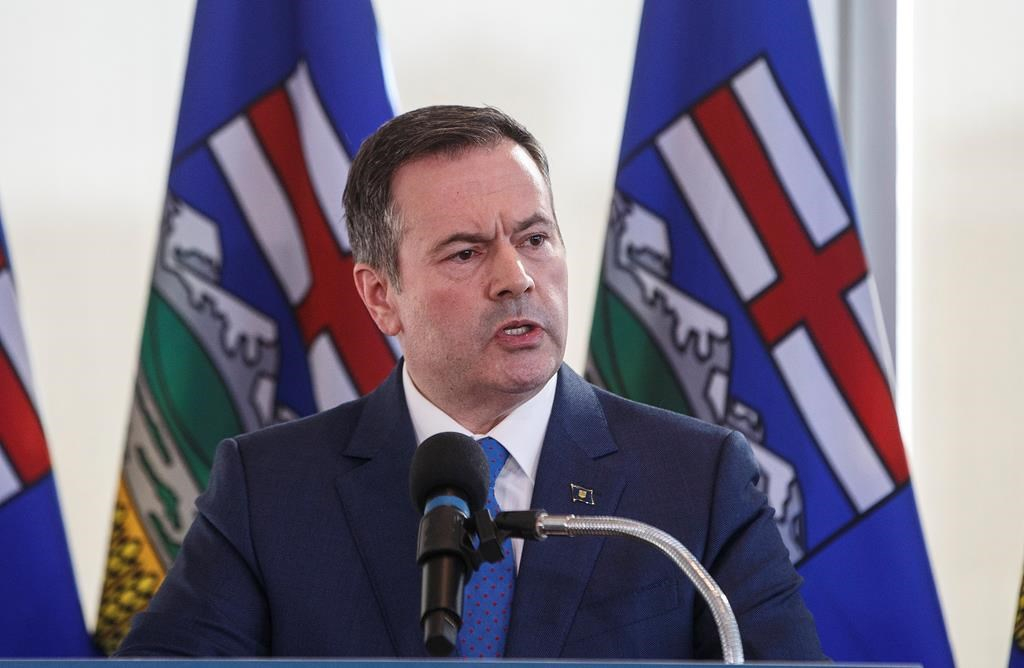 Premier Jason Kenney says Alberta has more than enough protective masks, gloves and ventilators for its own COVID-19 needs, so it's sharing some of its surplus with provinces in more dire need.

Kenney made the announcement Saturday from an Alberta Health Services warehouse in Edmonton, noting that it and eight other warehouses are full of supplies.

He said Ontario will receive protective masks, gloves and ventilators, Quebec will receive masks and gloves, and British Columbia will get masks.

"I for one as an Albertan and as a Canadian could not in conscience watch us stockpile massive amounts of surplus equipment while we see many of our fellow Canadians in some provinces within days of running out of some of these supplies," Kenney told a media teleconference.

Kenney said he began receiving urgent messages about a week ago from other premiers whose health systems are short on equipment. He said he waited to make sure some of Alberta's own shipments had arrived before making the decision to share.

Jitendra Prasad, who is director of procurement at Alberta Health Services, told the news conference that Albertans' needs will still be met.

"I think it's really a great honour that we are able to do this and I think it does demonstrate that Albertans will always stand with fellow Canadians coast to coast," Prasad said.

Alberta to share surplus ventilators, masks and gloves with Ontario, Quebec and B.C.

B.C. Premier John Horgan also tweeted a message of gratitude. Ontario Premier Doug Ford appeared to have a heads-up on the news a day earlier and gave thanks when discussing his province's supplies during a news conference Friday.

"I'm feeling more confident with the inventory that we have. We've had some offers from a province — Alberta. I want to give a shout out to Premier Kenney. He has a few more items than what he needs and he's sharing it with other provinces, and we jumped in line for that as well," Ford said.

The Alberta premier said the number of hospitalizations in the province are below numbers that had been predicted in models for this point, and he says that's due to Albertans following public health guidelines.

He also credited Alberta's early pandemic and planning for the surplus in supplies, as well as its buying power that he says comes from the provincial health system's central administration.

Alberta's recent relationships with both B.C. and Quebec have been fraught after both of their governments stymied pipeline expansions to ship Alberta crude through their provinces.

But Kenney said he's been moved during his weekly conference calls with other premiers, where he said they've expressed "real solidarity" for the economic hardships Alberta is facing, not just from COVID-19 but also the recent collapse in oil prices.

He said the province was looking beyond the disagreements in order to save lives, but said he hoped other provinces wouldn't forget the gesture later.

"We Albertans contribute $20 billion more to the rest of Canada than we get back in benefits every year. That helps to fund their hospital systems, their heathcare systems, their schools and social services," Kenney said.

"So I hope that one of the lessons to be learned from this crisis is that we are all in this together."

Just so you know the fact

Just so you know the fact that Alberta has more mask than other provinces has little to do with Kenny and his running of the province but rather the innovation of its citizens via the recently gutted education system. tiy can read here.
https://www.reddeeradvocate.com/news/red-deer-college-joins-the-battle-a...

There is no way that I could

There is no way that I could ever believe that Jason Kenney planned for the stockpile. It was likely the wise Alberta health care professionals who saw the potential for a pandemic when the coronavirus was first starting leaving China back in December, and quietly issued the purchase orders irrespective of the politicos.

I also think that, while giving these surplus supplies to other provinces in dire need is a very good thing and should in and off itself be congratulated, Jason Kenney made this into a cheap photo-op with his talking head nattering away for the cameras. I cannot believe that any other premier would make themselves and not their top health officials the centre of attention during a pandemic crisis.

I am reminded of former BC premier Christy Clark who purposely used raging forest fires as a backdrop for several of her photo-ops where she issued cheeky statements about how BC is especially "suffering from climate change" interspersed between her policies to dramatically increase emissions. There they are, the approval of the Trans Mountain expansion project mere months after making a trip to Calgary to solicit funds for her party (of course, that's just a mere coincidence, isn't it? CAPP got what it paid for, temporarily); the approval of a huge LNG development project in northern BC without regard for the demand economics in Asia or BC's emissions goals (and now the NDP are equally blinkered to overseas demand); withholding egregiously needed transit funding from Metro Vancouver while she forced the big city -- and only the big city -- to go through a damaging rage fest of a transit referendum while also mocking and condescending toward Metro mayors and citizens, and so forth.

These are the reasons Clark is now the ex-premier. She lost nine Metro ridings. LNG lives on ... for now. TMX is still stalled in court and is also subject to the instability of global oil. Climate change continues. But transit in the Metro is moving ahead under new senior government leadership.

"Albertans contribute $20 billion more to the rest of Canada than we get back in benefits every year."
Can anyone point me to the *facts* as to how much of Alberta's contributions to the federal government come from the petro industry, and how much Canadians have paid to/for federal support/aid/etc. to the Alberta petro industry? Including but not limited to the (still makes my blood boil to think of it) purchase of TMX?

He just had to add the crap

He just had to add the crap about how much Albertans contribute to other provinces every year. It is crap, and every person who has honestly looked at it, knows that. But, this sells to the base in Alberta; something that gets repeated enough, that it becomes the truth. Grateful for the masks, but, well, Kenney could sure learn a lot about how to be gracious. He could, even, for example, take note of all the federal support Alberta has had over many years as an example of how things can work. He could suggest that there is so much pan Canadian money invested in the oil play in Alberta, we'd be foolish not to continue as a partner. But no, instead we get the bluster and we get crapped on by successive Alberta premiers; and the implied threat that it better be remembered that Alberta gave yet again. It is really getting very old.