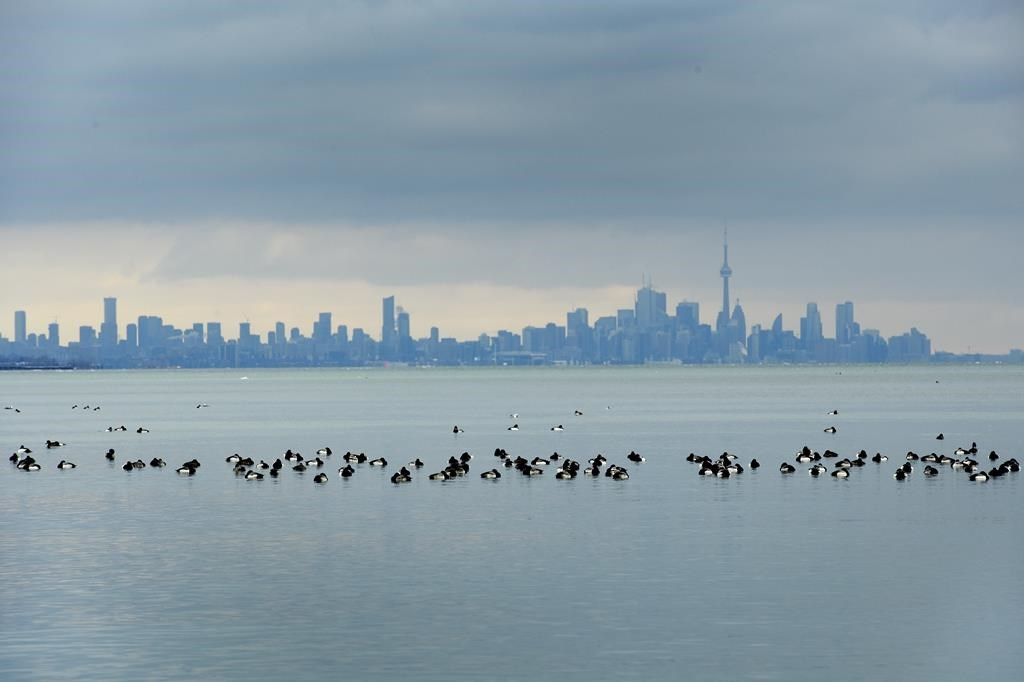 Birds swim in the cold waters of Lake Ontario overlooking the city of Toronto skyline in Mississauga, Ont., on Thursday, January 24, 2019. File photo by The Canadian Press/Nathan Denette
Previous story
Next story

Ontario's wildlife will likely experience a population boom thanks to an ongoing state of emergency that is keeping most people in the province at home, a pair of experts say.

It's not just that there are fewer cars on the roads or less pollutants in the environment, the experts say — although both factors are important.

It's the timing of the COVID-19 pandemic, and the ensuing physical distancing and isolation measures to fight, that could boost the life expectancy of wildlife.

"This is the season of birth, this is the season of the dispersal of the younger animals that were born last year," said Brian McLaren, an associate professor in wildlife at Lakehead University, on Tuesday. "This could be a setup that's ideal for next year to be a stronger population."

Birds, fish, and mammals are at their most vulnerable in the spring as they migrate, spawn, or venture out of hibernation. Mating habits are also affected by humans because their presence can be a stressor for animals, leading to smaller litters, premature births, or abandoning of young.

But with humans largely subtracted from the ecosystem this spring, animals should be able to thrive.

"We know that if office towers during spring migration are not lit up at night then there's going to be fewer night-time collisions of migrating birds, things like that," said Emily Rondel, the vice-president of the Toronto Ornithological Club, referring to the mandatory closure of non-essential businesses.

"We also know that there's less people in green spaces. So that means that during this vulnerable time, birds — when they're not migrating or flying — hang out and forage and feed without the stress of always having to evade people."

As Premier Doug Ford's government voted Tuesday to extend Ontario's state of emergency another 28 days, McLaren and Rondel speculated the move would lead to a reprieve for animals.

Data on wildlife populations won't be available until this fall, at the earliest, but they expect more time without humans around will be helpful to wildlife.

An additional 28 days "is a real boost to their survival," said McLaren. "Life is tough, toughest probably, in the spring for animals because everything's wet. I think 28 days is an incredible boost to just giving them lower stress levels."

A study from the University of Toronto last week found that air quality had greatly improved in Toronto since restrictions on large public gatherings were put into effect. That small change in the environment could kickstart the food chain.

Although fish and other aquatic creatures will remain largely untouched by the absence of humans, mammals that feed along the water's edge may benefit from people staying home and not disrupting their hunting grounds.

"If you want recovery of food chains that include minks and muskrats and those things that will tolerate cities, you can expect those to respond really well," said McLaren.

A bigger question, McLaren said, is if there will be changed attitudes towards wildlife when the pandemic ends.

"The way this pandemic has us thinking about our own mortality, it has helped us realize that we are also animals," said McLaren. "I just wonder whether there's going to be after this, when there's a return to normalcy, if we'll be much more empathetic."