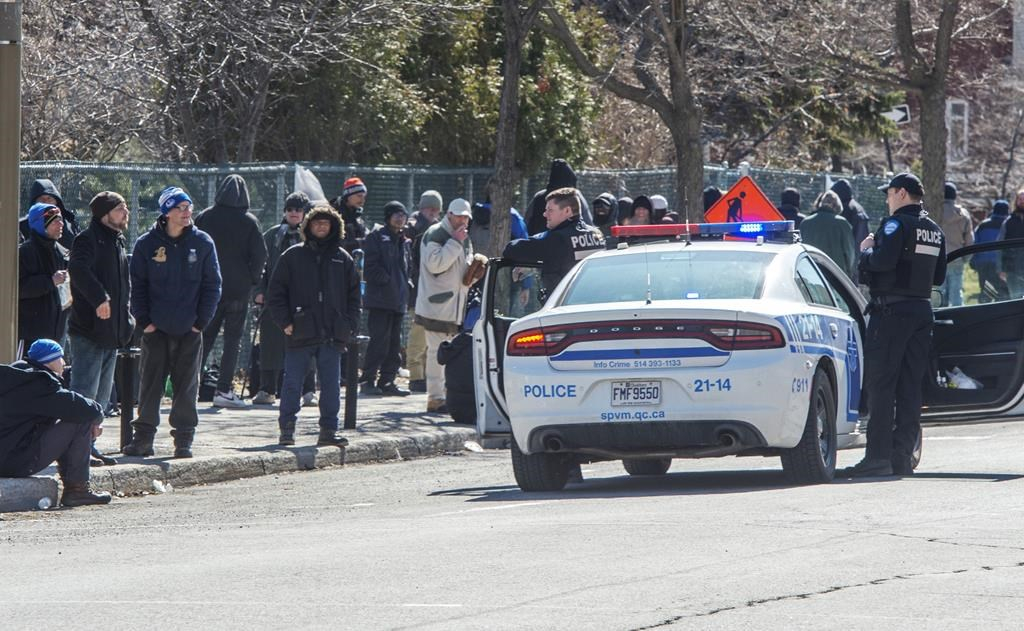 Police remind people to keep their social distance as they lineup to get into a homeless shelter on Tuesday, March 31, 2020 in Montreal. File photo by The Canadian Press/Ryan Remiorz
Previous story
Next story

Corey Yanofsky, a data scientist living in Ottawa, took his dog out for a walk last week and ended up with an $880 fine for standing in the wrong place during the COVID-19 pandemic.

Obi Ifedi of Ottawa was walking through a park with his daughter April 4 when he was approached by a city bylaw officer. He says he was eventually tackled and ended the evening with a bruised lip and fines totalling more than $2,000.

Then there was Melissa Leblanc of the Montreal suburb of Beaconsfield, who was greeted by police at her door April 5 after family and friends wished her a happy birthday from their cars.

They are just a handful of the hundreds of Canadians feeling the impact of policies that governments have put in place since March aimed at stopping the spread of COVID-19. But experts in criminology and law are pushing back against the conventional wisdom that giving police the power to levy heavy fines will make people safer.

They argue public health directives are unclear, and the way they are being enforced is counterproductive and a distraction from the failure of the state to better prepare for COVID-19. Moreover, they say, the heavy fines disproportionately affect people of limited means, people of colour and marginalized communities.

Ifedi, a stay-at-home father originally from Nigeria, said he and his daughter left an Ottawa park after being ordered to do so. But he alleges the agent followed and continued to scold them as they walked home. Ifedi said he told the officer there weren't any signs stating the park was closed.

"He didn't like me talking back," Ifedi said in an interview Tuesday. "That's when he said: 'You know what, I will write you a ticket. Give me your name.' "

Halifax-based lawyer David Fraser said police in his city have previously been called out for racial profiling. A 2019 report commissioned by the provincial human rights commission indicated black males in the Halifax area were nine times more likely to be stopped by police than the general population.

Fraser, author of the Canadian Privacy Law Blog, said there is little reason to believe profiling has stopped during the pandemic. And he said the province's public health orders are unclear, hastily drawn up and may lead to over-policing.

For example, he said, on Sunday, Halifax Regional Police denied rumours their officers were stopping all vehicles carrying two or more people in order to check for non-essential travel. "While inspecting vehicles can at times be part of our #COVID-19 enforcement efforts if necessary, NOT ALL vehicles are being stopped," the police said on Twitter.

Fraser said that message strongly suggests police are sometimes stopping cars, even though nothing in the public health orders gives police added authority to stop vehicles or interrogate people.

In response to a question about how the province's public health directives give officers the right to stop vehicles, Halifax Regional Police spokesman Const. John MacLeod said questions about the specifics of the order are the responsibility of the province.

"As always, in every situation, our officers are expected to conduct themselves in an unbiased and respectful manner," he said in an email Tuesday.

Fraser also took issue with a March 30 order by Nova Scotia Justice Minister Mark Furey, which stated police "shall escalate their efforts from public education to enforcement, in accordance with officer discretion."

If police are being told that whenever they see an infraction, issue a ticket, Fraser said, "we know that police are present in minority communities way more than they are in affluent communities."

Between April 4-13, their research indicates there were at least 735 violations of public health and emergency law offences, most of which took place in Quebec (324), Nova Scotia (228) and Ontario (161).

Luscombe, a PhD student in the Centre for Criminology & Sociolegal Studies at the University of Toronto, said ticketing people disproportionately hurts those who don't have room to comfortably self-isolate or who haven't been properly educated about the spread of COVID-19.

He said he is not aware of any criminological research that indicates ticketing is an effective way to deter bad behaviour.

"You only have to look at speeding as one example where ticketing is used as the main form of social control by police," he said in a recent interview, "but we don't necessarily see an end to speeding, do we?"

McClelland, a postdoctoral fellow at the University of Ottawa, researches the criminalization of communicable diseases, particularly HIV. He says it's still early, but he expects this crisis to produce similar policing patterns that emerged from the AIDS crisis.

"Black and brown people, and poor and Indigenous people are over-represented in criminal cases related to HIV," he said.

McClelland warned against a government approach on COVID-19 that singles out people for jail time or fines.

"What that does is individualizes our response," he said in an interview. "It means we think we can point out one person and say, 'They are the person to blame — put them away.' But what that does is that we don't ask broader questions about why our health-care system hasn't rolled out massive testing."

Meanwhile, Yanofsky, 41, said he is contesting the hefty ticket he received April 5. The park had signs, he said, stating the area was closed to limit the spread of COVID-19, "except for walk through."

"The city's enforcement ... is using an extremely limited meaning of 'walk through,'" he said.

Ifedi, 39, said he has hired a lawyer and plans on contesting his fine. He said the bylaw officer followed him, asking for his name, and then called over two police officers who happened to be close by.

Roger Chapman, director of By-Law & Regulatory Services for the city of Ottawa, said his department "denies any improper conduct allegations and the characterization of the incident."

"However, in light of potential court process, BLRS will not provide any further comment."

Michael Bryant, executive director of the Canadian Civil Liberties Association, said he is working with Ifedi and assessing whether the CCLA will intervene in the case, which he said "raises the possibility of racial profiling."

Leblanc, whose birthday celebration took a sour turn, said police told her they had received a call from a neighbour, and they threatened her with a $1,500 fine and jail time for a subsequent offence.

In the end she got off with a warning, but she worries about the climate police are working in. "I know they were stressed," she said in a recent interview. "But don't take it out on me."