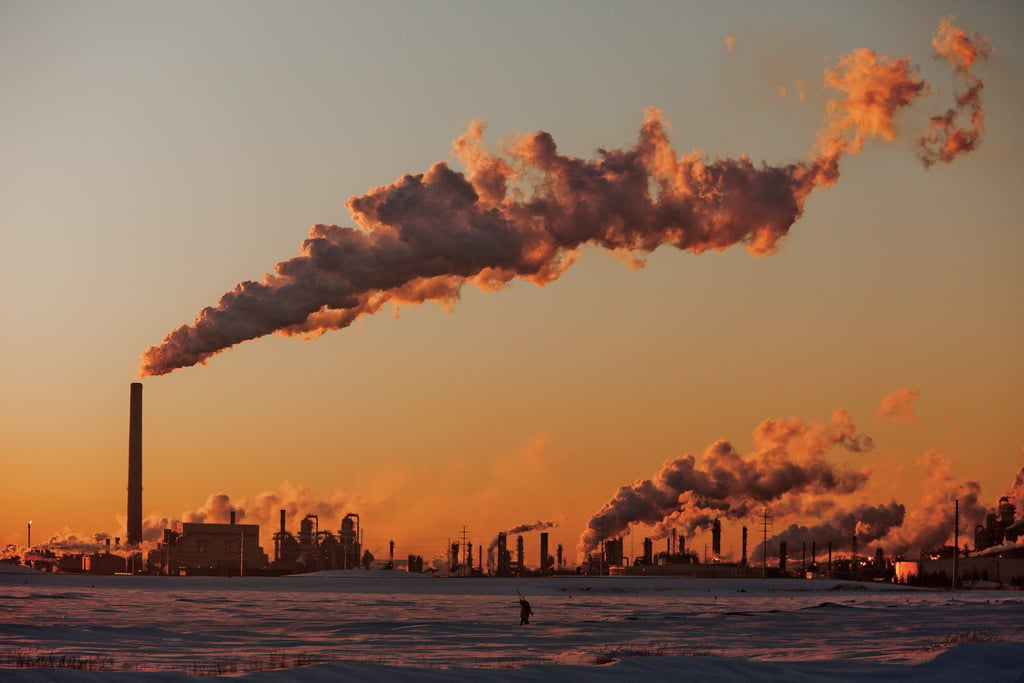 The skyline of an oilsands plant near Fort McMurray, Alta., in 2012. Photo by Kris Klug on Flickr
Previous story
Next story

Every US$15 per barrel drop in the price of oil translates to a dent of roughly $3.5 billion in federal deficit, said Parliamentary Budget Officer Yves Giroux. And with a flood of unwanted oil hitting the market at the same time as a drop in demand caused by the pandemic, prices for the commodity are spiralling, with U.S. oil hitting negative Monday.

“It will have significant negative impacts on the deficit,” Giroux told National Observer.

“That might be drowned in the overall fiscal picture, with COVID-19 and government response to the slowdown.”

Before COVID-19, the federal government projected a deficit of C$28 billion. But with Prime Minister Justin Trudeau pouring cash into emergency response measures and financial aid for people and industry, Giroux said it could now hit $200 billion.

The interconnectedness of oil’s current spiral and the COVID-19 crisis make it difficult to determine exactly how much impact each factor has on the deficit. But Giroux said it’s possible falling crude prices could contribute about $7 billion to $10 billion to the deficit.

The impact of the meltdown will be felt most harshly by Alberta, but will also deliver damaging blows to Saskatchewan and Newfoundland and Labrador, he added.

Canadians can take comfort from knowing that the federal government can afford to ride out the crisis, Giroux said, adding that Canada was in a better financial situation than other G7 countries prior to the pandemic.

“We are among the countries that can afford it,” he said.

What does negative oil mean, and how did it happen?

When oil prices go negative, that means sellers are paying people to take their product away.

Every US$15 per barrel drop in the price of oil translates to a dent of roughly $3.5 billion in federal deficit, said Parliamentary Budget Officer Yves Giroux. And right now, oil prices are spiraling.

That’s precisely what happened this week with the U.S. benchmark West Texas Intermediate, which hit nearly negative US$40 on Monday before rebounding to about US$10 Tuesday. (A benchmark is a reference point for various types of crude, which can vary in quality depending on where they come from.)

Oil prices began to fall drastically last month. Part of this was caused by a dramatic drop in demand for petroleum ⁠due to COVID-19 — fewer people are using cars, for example ⁠— but a price war between Saudi Arabia and Russia made it worse as both countries flooded the market with excess supply.

“There’s too much oil being produced for the level of demand,” said Richard Masson, a former oilsands policy advisor to the Alberta government and an executive fellow at the University of Calgary’s School of Public Policy.

“People with physical oil find they have no place to put it…That problem is large, and it’s not going away until we start driving our cars again.”

Oil storage facilities have rapidly filled up with crude that no one wants to buy. Some companies are even paying to keep tankers full of oil floating outside major ports, simply to have somewhere to put the excess supply.

The price of oil is determined by futures contracts, which are agreements to buy and sell the commodity at a set amount at a certain point in the future. These contracts are often sold and resold before the crude is actually delivered, but Tuesday is the deadline to finalize contracts for May.

And so buyers this week, struggling to find places to store their oil, rushed to dump their contracts for any price they could ⁠— even if that meant paying buyers to take the product away.

“They have to sell,” Masson said. “Those folks got caught because no one wants to buy.”

The Organization of the Petroleum Exporting Countries (OPEC+) has tried to prevent collapse by agreeing to cut production starting May 1, hoping to artificially prop up crude prices. But those measures haven’t worked so far, and some OPEC+ members were set to discuss next steps Tuesday.

Masson said Canadian oil will likely also go negative at some point in the next few weeks.

The benchmark price for Canadian oil, Western Canadian Select, hovered above zero Tuesday, dipping briefing to US$0.13 per barrel before recovering to just below US$4 as markets closed.

‘Akin to a natural disaster’

The precipitous drop in crude prices will hit Canada’s coffers hard, with ripple effects across the economy. But it will hurt most in Alberta, where the economy largely hinges on oil.

In February, Alberta Premier Jason Kenney tabled a budget that relied on prices of US$58 per barrel to balance the province’s finances. Now, that budget is essentially out the window.

In 2008-09, the energy sector was there to support Canadians, as auto manufacturers got federal help.

Ottawa’s announcement last week was a good start, but Canada’s energy sector needs much more action to survive this unprecedented shock and protect hundreds of thousands of jobs pic.twitter.com/XLeRwCabJG

The federal government announced an aid package for the oil and gas industry Friday, offering the sector a combined $2.5 billion, including $1.7 billion to fund the cleanup of aging, risky ‘orphan wells,’ whose owners have gone bankrupt, and wells that are inactive.

But the industry is suffering, and was already in a weak position after years of low prices. Calgary-based Husky Energy has cut about $1.7 billion from its 2020 budget since mid-March ⁠— and that’s just one company, Masson said.

Normally, large companies could borrow money to carry them through the pandemic, as oil prices are expected to rebound afterwards. But the value of petroleum companies is often based on what their oil and gas reserves are worth. Right now, that amount is plummeting, meaning banks could deny companies more loans and even demand they pay up on existing loans now, Masson said.

“That can create a wave of problems,” Masson said. “Way more orphan wells, people getting laid off all over the place.”

Giroux said it’s important to understand that the drop in oil prices ⁠— and the rebounding effects on the economy ⁠— are temporary.

“It’s not like the economy crumbled by itself, it’s akin to a natural disaster,” Giroux said.

“Things will get better once the pandemic is behind us. The sad thing is, we don’t know when that will be.”

Editor's Note: This story was updated at 7:28 p.m. to correct that the federal government's aid funding to oil and gas companies was earmarked for both orphan wells and inactive ones.

Federal deficits do not

Federal deficits do not "worsen". They are either appropriate or inappropriate depending on the outcome required. Canada can always "afford" the expenditures required to deal with the pandemic crisis because it owns a central bank which issues a sovereign currency - and can issue currency without limit: