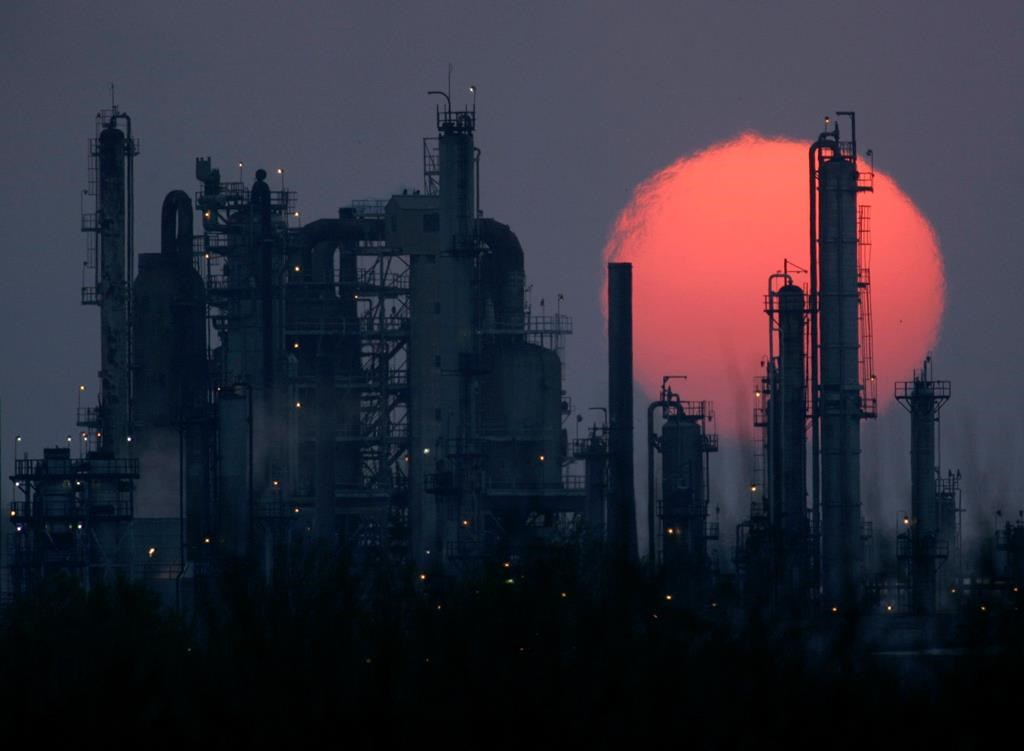 An oil refinery is silhouetted against the setting sun on Apr. 24, 2008 in El Dorado, Kan. The cuts in the oil patch are continuing as companies adjust to lower oil prices in the wake of the pandemic. File photo by The Associated Press/Charlie Riedel
Previous story
Next story

A move by Husky Energy Inc. to halt production of 80,000 barrels per day takes the total reduction in Canadian crude output to about 365,000 bpd since the onset of measures to deal with the COVID-19 pandemic, an analyst says.

That's more than seven per cent of national production of 5.1 million bpd in December.

On Monday, the Calgary-based company also announced a reduction of $700 million in its 2020 capital budget, its second following an earlier cut of $900 million in capital and $100 million in other spending this year.

Its capital budget for this year is now about $1.7 billion, just over half of the $3.3 billion budget announced in December.

"We have taken immediate action to preserve our balance sheet and core business in this commodity price environment,” said CEO Rob Peabody.

Analyst Phil Skolnick of Eight Capital says the Husky production cuts, mainly from its oilsands and heavy oil operations in Alberta and Saskatchewan, take the total announced in Canada so far to 365,000 bpd.

He said the cuts are needed in the current price environment but questioned why Husky hasn't also reduced its dividend to save money.

Last week, Houston-based ConocoPhillips Co. announced it would reduce production by May at its Surmont thermal oilsands project in northern Alberta by 100,000 bpd to 35,000 bpd because of low prices.

Earlier, Suncor Energy Inc. said it would reduce production at its two-train Fort Hills oilsands mining project to one train, resulting in a production cut of about 70,000 bpd.

Many analysts are projecting that Canadian production could fall by more than one million barrels per day if prices remained depressed in the face of global production that still exceeds demand despite an agreement by OPEC and other producers to limit output.

The company lowered its capital spending guidance to about $675 million, down from its original budget of $1.15 billion.

Crescent Point says the revision is largely due to the shut-in of higher cost production and its decision to shift capital spending to the latter part of the year.

Cathedral says it has cut its office and shop staff by 22 per cent, while the remaining Canadian non-field staff has moved to a four-day work week with a corresponding 20 per cent reduction in salary.

The company also cut its CEO and executive vice-president salaries by 25 per cent, while board retainer fees have been reduced by the same amount.

McCoy announced an unspecified reduction in its headcount as well as salary and wage cuts across all levels of the organization including board and president and CEO cuts of 25 per cent and 20 per cent for other executives.

This report by The Canadian Press was first published April 20, 2020.