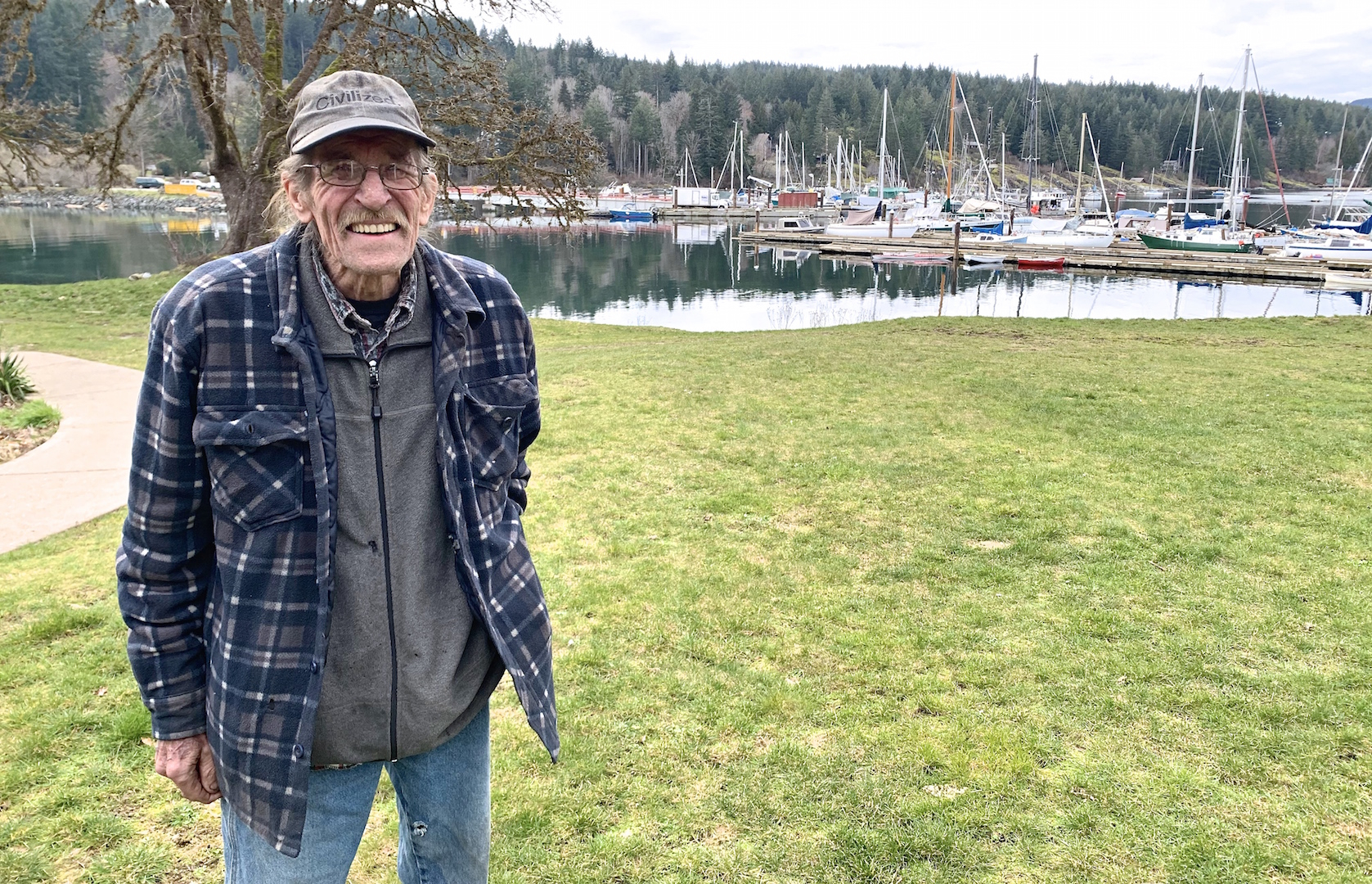 Kidd, 71, says his yearly income comes in around the $20,000 dollar mark, and that includes the top up from the federal government’s guaranteed income supplement (GIS).

“I get the sense there are a lot of seniors in that bracket,” said Kidd. “I guess I classify myself as having a poverty line income.”

Since there is no public transit on Quadra, and he doesn’t own a car, Kidd often relies on rides from friends or neighbours to get around or pick up what he needs.

But that option has been curtailed with COVID-19’s physical distancing protocols, he said.

Kidd, who has obstructive pulmonary disease (COPD) and suffers the attendant respiratory issues, tries hard to self-isolate during the pandemic.

Recently, when he couldn’t get the inhalers he needed at the Quadra Island pharmacy, he had to pay a service $40 to take the ferry off island and pick them up for him in Campbell River.

A cost like that has implications for his limited budget, he said.

“It requires me to alter my budget for other critical needs such as groceries, clothing needs, maintenance needs for my trailer, which are mostly high cost to start with,” he said.

Food costs are also higher with COVID-19 because he can no longer hitch a ride and share ferry costs with friends to buy cheaper supplies off island in Campbell River.

“We have higher food prices on the island already. Food costs are hard enough to budget for on the incomes we have . . . even before the virus,” Quadra Island senior Derik Kidd on making ends meet during COVID-19.

Kidd’s anticipates the price of food is only going to get higher, as disruptions to the supply chain, food production, and food processing during the pandemic consolidate.

“We have higher food prices on the island already. Food costs are hard enough to budget for on the incomes we have . . . even before the virus,” he said.

“And now, with the COVID crisis and the threats to food sources, I can’t see any thing other than prices going up.”

Low-income seniors, particularly in rural and remote areas, are falling through the cracks when it comes to federal response funding during the COVID-19 pandemic, NDP party whip Rachel Blaney said.

The North Island-Powell River MP says seniors aren’t necessarily facing the same number of job losses suffered by millions of Canadians during the health crisis, but they are dealing with increased costs on low or fixed incomes.

An immediate increase to Old Age Security (OAS), but more particularly the Guaranteed Income Supplement (GIS), is the simplest, fastest and most effective way to support seniors during the pandemic, particularly those who are most economically vulnerable, Blaney said.

The GIS is a federal monthly non-taxable top up for (OAS) pension recipients who have a low income and are living in Canada.

There are more than 2 million seniors in Canada recieving the GIS, a spokesperson for the Ministry of Seniors confirmed Friday.

Seniors on low fixed incomes who need to socially isolate are facing a series of extra costs for delivery, medications, or having tasks done for them, Blaney said.

“It means those already struggling financially are now in a deeper pit,” she said.

Additionally, seniors are paying more dispensing fees for medications during COVID-19, as pharmacies are refilling prescriptions one month at a time, rather than the usual three months, to protect medical supplies during the pandemic, Blaney observed.

The federal government has allocated half a billion dollars overall to charities, non-profits, community organizations and food banks to help vulnerable people, including seniors, with essential services and supplies during the COVID-19 crisis, the Ministry of Seniors stated in an email Friday.

A total of $350 million dollars has been allocated to the Emergency Community Support Fund, whose national partners will use existing community-based networks, including those in rural and remote areas, to provide funds in line with local needs during pandemic, according to the ministry.

The funds may go to help provide seniors with services such as transportation to medical appointments or the delivery of groceries or medications.

Additionally, Prime Minister Justin Trudeau has signalled more work underway to support seniors during the pandemic, and there will be further announcements, the ministry wrote.

Seniors living in rural or remote communities may not see benefits from the indirect funding the federal government is providing to non-profit organizations to assist older adults, Blaney observed.

“Not that these organizations aren’t doing good work. But those groups may not have a way to get into rural isolated communities, or a way to identify who is doing that work,” Blaney said. “That’s a huge gap.”

Additionally, not all vulnerable, low-income seniors are necessarily connected to service providers in their community, nor is it entirely clear how or when those funds would roll out, she added.

Canada’s population includes close to 6.6 million seniors who accounted for 17.5 per cent of the population, as of July 1, 2019.

Older adults are the fastest-growing demographic group in Canada. By 2037, the number of seniors will reach 9.6 million, representing close to one quarter of Canada’s population.

Close to 4 per cent Canada’s seniors, or approximately 216,000 people, lived in poverty in 2018, according to the most recent data from Statistics Canada.

Older adults that live alone are more likely to suffer from poverty than seniors that live in families.

The single seniors poverty rate was nearly eight per cent compared to just under two per cent for seniors living in family units.

Isobel Mackenzie, B.C.’s independent seniors’ advocate, said seniors might not be facing a reduction in their income during the pandemic but they are facing economic stessors.

A significant number of seniors are living very close to the margins and they face challenges to pay for the rising cost of food, extra services, or access to internet that they might previously have accessed for free at public facilities such as libraries and seniors centres, Mackenzie said.

There are one million seniors in B.C. and approximately a quarter of them live on the GIC. And 56 thousand seniors are also getting the provincial government’s top up, the B.C. seniors supplement, Mackenzie said.

As a COVID-19 measure, the B.C. government has boosted the provincial seniors supplement by $300 a month for the next three months.

A total increase of $900 annually to a senior on a low income is not insignificant, said Mackenzie, and may allow a senior to afford the Internet for a year, if they budget carefully.

However, B.C. has one of the lowest provincial seniors supplement in Canada with a maximum monthly amount of $49.30 for a single senior and $120.50 for senior couples, and it has not increased since 1987, according to the seniors advocate's 2019 monitoring report.

In terms of federal support the maximum allowable amount for OAS for a single senior is $613.53 month, and $916.38 for the GIS, which an older adult can apply for if their income is less than $18,600 a year.

As a result, a low-income single senior in B.C. typically can receive a maximum of $1,579.21 per month in federal and provincial income supports, or approximately $19,000 a year.

Another COVID-19 support measure the federal government provides is a supplementary GST credit, which benefits low and modest income seniors.

The one-time supplementary payment is worth, on average, almost $400 per adult and $600 per couple, according to the Ministry of Seniors.

Kidd said he uses his GST tax credits and the recent supplement to pay down debt on a line of credit accumulated from running his business before he retired.

There’s often the assumption that seniors have company pensions, or RRSP’s to flesh out their retirement income, Kidd said.

But some seniors, such as himself, don’t have those income investments and are even budgeting for debt load payments on their fixed income, he said.

“I’m sure I’m not the only one in that position,” said Kidd.

Mackenzie observed that the GIS is a fairly uniform way to identify low and very low income seniors in Canada.

Although, she noted, seniors who don’t quite meet the requirements to receive GIS aren’t going to be in much better shape financially than those who do.

But increasing the GIS, along with the scheduled increase to the OAS in July, could help some economically vulnerable seniors on fixed incomes meet rising costs during the pandemic.

“Given the circumstances of the day…it would be an effective way of getting some additional money to fairly low income seniors or those living at or below the income poverty line in Canada during some very uncertain times,” Mackenzie said.

When your scenery has

When your scenery has attracted millionaires, your area is no longer rural. It is priced to discourage others, even putting the servants into substandard housing. I got out of there during the Olympic Land Fever. Even living in town in a truly rural area, the pension makes me feel like a deputy elf.

Seniors (and others) who don

Seniors (and others) who don't qualify for govt. help in this crisis because their incomes are too high(!) should, at the very least make contributions to organizations whose mission includes services to, support of, those living below/at the poverty line. I'm middle income - my pensions supplement family income, I have to save up to make charitable donations. Just now, those are going to my local service/relief agencies - they often know very well those who need help the most.

PS this article is a fine dissection of the built-in systemic inequities of Canada's economy and governmental responses to the deliberate corporate/political efforts to further impoverish people of "no account". And it doesn't even address some of the least prosperous provinces, or the most conservative.