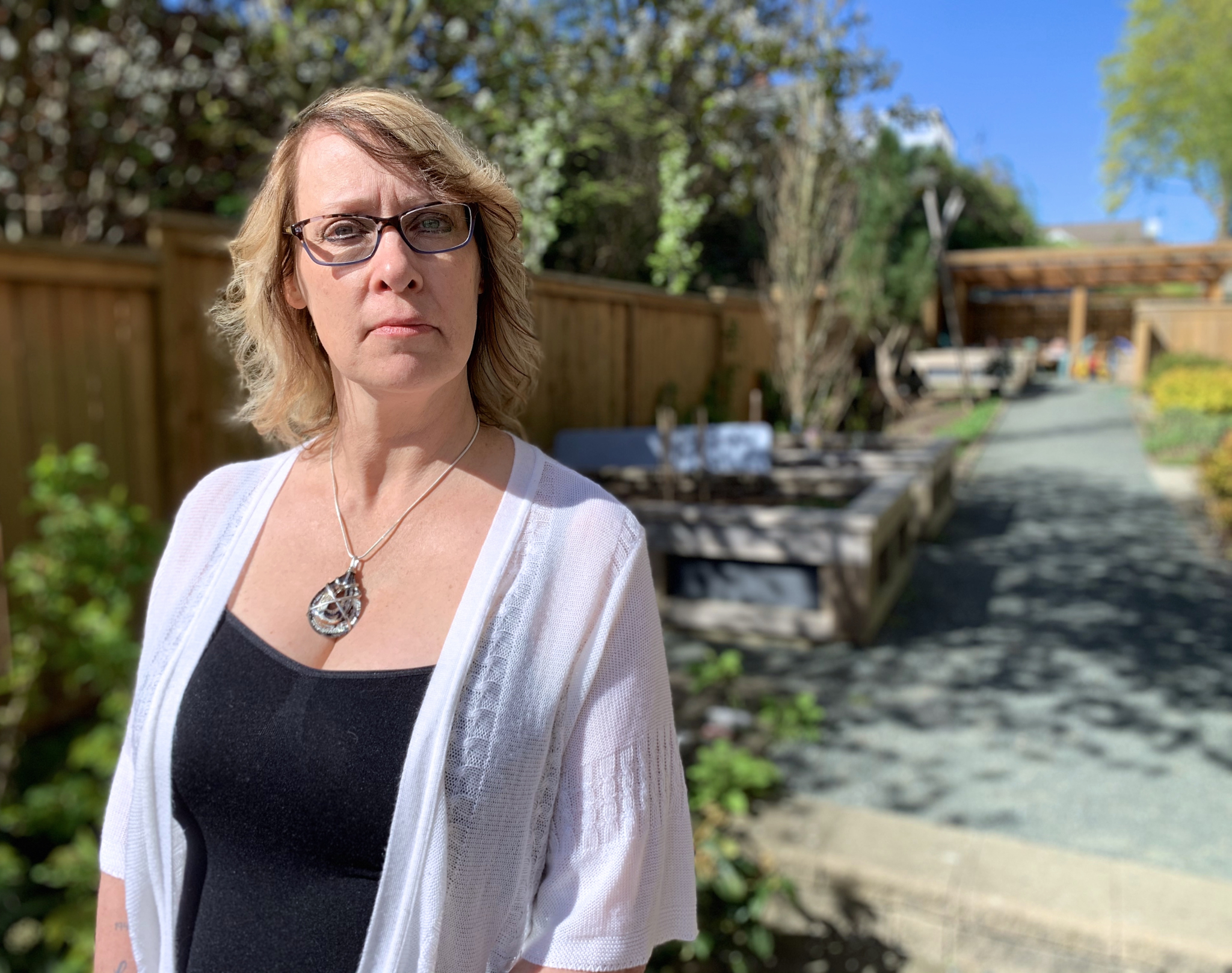 The danger to rural women facing violence is higher than ever due to the COVID-19 crisis, but the number of victims reaching out for support is not growing apace in the North Island region, troubling the agencies that help them.

Social-distancing measures during the pandemic can put women into even tighter quarters with their abuser, further limiting their ability to reach out for help, said Diane Palmer, of the Campbell River and North Island Transition Society (CRNITS).

“We’re actually seeing a decrease in calls to our 24-hour crisis line, and we have available beds right now,” Palmer said. “We feel women aren’t able talk on the phone safely, so it’s limiting some women from getting support.”

CRNITS not only serves Campbell River, but women and children at risk of violence in isolated rural communities across the North Island, including Cortes and Quadra islands.

Almost a third of police-reported violence happens between intimate partners, with women representing 80 per cent of the victims.

Intimate partner violence (IPV) is also the dominant form of violence experienced by women, representing 45 per cent of all female victims aged 15 to 89.

Historically, violence against women jumps when there is widespread societal distress, Palmer said.

“We don’t think the abuse is less, we think it’s probably increased,” she said. “When you see stressors like massive layoffs or natural disasters, and all those stressors are in play now, it gets worse. It’s just likely accessing services is more difficult for women.”

“It seems to be a similar trend on Vancouver Island that is not limited to Campbell River,” she said. “(COVID-19) seems to be having that effect in a broader area, as well.”

“Domestic violence isn’t less important under COVID-19. In fact, it is even heightened, but people need to reach out to police or a crisis line … when they are in a violent situation,” says RCMP domestic violence co-ordinator Const Julie Clelland.

The transition society is still providing urgent supports, such as crisis lines, one-on-one counselling over the phone and shelter services to help safeguard women from violence during the pandemic, Palmer said.

While group gatherings aren’t being offered at the moment, the women’s centre is still open to five women at a time Monday through Thursday, with food and poverty relief supplies available.

The recovery program at the Ann Elmore House is operating again, but at 50 per cent capacity.

In an effort to provide a safe and easily accessible tool for women in danger during the health crisis, the transition society has set up a new 24-hour text-only help line, Palmer said.

Generally, women in isolated rural areas face greater geographical challenges accessing services, and if they need transitional housing, they have to leave their community and go to Campbell River.

The women’s centre on Cortes Island — which is two ferry rides away from Campbell River — is still operational, but its safehouse operated in partnership with the society isn’t necessarily accessible during COVID-19 restrictions, Palmer said.

“It may look different, but we can still get women here and provide safe shelter in Ann Elmore House … police will help them get into town,” she said.

Women in rural, remote and northern communities are more vulnerable to gender-based violence (GBV), with Indigenous women, girls and LGBTQ2 people suffering the highest rates of violence, according to Status of Women Canada (SWC). Indigenous women experienced violence at a rate 2.7 times higher than that reported by non-Indigenous women, and were more than three times as likely to report spousal violence.

In general, women in rural areas experience the highest overall rates of intimate partner violence, with 789 victims per 100,000 population, versus an urban rate of 447 victims.

Of the 945 intimate partner homicides that occurred between 2008 and 2018, 79 per cent involved female victims.

An additional $10 million is slated for Indigenous Services Canada's (ISC) network of 46 emergency shelters on reserves and in the Yukon to support Indigenous women and children fleeing violence.

RCMP Cpl. Sean Bulford, Quadra Island detachment commander, said there hasn’t been an uptick in domestic abuse calls on Quadra and Cortes islands since the coronavirus isolation measures were put in place.

But that doesn’t mean women aren’t facing increased risk of violence on the islands, he said.

“Domestic violence is a very underreported crime. There are a lot of women, I suspect, that are living in abusive relationships, but we never get calls from them,” said Bulford.

“Just because we haven’t seen an increase, doesn’t mean it isn’t happening.”

The majority of gender-based violence cases are not reported to police, with just five per cent of sexual assault survivors reporting to police in 2014, according to Status of Women Canada.

Reasons why survivors of violence don’t report can include the belief the offender won’t be convicted or a lack of faith in police, not wanting their community of family to know or be shamed, financial dependence on the abuser or fear the abuser will enact revenge, or that they might lose their children or be deported.

Charges were forwarded to the Crown in five of the incidents, with insufficient evidence to proceed in the other one, he added.

To date in 2020, police have responded to five family or spousal disturbances that didn’t involve assaults on the islands.

The RCMP treats domestic assaults very seriously and strives to get charges if the evidence allows, said Bulford, adding he understands women being abused might be hesitant to call police.

“We encourage women to come forward to provide statements, but we realize it’s a step a lot of women aren’t prepared to take,” he said.

But if they aren’t comfortable reaching out to police, victims should confide in service providers or friends or family, Bulford said.

“The first step is to tell somebody they trust, so someone knows what they are living with,” he said. “It provides some measure of safety.”

Campbell River RCMP responded to 37 different domestic violence calls in March, an increase of three files compared to the same period in 2019.

“We’re not seeing a spike, but we can’t say for sure it isn’t happening,” Clelland said.

“Domestic violence isn’t less important under COVID-19. In fact, it is even heightened, but people need to reach out to police or a crisis line … when they are in a violent situation.”

Women living in rural or isolated communities, such as Quadra and Cortes islands, face added challenges in accessing services, programs or transition housing, which are mostly based in Campbell River.

“Unfortunately, they are looking at displacement from their community to get the resources that they require.”

Women fleeing violence on the islands who need long-term safe shelter face journeys involving one, if not two, ferries, and no public transit across the islands.

RCMP officers can help get women and children off island, but the police’s ability to respond to Cortes Island, only accessible by water from Quadra, in a timely manner is difficult, she said.

“Quadra and Cortes communities are tight-knit and always willing to help out, but everybody also knows your business.”

This can be particularly problematic when it comes to keeping the location of temporary safehouses secret.

But resources for women and children facing domestic abuse are in place during COVID-19’s self-isolation measures, Clelland said.

“We still want people to access them when they can, and police are still on the road answering calls.”

In terms of available resources, Palmer is particularly unnerved that there are safety beds available at the transition society’s Ann Elmore House, which is typically full.

“It’s an eerie, odd situation because we know women are likely facing more violence than usual,” she said, adding it’s likely a reflection of the drop in calls to the crisis line.

“But that could change any moment … we are expecting the bottom to drop out any minute.”

Palmer suspects a key reason women aren’t leaving dangerous homes is the dire lack of affordable rental housing, a problem that pre-dates COVID-19, but is further aggravated by the fact few buildings are taking in new tenants with the pandemic in full swing.

Additionally, BC Housing, the key source of subsidized housing for women and children fleeing violence across the province, has stopped accepting and processing housing registry applications during the pandemic, said Palmer.

“There’s lots of uncertainty right now in the housing market … women are scared of ending up homeless, and that’s a legitimate and definite concern.”

But the transition society is still providing critical services to women and children during the health crisis, Palmer stressed.

“We are still here,” she said. “We really want women to access our services. We’re still there for supports, even if they just want to talk to someone on the crisis line.”

If you are in immediate danger, call police at 911 right away.

Provincewide: Call VictimLinkBC at 1-800-563-0808 or email [email protected] for 24/7 confidential service, supports and translators in 150 languages.