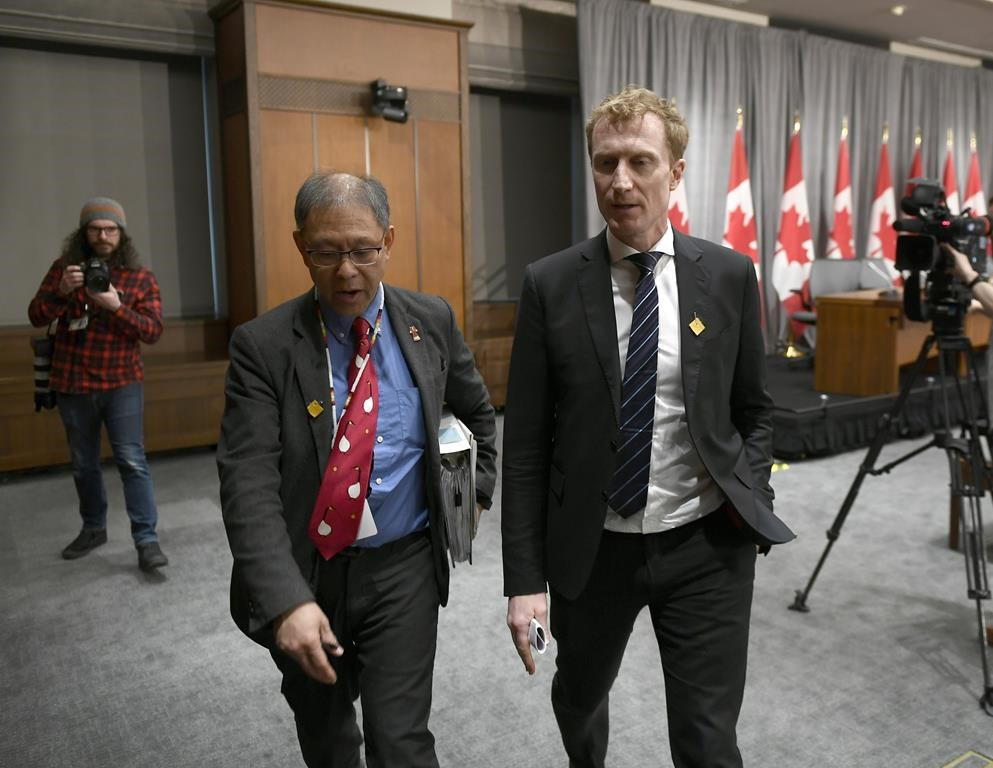 Dr. Tom Wong and Marc Miller leave a press conference on COVID-19 in West Block on Parliament Hill in Ottawa, on Mar. 19, 2020. File photo by The Canadian Press/Justin Tang
Previous story
Next story

Federal officials say the next two weeks will be crucial in trying to determine the scope and severity of the spread of COVID-19 in First Nations communities.

Cases of the virus have begun to present within Indigenous communities across Canada, including the first case in Nunavut — something health officials have been bracing for with concern, given the many vulnerabilities that exist among Indigenous populations.

Dr. Tom Wong, chief medical officer of public health at Indigenous Services Canada, says it's too early to determine the severity of these outbreaks and whether the situation will worsen.

He said health officials are closely monitoring the situations and have jumped into action where needed.

Indigenous Services Minister Marc Miller noted a particular concern over an outbreak in the Dene village of La Loche, about 600 kilometres northwest of Saskatoon.

Conservative MP Gary Vidal, who represents the northern Saskatchewan riding where the village is located, said his concern is personal.

"This is my hometown, this is my area. These are families and kids that I coached in hockey and they're all friends and connections, so this has become very personal for me suddenly," Vidal told Miller during a House of Commons committee meeting Friday.

He noted the outbreak includes the deaths of two elders living in a care facility and that there are now also active cases in the neighbouring First Nation communities of English River and Clearwater River Dene.

"It's too late for reactive measures, now is the time for a major proactive response from (Indigenous Services Canada) in northern Saskatchewan. This has become a very dangerous situation," Vidal said.

Miller acknowledged he is "very worried" about this outbreak, and that his department has been working with the province and the Northern Inter-Tribal Health Authority to ensure a co-ordinated effort. Health Canada is mobilizing testing capacity, planning to ship personal protective equipment and sending in additional health professionals and medical officers.

As of April 30, there were 131 active cases of COVID-19 in a total of 23 Indigenous communities across Canada, and federal officials are working closely with First Nations leaders, provinces and territories to help slow the spread of the virus.

Some of these outbreaks have been traced to workplaces. This includes an outbreak of COVID-19 at a meat-packing plant in Alberta, which has been identified as the source of new cases in the nearby Stoney Nakoda First Nation, west of Calgary, Wong said.

Health officials are once again stressing the importance of physical distancing and handwashing, and will be watching closely over the next two weeks in the hopes they see the current rise in cases on First Nations begin to curve downward, Wong said.

Meanwhile, Miller says the $15 million in COVID-19 emergency funding earmarked to help organizations that service Indigenous urban populations is not "not enough."

Miller told the committee Friday his department received far more applications to this fund than the 94 proposals that have been approved.

He is now working to secure additional funds to help the vulnerable populations that friendship centres and other urban Indigenous organizations work to support every day.

"I will acknowledge that it is not enough and we are working more to serve these people in very vulnerable situations, and that's work we will continue to do," Miller said.

Last month, the National Association of Friendship Centres said their facilities across the country have been on the front lines of the crisis and have been inundated with requests for help as their communities struggle to cope.

The centres have been struggling to function without additional funds from the federal government as they work to meet an increased demand in services, the association said.