By Colette Derworiz | News, Politics
#490 of 1456 articles from the Special Report: Coronavirus in Canada 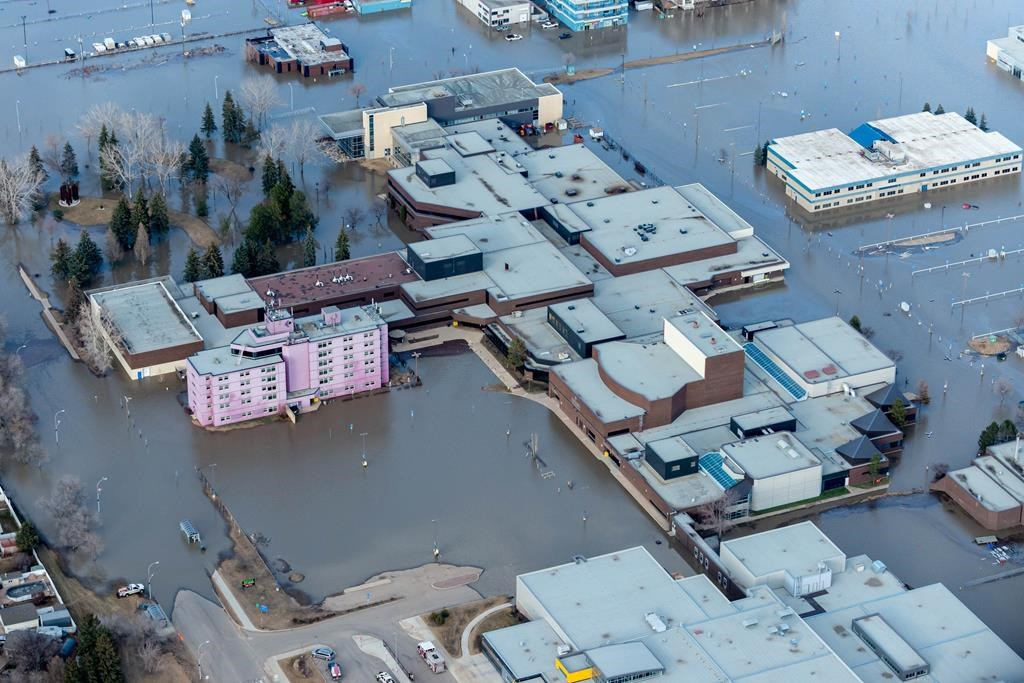 The flooded Syncrude Sport and Wellness Centre on the Keyano College campus in downtown Fort McMurray is shown on Tuesday, April 28, 2020. File photo by The Canadian Press/Greg Halinda
Previous story
Next story

The mayor of a northern Alberta city hit hard by flooding says he will seek disaster aid from higher levels of government while residents have been told they may need to boil their tap water for months.

Don Scott, mayor of the Regional Municipality of Wood Buffalo, said he spent the weekend walking around downtown Fort McMurray as evacuation orders were lifted and about 13,000 residents were allowed to return to their homes.

"I have first-hand seen the heartbreak that people are going through and the devastation that was caused by this flood," he said Monday.

"This community needs help. We are going to need provincial help ... and, if possible, we would like to see the federal government top up any provincial assistance, because the devastation is pretty significant."

Alberta Municipal Affairs said in a statement that the government would consider the request.

"Premier (Jason) Kenney has stated that the flooding situation in northern Alberta will likely meet the eligibility for a Disaster Recovery Program as a one-in-100-year flood event," press secretary Timothy Gerwing wrote in an email.

"Details of any potential Disaster Recovery Program would have to be voted on by cabinet before they could be made public, but the government recognizes the urgent need for relief."

Once the province makes a decision, there's a cost-sharing formula that determines how much the federal government would contribute in post-disaster assistance.

All mandatory evacuation orders were lifted in the regional municipality, which includes Fort McMurray, by 6 p.m. Sunday.

"We are now fully in recovery phase," said Scott Davis, the municipality's director of emergency management.

The final evacuation order ended as Fort McMurray marked the anniversary of a raging fire that emptied the northern city four years ago.

The latest disaster was the result of a 25-kilometre-long ice jam on the Athabasca River, which caused water levels to rise in several low-lying areas along the Athabasca and Clearwater rivers — including downtown Fort McMurray.

Residents returned to soaked walls and muddy basements on the weekend. Some of the homes won't be habitable because of water damage and the mayor said many residents don't have insurance.

"There is a huge issue in this region," said Scott.

Officials said the boil water advisory brought in during the flooding could remain in effect until September for all neighbourhoods in Fort McMurray, Anzac, Draper, Gregoire Lake Estates and Saprae Creek Estates.

Matthew Hough, deputy chief administration officer, said the plant is physically safe, but the river water went the wrong way down an overflow pipe and mixed with the city's drinking water.

"We are now required to clean all 375 kilometres of our pipes and that is going to take time," he explained. "The river water has created a film-like substance on the inside of our pipes."

Hough said all the pipes will have to be cleaned with safe levels of chlorine before the advisory can be lifted.

"I would like to welcome you back home. I can only imagine how difficult this has been and I understand that many challenges will remain in the days to follow," Reeve Josh Knelsen said in a post on social media.

A blockage on the Peace River caused the flooding in Fort Vermilion and left large chunks of ice on the streets.

"This flood was unprecedented, many of us have never witnessed a natural disaster of this scale in our lifetimes," said Knelsen.

Members of the Little Red River Cree Nation at Garden River, which is also near the Peace River, were still under an evacuation alert Monday, an Alberta government website indicated.

The province has said residents of northern Alberta forced from their homes due to flooding will receive emergency payments. Evacuees can apply for $1,250 for each adult and $500 for each child.

Officials said that program will cost about $11.7 million for one week.

This report by The Canadian Press was first published May 4, 2020

By The Canadian Press | News, Politics | May 4th 2020
Race Against Climate Change