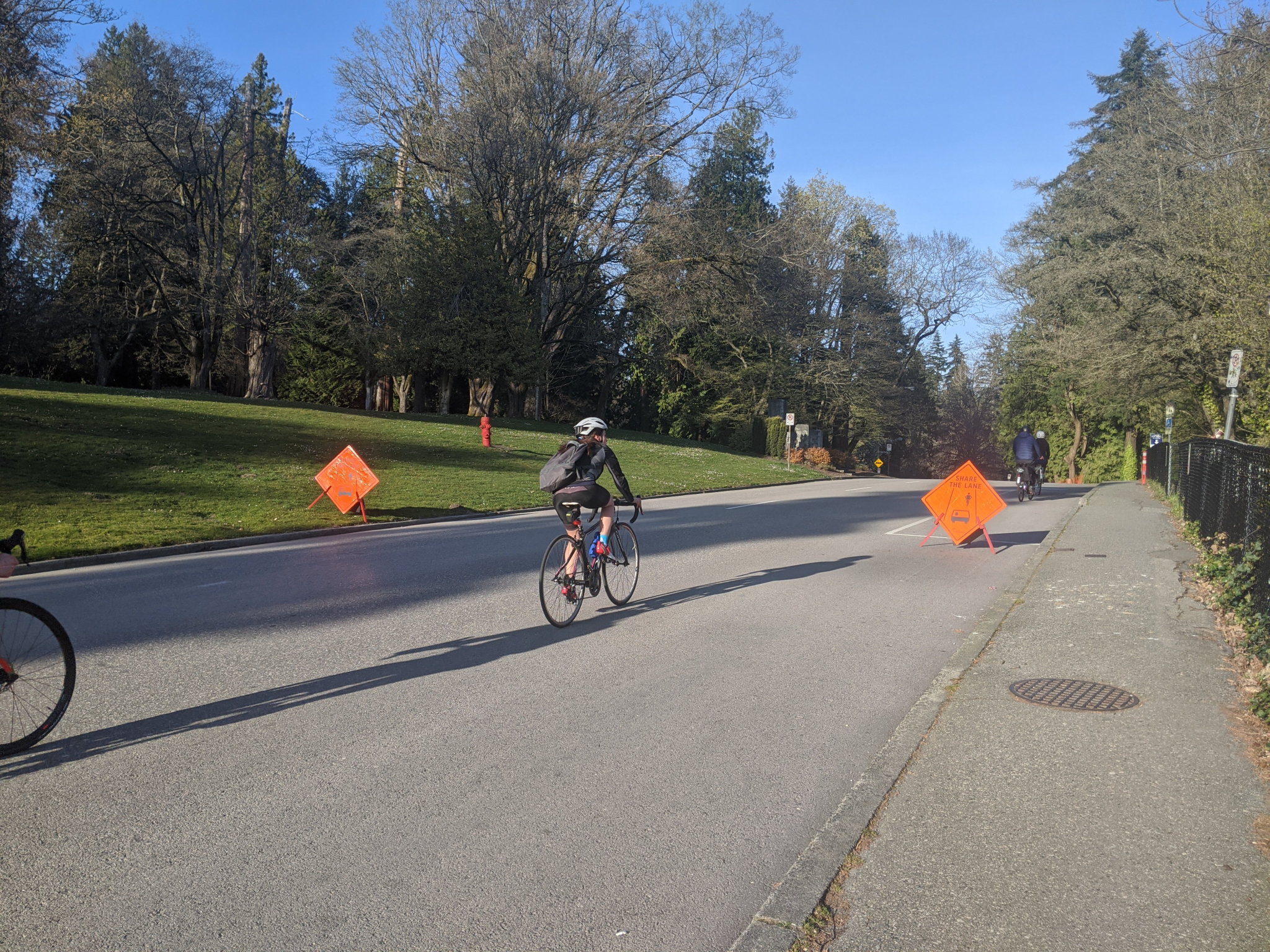 Cyclists on a road in Stanley Park in Vancouver closed to vehicle traffic. Vancouver Park Board Twitter photo
Previous story
Next story

More Canadians are working from home, ordering online and practising physical distancing outdoors, and a cross-country network of scholars wants to take advantage of that to “future-proof” a post-pandemic recovery from the climate crisis.

A group of 50 academics, formed out of the Canadian research team Sustainable Canada Dialogues, says it sent an open letter to Prime Minister Justin Trudeau and three ministers on May 7 that sets forth “key principles” for any coronavirus recovery plan so that it will be both “health-enhancing” and economically resilient.

“I think citizens are experiencing a lot of hardship, and there will be more economic hardship in the next few years,” said Catherine Potvin, Canada Research Chair in Climate Change Mitigation and Tropical Forest, and a biology professor at McGill University, who organized the initiative.

“We wouldn’t want that to be compounded by additional climactic hardship. You’re taking a population that’s been suffering this year, and then you don’t want to put that population more at risk. So it’s future-proofing Canada.”

COVID-19 has forced a shift in how many Canadians live and work, and the measures adopted by provinces and territories to slow the spread of the virus are also “opening new investment opportunities serving health and environmental goals,” the letter states.

For instance, there are reports about evidence of an explosion in online ordering, as many storefronts have closed and Canadians are urged to stay home as much as possible. This has led to stories about Canada Post reporting “Christmas-level” parcel volumes. It’s an opportunity to change for the better how Canadians get their goods delivered, the group said.

Even before the pandemic, transportation represented the second-largest share of Canada’s carbon pollution profile, according to Environment and Climate Change Canada's National Inventory Report, not far behind the oil and gas industry. Pollution from driving jumped by six million tonnes of greenhouse gas equivalent from 2017 to 2018, the most recent year figures are available.

Canada Post has committed to buying hybrid vehicles, but in March, Julee Sanderson, first national vice-president at the Canadian Union of Postal Workers, told National Observer that the union had developed a plan that envisions “climate-friendly delivery,” including a fleet of fully electric vehicles.

The letter also notes that some cities have temporarily closed streets to traffic to allow for better physical distancing. Vancouver, for example, closed the eastbound lanes of Beach Avenue and roads within Stanley Park, making pedestrian access to the seawall easier, while Ottawa has closed Queen Elizabeth Driveway, allowing a wider space along the Rideau Canal.

Meanwhile, many indoor gyms across the country have closed to stop the spread of COVID-19. Fraser Health and Interior Health have ordered fitness facilities in those regions to close, while the GoodLife Fitness chain closed all locations across Canada.

More Canadians are working from home, ordering online and practicing physical distancing outdoors, and a cross-country network of scholars wants to take advantage of that to “future-proof” a post-pandemic recovery from the climate crisis.

“The recovery is thus a great time to fund complete streets and roads, with wide sidewalks, green infrastructure and bicycle lanes,” reads the letter. It said this will allow for more outdoor mobility, like walking, cycling, jogging or rollerskating, allowing people to be healthy and active while still respecting physical distancing.

Universal access to high-speed internet, too, is now a “necessity,” the letter states, with 4.7 million Canadians now working from home as a result of the pandemic who wouldn’t normally be doing so, according to a Statistics Canada survey.

Potvin said the group has been discussing the issue for several weeks as a way to provide friendly advice to the government. But she said the conversation was invigorated with the news last month that Infrastructure Minister Catherine McKenna was preparing to launch unspent infrastructure funds to stimulate the economy with smaller, “shovel ready” projects.

The letter points to the government’s “climate lens” at Infrastructure Canada — meant to apply “climate impacts into the planning of infrastructure projects” in order to help Canada achieve its goal of net-zero carbon pollution by 2050 — as a good place to leverage existing programs.

McKenna’s director of communications David Taylor said the minister would have to review the letter before responding.

The scholars also pointed to other “no-regrets investment,” such as accelerating the transition to renewable energy sources, boosting green spaces like wetlands and conservation areas, launching a national home energy retrofit program, and creating a “climate-literate construction workforce” versed in low-carbon construction techniques.

“If climate literacy is an integral part of workers’ training, the industry can establish new skill requirements to ensure that newly trained workers can find the good-quality jobs they expect and have the capacity to effectively contribute to Canada’s climate objectives,” reads the letter.

These priorities were informed by Sustainable Canada Dialogues’ previous work on energy transition, said Potvin. During the 2015 federal election, the group pushed for a “national dialogue on climate change policy.”

“We look at what are investment possibilities that would sustain more employment, because that’s what people need now, they need to work,” said Potvin.

“This seems to be a really good time where we can upskill workers, construction workers, because it’s quite obvious that we will never be able to reach the level of building retrofits we need unless we train the people to do that.”

The group also says that as a general rule, investments should include “principles of equity, diversity and inclusion and be consistent with Indigenous rights” so as not to further exacerbate the social inequalities that COVID-19 has already highlighted.

Editor's note: This story was updated on May 8, 2020 at 10:24 a.m. to remove a reference to "Canada’s postal union" as it could have been wrongly interpreted to mean that there is only one such union in Canada. There is also, for example, the Canadian Postmasters and Assistants Association.

The ’calls’ for some kind of

The ’calls’ for some kind of reset as a response to the disruption of Covid19 will only intensify as the pandemic diminishes. We can expect ’calls’ from all kinds of interest groups. This is normally the realm of the well funded lobby machine representing corporate interests, although there are others as well. Wouldn’t it make sense to have something like Citizens Assemblies from local to provincial and finally national levels to inform not just governments but also, ourselves, about what this future might look like? Participation would require a commitment to listen to each other.