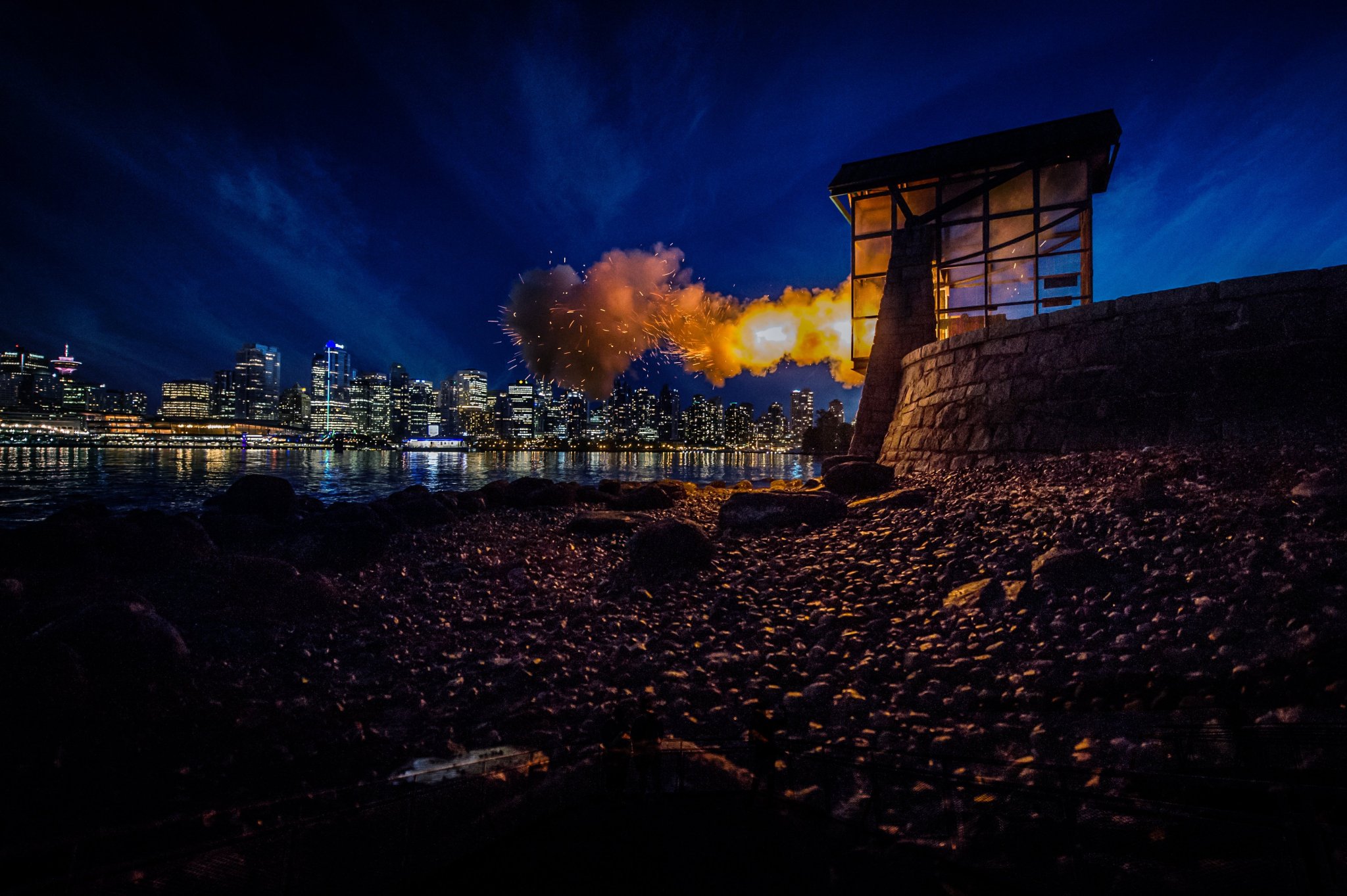 The Nine O’Clock Gun fires in Stanley Park in Vancouver in 2016. Conservative MP Blaine Calkins has questioned whether the naval cannon, used to mark the time, would be included in the new prohibitions. Photo courtesy Mark Teasdale
Previous story
Next story

B.C. gun groups say they don’t know who to trust after the federal government’s new prohibitions led to confusion over the status of some firearms and prompted the RCMP to spell out its views.

“I think we have to let a judge decide, don’t we?” Douglas Bancroft, president of the Victoria Fish and Game Protective Association, told National Observer.

The 64-year-old Bancroft says he has notified the membership of his club, which counts over 4,000 active members, that the staff at the gun range northwest of the capital are there primarily to enforce safety rules — not to interpret regulations.

“They’re not there to look at your firearm and try to figure out whether or not you’re allowed to have it there,” he said.

One clause bans any firearm with the gun barrel’s inner diameter, or bore, greater than 20 millimetres, while another bans any firearm “capable” of discharging a projectile over a specified level of muzzle energy. The two clauses have limited exceptions, such as for bomb disposal.

Their general applicability has sparked confusion over what types of guns are now prohibited. It has even led to questions about whether it would include the Nine O’Clock Gun, the antique naval cannon in Vancouver's Stanley Park.

On May 4, the Canadian Sporting Arms and Ammunition Association (CSAAA) published a legal opinion saying that a common gun used in hunting and trap and skeet shooting, the 12-gauge shotgun, would be included in the diameter ban.

The CSAAA estimated there are between 1.5 million and two million of these guns in circulation in Canada. It said the regulation could cover almost every modern version, with removable chokes, or the constriction at the end of the muzzle that’s used to change its performance.

Federal Public Safety Minister Bill Blair tweeted the next day, May 5, that both 10- and 12-gauge shotguns should not be subject to the prohibition because they would be under the diameter ban. But that didn’t immediately clarify whether the measurement would include the choke.

The issue prompted the RCMP’s Canadian Firearms Program to issue a statement of its own on May 8. The RCMP said it was the program’s “view” that the regulations should be read “in accordance with acceptable firearms industry standards for shotguns, where they said the bore diameter is measured before the choke.

Even so, that hasn’t stopped more questions from being raised. On May 13, another organization, the Canadian Shooting Sports Association, issued another legal opinion on the second clause relating to muzzle energy.

The group pointed to an experiment showing a modified 12-gauge shotgun is “capable” of breaching the new rule. Meanwhile, a third group, the Canadian Coalition for Firearms Rights, says it has launched a constitutional challenge.

Chuck Zuckerman, vice-president of the Surrey-based BC Wildlife Federation, told National Observer that the RCMP’s statement didn’t convince him that the issue had been resolved.

“Tweets and news conferences do not change the law,” he said. “Who are we to believe? The law? Different authorities’ different interpretations of the law? ... Confusion rules the day.”

B.C. gun groups say they don’t know who to trust, and are waiting for the courts to clear the air, after the federal government’s new prohibitions led to confusion over the status of some firearms and prompted the RCMP to spell out their own views.

Bancroft said he has been doing 3 Gun, a shooting sport where competitors run through staged areas and fire at targets, for about eight years. He said he lost faith in the process after the government portrayed his AR-15 as something meant only for soldiers.

If these guns were not meant for sports, he said, then “why was I issued that authority (by the RCMP) to transport that firearm for competitive sports all those years?”

On Wednesday, Conservative MP Blaine Calkins, the MP for Red Deer-Lacombe, asked Blair during a Parliament Hill meeting of the special committee on COVID-19 whether the new prohibitions would include the Nine O’Clock Gun.

The cannon is now used to signal the time and is usually fired every day at 9 p.m. Throughout April, it fired two hours earlier, in solidarity with the daily cheer in support of local health-care workers fighting the pandemic.

“Can the minister advise the public of the safety risks that this cannon — which was manufactured in 1816 — poses to the public?” asked Calkins.

Blair responded that he assumed the member was referring to the prohibition of grenade launchers. A variety of anti-tank weapons, rocket launchers and other high-powered guns are included in the two general clauses on energy and bore diameter.

“Let us be very clear: We have prohibited weapons that were unfortunately widely available in Canada and were being used for purposes not for sporting — which is the only use of firearm in Canada, for either hunting or target shooting sporting activities — but were rather being used to harm individual Canadians, and in some tragic cases, many individual Canadians,” said Blair.

The Nine O’Clock Gun is still firing, said Vancouver Park Board senior communications co-ordinator Daria Wojnarski in response to questions. She said park board staff were looking into the issue.

The new rules include a two-year amnesty period for owners of banned weapons to protect them from criminal liability until April 30, 2022, Wojnarski also noted.

I do hope that gun ownership

I do hope that gun ownership proponents in Canada will not descend to the depths of the mass hysteria exhibited by American gun owners.

Canada has, up to now, been spared (mostly) the tragedies of mass shootings of innocent civilians (For purposes of this modern argument I exclude the indigenous/metis experiences). The recent murderous spree in Nova Scotia, has brought to bear the expected political reaction. That reaction need not have occurred had Canadian gun owners not pressured the governments to lift bans on assault style weapons. Despite the claim that assault style weaponry can be a legitimate "sport" one wonders why this sport did not take hold prior to the advent of rapid fire assault weapons. Probably because the single shot, or biathlete target shooting norms did not provide sufficient macho thrills.

My lungs contract at the thought that such a sport could take hold in populated rural areas which might indeed be endangered by the range and power of such weapons and the lethality of the bullets they commonly employ. What, if any, regulations apply to the locations, the safety precautions, of such installations? What type of liability insurance are they required to maintain?

But, in the final analysis, the very existence of such a "sport" seems only to serve as an argument for the continued civilian right to own and use such powerful weapons. Sports can be outlawed if they endanger human life. Modern sports that result in concussions and other insidious injury are good candidates for extinction.

Rome's gladiatorial sacrificial sports were powerful symptoms of a society in steep decline.

When the Government announced

When the Government announced a ban on military style guns, I immediately wondered if they would also ban video games featuring killings with such weapons. These games are a training ground for violent behaviour. Life has no value in these games. Although most Canadians, and probably even attack gun owners, reject the American trigger-happy culture, we are gradually led down that path by transforming killing into a game, even if only on the computer. How far down can we go?
Surely, we are sufficiently resourceful in Canada to invent games that call for other abilities than killing skill.