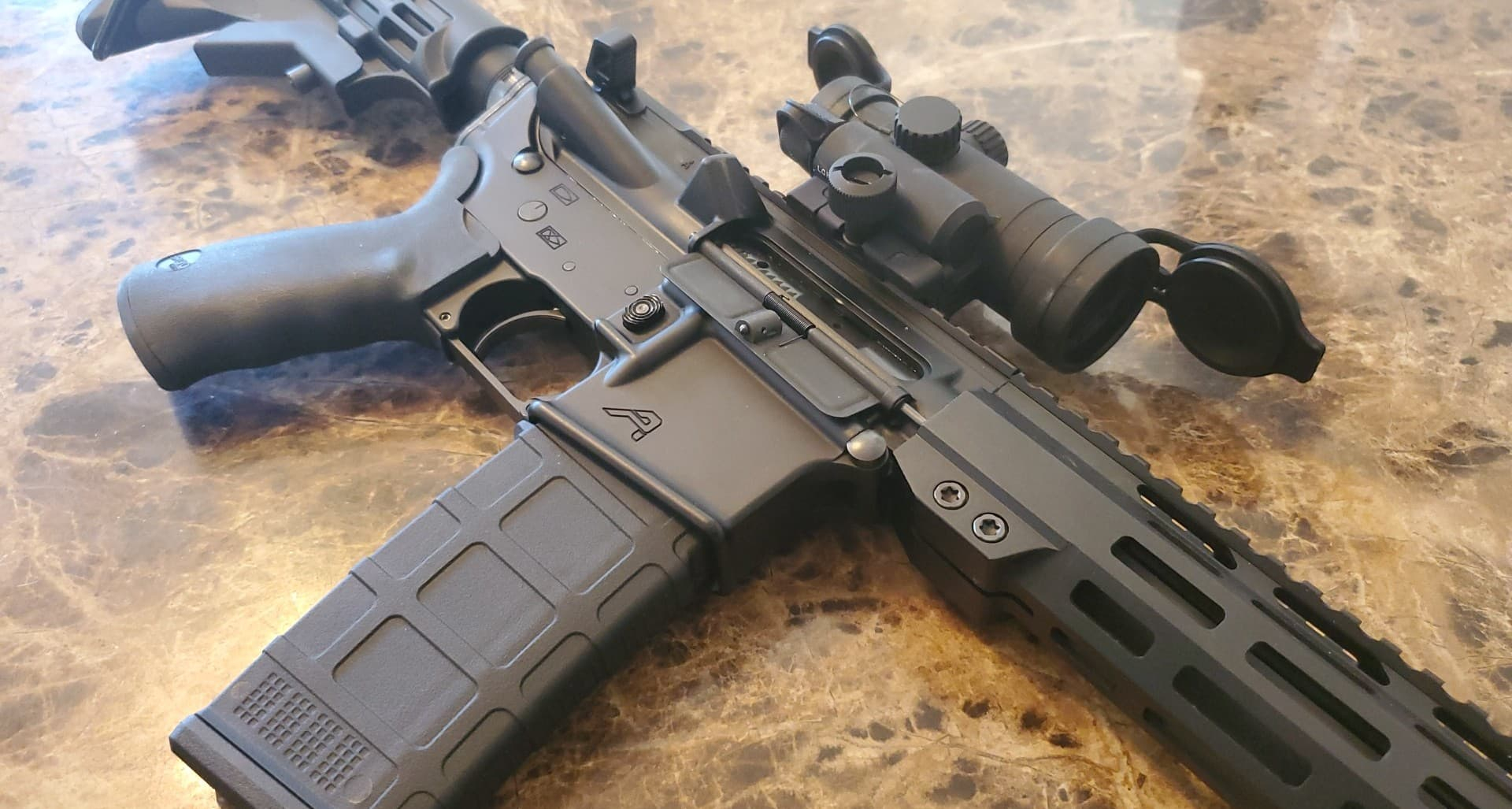 An Aero Precision X15, one of the guns with an AR-15-type design that was banned for use, sale, purchase or transport on Friday. National Observer photo
Previous story
Next story

Prime Minister Justin Trudeau's immediate ban on “assault-style” firearms is being praised by a Vancouver-based anti-violence group as a “long overdue” step that will help save potential victims, but denounced by gun clubs in Abbotsford and Prince George as a “disgusting,” wrong-headed approach to public safety.

Trudeau unveiled cabinet orders on Friday prohibiting approximately 1,500 types of guns, including future variants, as well as other gun components. The federal government tied the policy shift to a range of incentives, from cracking down on “gun violence” to ending the “militarization” of society to enacting “feminist” ideas.

“With each passing year, more families are ripped apart by tragedy. More parents are struggling to explain the inexplicable to their kids and more teenagers are growing up in a world where gun violence is normalized,” Trudeau said during a press conference in Ottawa. “It needs to stop.”

Licensed owners of the banned guns will no longer be able to use them, whether that be for hunting, shooting sports, target practice at a gun range or selling or transferring to another owner. There is an exception in the new rules for Indigenous people exercising their constitutional hunting rights, as well as for those who hunt for food.

The government put in place a two-year amnesty period for owners of the newly banned guns to protect them from criminal liability until April 30, 2022, and is promising to table legislation in the future to implement a buyback program.

‘This is a long time coming’

For Tracy Porteous, executive director of the Ending Violence Association of British Columbia, “this is a long time coming.”

Porteous said one of the top risk factors identified by the B.C. coroner during its investigations into domestic violence has been access to weapons, and a quarter of all domestic-violence homicides are committed using guns.

“So there's a direct and dangerous correlation between domestic violence and gun violence,” Porteous said.

Trudeau's move to immediately ban 'assault-style' firearms is being praised by a Vancouver-based anti-violence group as a long overdue step but denounced by hunting and fishing clubs as a wrongheaded approach to public safety.

“This big step in nationwide gun control is long overdue, and hopefully will foster an atmosphere here in B.C. that will help keep potential victims of gender-based violence out of harm’s way."

In his remarks, Trudeau raised the spectre of mass shootings, such as at École Polytechnique in 1989 when 14 women were killed; at a Quebec City mosque in 2017 where six were killed; and last week in Nova Scotia, in the deadliest mass shooting in Canada’s history, leaving 22 people dead.

Porteous also noted the Nova Scotia and École Polytechnique shootings, saying “any gun-control efforts are important steps toward lowering the rate of gender-based violence, both provincially and federally.”

Deputy Prime Minister Chrystia Freeland said that during the coronavirus pandemic, there has been a rise in gender-based and domestic violence, including a 300 per cent rise in calls to B.C.’s Battered Women's Support Services. “In saying no to assault-style weapons, we are putting feminist ideas into practice,” she said.

‘Clubs are members of the community’

For Andrew Tomlinson, president of the Prince George Rod and Gun Club, the new rules make no sense.

He said the list of banned guns “has been built with emotion” and focuses government energy on the types of guns that people own, and on legal gun owners, rather than targeting crime or bolstering mental-health support.

“This call for a ban now comes when many owners are already feeling the economic impact of COVID-19, and now may face having thousands of dollars worth of legally bought and taxed property taken from them and the loss of their sports,” he said.

“Gun clubs will also feel the burden and memberships will decline. Clubs are members of the community, often sponsoring youth programs (and) scholarships, and host training for police and other groups.”

Robert Engh, president of the Abbotsford Fish and Game Club, said the government’s ban will needlessly impact the fast-growing sport of practical shooting, organized under the International Practical Shooting Confederation.

He said his club has gone from fewer than 300 members a decade ago to more than 2,600 people now, and most of that growth is connected with shooting sports. The Abbotsford club holds regular events “with zero negative consequences on the general public,” he said.

As well, while civilians, military and ex-military people also compete in matches called “service rifle” that Engh said have been going on for 100 years, Friday’s ban makes civilian participation impossible.

“To say this is disgusting is an understatement,” Engh said. “That they would use (a cabinet order) is even worse, and to do it during the COVID-19 pandemic worse again.”

The full list of banned guns was printed in the Canada Gazette, the government’s official publication. It includes hundreds of versions of rifles based on the M16, AR-10, AR-15 and M4 models, as well as variants of the SG-550 rifle and SG-551 carbine, the Ruger Mini-14, the Vz58, CZ Scorpion, Cx4 Storm, SIG MCX carbine and others.

The term “assault-style firearm” is used in the government regulations, although it is a term generally not used by gun manufacturers.

Public Safety Minister Bill Blair said police chiefs and victims’ families have been calling for a ban “for decades” and declared that the list of banned guns “belong on a battlefield and not on our streets.” He said the government was “ending the proliferation of these weapons and the militarization of our society.”

He gave a nod to “hunters and farmers and target shooters,” saying “nothing that we are doing today or will do in the future is intended to interfere with this lawful, responsible and legal activity.”

However, he argued the banned guns serve no civilian purpose — and noted the two long guns involved in the Nova Scotia shooting were included on the list of banned weapons Friday.

But Tomlinson pointed out that investigators have so far suggested the Nova Scotia shooter was unlicensed and illegally obtained his weapons almost entirely from the United States.

“The terminology used by the government that all these guns are designed to kill the most people in the shortest amount of time is simply inflammatory, and lacks any fact- or science-based rationale,” Tomlinson said.

Trudeau similarly said the vast majority of gun owners use them safely and responsibly. “But,” he added, “you don’t need an AR-15 to bring down a deer.”

Engh said that was misleading as the government has already banned those from hunting. But he added many people, including about 75 at his club, use another newly banned gun, the STAG-10, based on the AR-10 rifle, for hunting.

“Ultimately, licensed owners are again being targeted as low-hanging fruit, rather than government investing in real solutions,” said Tomlinson.

There is no useful

There is no useful justification for permitting assault weapons in our society. Hunters can carry out their practices with bolt action small capacity clip fed long guns that have been duly registered by owners that have been trained in safe usage. This is the reasonable accommodation a society can make to shooters knowing full well that even those weapons can be abused.

The only criticism I would make is that this does not deal with hand weapons, and the removal of all unregistered and illegal weapons, and mandatory registration.

Hunters can convert to

Hunters can convert to shooting with a Nikon. "Sport hunting" animals like moose and bears is not a sport. It's a power game by an extreme minority who have insecurity issues and an idiotic need to act out by killing things. Photographs alone are worth it, and there is a much larger tourist industry to be developed around it than any specious economic argument hunters tend to issue in justification for killing for the sake of killing, or using AR-15s to nonsensically pump their pro-hunting lifestyle.

Or they can emigrate to

Or they can emigrate to Michigan where they would be free to enforce their will on elected representatives of the citizenry....I for one would say bon voyage!

Automatic weapon are not

Automatic weapon are not suitable for hunting (unless you're hunting humans). If there are people who want to shoot such weapons, they should join the army.

Satisfying solutions to complex problems don't usually come when emotions are heated. I hope the Liberals have thought this through properly this time because the previous regulations were a Christmas gift to Conservative fund-raisers.

On the other hand, firearm enthusiasts should propose rules that deal with the problem of war weapons available to society in a way that would be satisfactory to them. We need to solve this reasonably to avoid this issue becoming (or remaining) a "culture war" rallying point.

The gun club lobby is a very

The gun club lobby is a very small group so not representative of that many people. There will be some who will try to make this a wedge issue to rally the moribund Conservative Party. Let’s stay the course. With a clear law there can be enforcement at the border where these weapons originate.