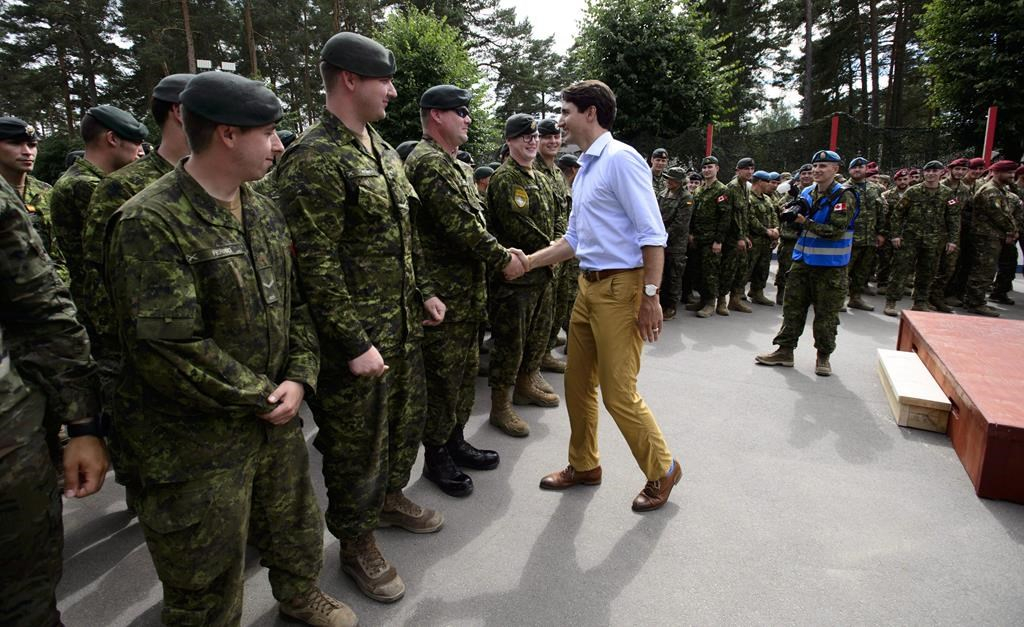 Prime Minister Justin Trudeau shakes hands with Canadian troops after delivering a speech at the Adazi Military Base in Kadaga, Latvia, on July 10, 2018. File photo by The Canadian Press/Sean Kilpatrick
Previous story
Next story

On a recent day in Latvia, a group of Canadian soldiers left a military base near the capital city of Riga. The column drove about 30 kilometres where they set up and, at one point over the next couple of days, fought back a simulated attack before packing up and returning home.

While a staple of Canadian military training in normal times, this particular exercise was unusual in that most other activities by the Canadian Armed Forces at home and abroad have been suspended or scaled way back in recent months because of COVID-19.

In fact, everything about Canada's three-year-old mission in Latvia is unusual these days, in part because little has actually changed.

Those on the front lines say that is a reflection of how the purpose of the mission — defending eastern Europe from Russian aggression — remains arguably more relevant than ever due to fears Moscow might try to take advantage of the pandemic to advance its own agenda.

"It is very important to keep that presence because we have not seen any scaling back of Russian forces," Latvian Foreign Minister Edgars Rinkevics said in an interview with The Canadian Press.

"There is still an ongoing situation. Yes, it is probably not as tense as it used to be. ... But at the same time we are in a situation where we shouldn't relax and we shouldn't get complacent. That is something that the alliance understands and our Canadian friends understand."

Canada has 540 troops in Latvia, where they form the core of a 1,500-strong multinational battlegroup established by the NATO military alliance three years ago. Similar battlegroups led by Britain, Germany and the U.S. have been established in Estonia, Lithuania and Poland, respectively.

The battlegroups were created after Russia annexed Crimea from Ukraine in 2014 and began to support separatist forces in Ukraine's eastern regions. That sparked concerns the Kremlin could launch similar efforts against the Baltics and other parts of eastern Europe.

The battlegroups are designed to defend against a Russian invasion, but their small size means they would almost certainly be overwhelmed in a real war. Instead, their main utility is to deter against Russian aggression, with the idea that an attack on one would draw in all of NATO.

The COVID-19 pandemic has forced the Canadian Armed Forces to suspend or scale back its operations around the world, including in Ukraine and Iraq where the military has been training local forces. Thousands of military personnel have been told to stay home in Canada.

At the same time, Canadian military commanders warned early in the pandemic that potential adversaries might try to take advantage of COVID-19 by striking while governments around the world are distracted by the pandemic.

The Canadian-led battlegroup in Latvia has been forced to adjust some of its practices because of COVID-19 as well. Those include more physical distancing, handwashing and having 60 soldiers go through their base, Camp Adazi, disinfecting surfaces every two hours.

Large gatherings such as military parades have also been suspended, while training exercises that once saw Canadian troops and other members of the NATO battlegroup interact with the local population now steer clear of the public.

"But we are getting out," said Col. Eric Laforest, the commander of the battlegroup, which includes troops from eight other NATO nations. "Training keeps on going as you would suspect with the full battlegroup of nine nations and the training just goes as planned.

Commanders have also decided to go ahead with plans to replace the Canadian troops currently in Latvia with a new contingent in mid-July. Unlike in Ukraine, where a small force is holding the fort until COVID-19 ends, there are no plans to scale back the Latvia mission.

"It was clear from my point of view as a commander here that we couldn't change our format," Laforest said in an interview.

"We put proposals back to Ottawa about what a modified mission could look like, but those were dismissed very rapidly. Everyone realized this mission is different and we are here for the long run and we can actually sustain the operation despite this COVID-constrained environment."

That decision has been welcomed by the Latvian government, which is worried about the message a reduction would send to Russia.

"It is very important that there is no change to the size of the Canadian-led battlegroup because that would create the impression our alliance is changing its policy," Rinkevics said. "That could leave the impression that (Russia) can try to test our borders one more time."

Canada has committed to leading the battlegroup in Latvia until at least March 2023.

NATO and European officials have accused Russia of testing the military alliance's readiness during COVID-19, particularly during the early days of the pandemic when the country had only a small number of positive cases.

British warships shadowed seven Russian vessels as they transitted the English Channel and North Sea in March. NATO intercepted several Russian military aircraft as they approached allied airspace. There have also been reports of an uptick in Russian misinformation.

Yet Russia has since been hit hard by COVID-19, with more than 300,000 positive cases. That represents the second highest number of cases in one country after the United States. Nearly 3,000 people in Russia have died from the respiratory illness.

Rinkevics nonetheless emphasized the importance of maintaining the battlegroup, particularly as Russia has continued to conduct exercises on its side of the border with Latvia despite COVID-19.

"It is very important to keep that presence because we have not seen any scaling back of Russian forces," he said. "We are not out of the woods at all."