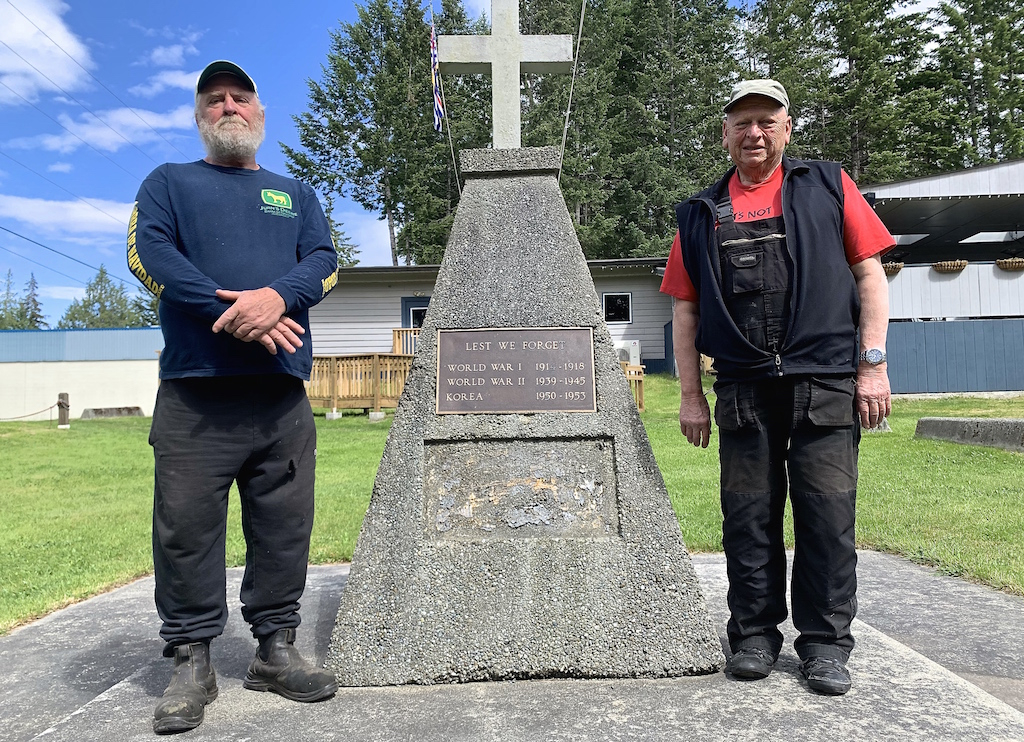 Tom Vaniderstine and Frank Schwagly, current and past presidents of the Quadra Legion, stand next to the cenotaph that was defaced by a thief. The missing memorial plaque was covertly returned following community outrage. Photo: Rochelle Baker
Previous story
Next story

Quadra Island RCMP says four times as many thefts have been reported to police compared to this same time last year.

“Percentage wise, it’s a large increase in a place like this,” said Bulford on Wednesday.

The Quadra detachment, which also polices neighbouring Cortes, Read, and Rendezvous islands, responded to 127 calls for service including 12 reports of theft, between March 1 and May 1 of this year, Bulford said.

That compared to 136 calls for service and only three reported thefts in the same period last year, he added.

Another anomaly is that the recent thefts involve higher value items, which is unusual for the islands, he said.

RCMP is investigating the theft of expensive tools from a construction site on Quadra as well as a dirt bike stolen from a home on the island.

But the most egregious example of the recent crime rash involved the theft a memorial plaque from the Quadra Legion’s cenotaph on West Road, said Bulford.

“This theft, however, is in a category of its own, and is especially low,” Bulford stated in a press release Friday. “This was an epic loser move.”

The officer called on the suspect to rethink their actions, the impacts on the community and to return the plaque immediately.

“This theft, however, is in a category of its own, and is especially low. This was an epic loser move,” RCMP Cpl. Sean Bulford on the robbery of a memorial plaque from the Quadra Island Legion's cenotaph during a recent spike in property crime.

“I don’t think you want to know all the four-letter words I heard,” Vaniderstine said. “People were pretty angry.”

The crime not only disrespected veterans’ memory, but also was an attack on the Legion, a non-profit that fundraises for the island’s causes and provides a hall for many of its significant events, he said.

“Whether it’s funerals, weddings, or memorials; we’ve touched the lives of every family on the island,” Vaniderstine observed.

Community fury probably helped motivate the thief to return the plaque to the Legion over the weekend, he said.

A branch member discovered the plaque on the hall's deck, after it was dropped off anonymously over the weekend.

Though the plaque appears to be copper or bronze, it’s actually plastic, and is probably another reason it was returned, said Vaniderstine.

“They returned it and I suppose that says something, but I’m assuming they didn’t do it out of the kindness of their heart,” he said.

“If it had any melt value, it probably wouldn’t be back.”

The plaque was in good shape and will be re-affixed to the cenotaph, built for the Quadra Legion by volunteers from the 191 Construction Engineering Flight sub-unit of 19 Wing Comox.

The uptick in crime on Quadra is likely due to one or two prolific offenders, said Bulford.

It’s too early to say if crimes are on the increase due to desperation driven by the COVID-19 pandemic, or if it’s just a momentary jump, he said, adding most property crime is fuelled by illicit drug use.

The tools stolen from the construction site were recently located abandoned along the side of Granite Bay Road in the North part of the island, he said.

The tools were marked by the construction company, and the thief likely found they were too hard to sell and so dumped them in a remote area, said Bulford.

Jenny Hartwick, CIHA harbour manager, said the custom aluminum brackets for the Squirrel Harbour dock that went missing in the robberies, also mysteriously reappeared outside the home of CIHA board member after the thefts went public.

However, some large timbers and other important construction materials are still missing.

There is the off chance that someone took some of the older timber from various sites thinking it wasn’t going to be used, and they were recycling it, said Hartwick.

“I want to look on the positive side, and hope someone in our community wouldn’t intentionally take materials used to support infrastructure that benefits the whole island,” she said.

One of large beams that went missing was slated for the Whaletown dock, so those repairs will inevitably be delayed, Harwick said.

It would have required at least two people and a truck to move, and it will likely be difficult to get off the island.

Despite the recent numbers, property crime on Quadra and Cortes is typically lower than other rural communities because the ferry system acts as a bottleneck for off-island thieves.

Property thefts usually take place at night, and suspects wanting to get off island the next day risk being picked up by cameras or police at the ferry terminal.

Most police calls on Quadra involve disturbances such as reports of yelling, fighting, arguments or parties, Bulford said.

There’s not a lot a serious crime on the islands, but rather a strong sense of community with people who are primarily welcoming and honest, he added.

Officers posted to the detachment enjoy working on the islands.

“We don’t see the constant barrage of negative interactions that can occur in other bigger, busier centres,” said Bulford.

Members posted on Quadra have worked some difficult postings to get the opportunity to be stationed on the island, he added.

Bulford cited a recent anonymous gift of four ornamental trees to the detachment as an example of the kindness in the community.

There was no note or explanation, so officers didn’t know if they were items found by a resident who then left them at the station.

But after a week, the RCMP determined the trees were meant to be a gift.

As a result, the detachment decided to dedicate the Japanese maple in honour of RCMP Cst. Heidi Stevenson.

The officer, mother and wife, was killed during a confrontation with a gunman who killed 22 people during a rampage in Nova Scotia in April.

“We’ve planted the trees, and we’re going to put a little plaque up there by the maple in Cst. Stevenson’s memory,” Bulford said.