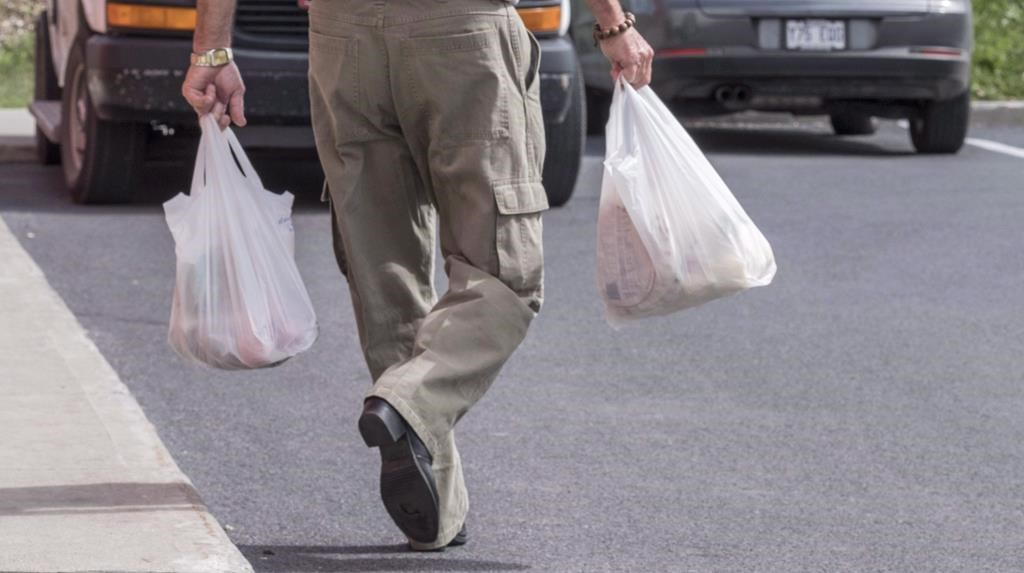 A shopper leaves a grocery store carrying his groceries in plastic bags in Brossard, Que on August 30, 2016. File photo by The Canadian Press/Paul Chiasson
Previous story
Next story

In mid-January the British Columbia government announced it was looking at a wide ban on single-use plastic grocery bags to put an end to a piecemeal, city-by-city approach to the problem of plastic pollution.

Ten weeks later, the province's chief public health officer, Dr. Bonnie Henry, issued guidance saying the exact opposite. Stores were to provide clean carry-out bags, she told retailers on March 30, as the province was closing in on 1,000 positive cases of COVID-19.

"Customers should not use their own containers, reusable bags or boxes," reads the written instruction.

It was but one sign that environmental policies were to be among the first things cast aside or suspended as the COVID-19 pandemic descended on Canada.

Fear of contamination from reused packaging and the need to operate with reduced staff and with fewer interactions between people, prompted retailers to bar reusable packaging, from bags to coffee cups. Restaurants were forced to go to a take-out only model, pushing the need for plastic and Styrofoam containers through the roof.

And as the use of plastic containers went up, some cities were forced to cut back, or even cancel outright, municipal recycling programs.

Last week Calgary suspended blue-bin operations entirely because of a COVID-19 outbreak in the city's recycling plant. Edmonton has said about one-quarter of what it collects from blue bins is going to the landfill now because it don't have the staff to handle all the material. In eastern Ontario, Quinte Waste Solutions, which provides recycling to nine municipalities, suspended collection of most hazardous and electronic waste for proper disposal. In Nova Scotia, several recycling depots were closed.

Alberta's Energy Regulator has suspended almost all environmental monitoring requirements for the energy sector, including soil, water and air pollution. Initially just applicable to some oilsands operations, on Wednesday the regulator expanded the exemption for the entire energy sector, saying it was no longer safe to do so with the threat of COVID-19.

In early April, Ontario passed a regulation under its Environment Bill of Rights that suspends the requirement for a 30-day consultation with the public on any policy that affects water, air, land or wildlife. The government cited the need to be able to respond quickly to COVID-19 as the reason, although the requirement was not lifted only for any COVID-19 policies, but for anything.

Environmental Defence executive director Tim Gray said governments that were already less inclined to care much about the environment are abandoning policies the fastest, but there are also delays to promised protections because of COVID-19 that could become a longer-term problem.

Federal Environment Minister Jonathan Wilkinson said last week the government remains committed to its climate-change and plastics ban plans, but that some policies are being delayed a bit because of the virus.

"My concern is that this will go on for so long it will push it so far down the road it can't get done before another election," said Gray.

He said decisions to suspend plastic-bag bans are a "panicked response" that may cool as more information and science is understood about the virus. Just this week, the Centers for Disease Control in the United States changed its wording about how the virus is transmitted to say it does not spread easily from touching contaminated surfaces.

Canada's deputy public health chief Dr. Howard Njoo said Friday rigorous and frequent hand washing and not touching your face without washing your hands will prevent any virus you may have picked up on your hands from making you sick.

The plastics industry has seen an uptick in demand in the midst of the virus, said Bob Masterson, the president of the Chemistry Industry Association of Canada.

"What I would say has changed is people, as a result of COVID, have a much better appreciation of the benefit of plastic as a sanitary material for the food industry," he said.

Stores across the country rushed to wrap their checkout counters with plastic shields and equip their employees with plastic gloves and face shields. Demand for hand sanitizer — mostly bottled in plastic — soared.

John Thayer, a senior vice-president at petrochemical manufacturer Nova Chemicals, said while some orders were cancelled because of COVID-19, demand has increased for plastics used to make food packaging, e-commerce packaging and shipping requirements and medical packaging and protective equipment. Everything from face masks to surgical gowns to ventilators, test tubes and COVID-19 testing kits, use plastic.

"Polyethylene and other polymers are helping prevent COVID-19 transmission and treat those impacted by the virus," said Thayer.

Sarah King, head of the oceans and plastics program at Greenpeace Canada, disputes that plastics are safer as a means to protect consumers. She said plastics have a place in the medical world but studies have shown the virus actually lives longer on plastic than any other material.

A cloth bag that is washed regularly is less likely to be contaminated than a plastic one, she said.

"There is a lot of misinformation about plastics as a healthy alternative," said King.

New York plastic bag ban comes into effect, but not without bickering