Will House of Commons resume on Monday? 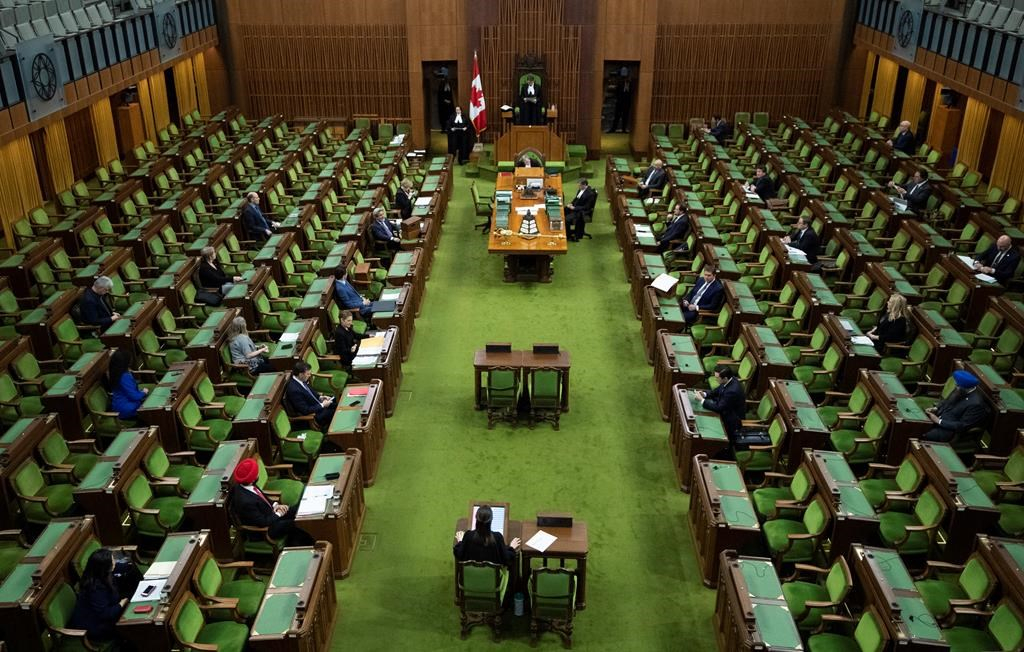 Members of Parliament, attending in limited numbers and seated apart to practice physical distancing, wait for proceedings to begin in the House of Commons on Parliament Hill in Ottawa on April 11, 2020. File photo by The Canadian Press/Justin Tang
Previous story
Next story

Intense behind-the-scenes negotiations are to continue today among federal political parties over how Parliament should function as the COVID-19 crisis drags on.

The House of Commons, which has been largely adjourned since mid-March, is to resume normal operations on Monday.

But whether that normalcy lasts more than a few hours will depend on the outcome of talks among party House leaders, which are expected to continue through the weekend and possibly into Monday morning.

Last month, the Liberals and opposition parties joined forces to reject a Conservative bid to require multiple in-person sittings of the Commons each week, with a reduced roster of MPs physically present in the chamber.

Instead, they agreed to set up a special COVID-19 committee as a sort of stand-in for the Commons.

It has been meeting in the Commons chamber once a week in person, with fewer than three dozen MPs actually present, and twice a week virtually, which has given all 338 MPs a chance to participate without risk of spreading the deadly coronavirus.

But that agreement expires on Monday and how the Commons will carry on after that is the subject of the negotiations.

Prime Minister Justin Trudeau and his ministers are taking a break this weekend from what has become their routine daily briefings on the pandemic.

The Liberals are proposing to continue with the COVID-committee but with a twist. They want the meetings to be a hybrid of in-person and virtual, with a small number of MPs in the Commons and others simultaneously participating via two large video screens that would be set up on either side of the Speaker's chair.

Liberal insiders say the government is also open to increasing the number of special committee meetings each week.

Talks continue over how, if, House of Commons should resume Monday

However, the Conservatives have had it with the COVID-committee. They've complained bitterly that it precludes them from asking the government questions on anything but the pandemic, although in reality that rule has not been consistently applied.

Conservative Leader Andrew Scheer called Friday for the House of Commons to resume its normal work schedule five days a week — albeit with no more than 50 MPs sitting in the chamber at any one time in order to respect public health protocols on physical distancing.

That would allow MPs to resume moving motions, ask questions on whatever topic they like and engage in what Scheer called "proper debate" on government legislation, private members' bills and opposition motions.

"In a crisis, oversight is more important than ever," he said.

As long as the Commons resumes its normal schedule, Scheer said his party is open to the idea of hybrid sittings.

There's one big hurdle to the Commons resuming normal activity — the chamber has not resolved how to go about allowing for MPs not in the Commons to vote electronically and not all parties are convinced it's a good idea.

Until that is resolved, only the small number of MPs actually in the chamber would be able to cast votes, which could violate one of the most basic parliamentary privileges for the vast majority of MPs who would be prevented from standing up and being counted.

Votes are not an issue with the COVID-committee arrangement, which provides time for lengthy question-and-answer sessions, statements and tabling of petitions but little else.

Under the agreement reached last month, every Wednesday after the committee wraps up, the government may, if necessary, ask the small number of MPs in the chamber to reconvene in a sitting of the House of Commons to consider emergency pandemic-related legislation.

The Commons has sat three times since mid-March to do just that, with the government each time negotiating unanimous consent in advance to allow the legislation to sail through in a matter of hours without the need for a recorded vote.

Until the electronic voting issue is resolved, NDP House leader Peter Julian has suggested that hybrid COVID committee meetings are probably the best way to proceed for the next month or so.

Bloc Quebecois Leader Yves-Francois Blanchet agreed that the easiest route would be to continue with the COVID-committee model, perhaps in a hybrid format. But he laid down a number of conditions that must be met in order to obtain Bloc support.

Among other things, he wants the government to honour previous commitments to provide incentives to recipients of emergency aid benefits to take available jobs and more non-repayable financial support to help small businesses pay their fixed costs.

The Bloc also wants MPs to sit for at least four weeks during the summer and the government to set a date in June for delivering an economic update.

If those conditions are not met, Blanchet warned his party will support the Conservative bid to resume normal Commons operations.

Should all parties agree over the weekend on how to proceed, Monday's resumption of the Commons could be brief — just long enough to seek unanimous consent for a motion laying out how the chamber, or COVID committee, will operate going forward.

Barring that, the Commons would resume its normal routine, starting Monday.

Parliament must be given more time to study COVID-19 response: Scheer