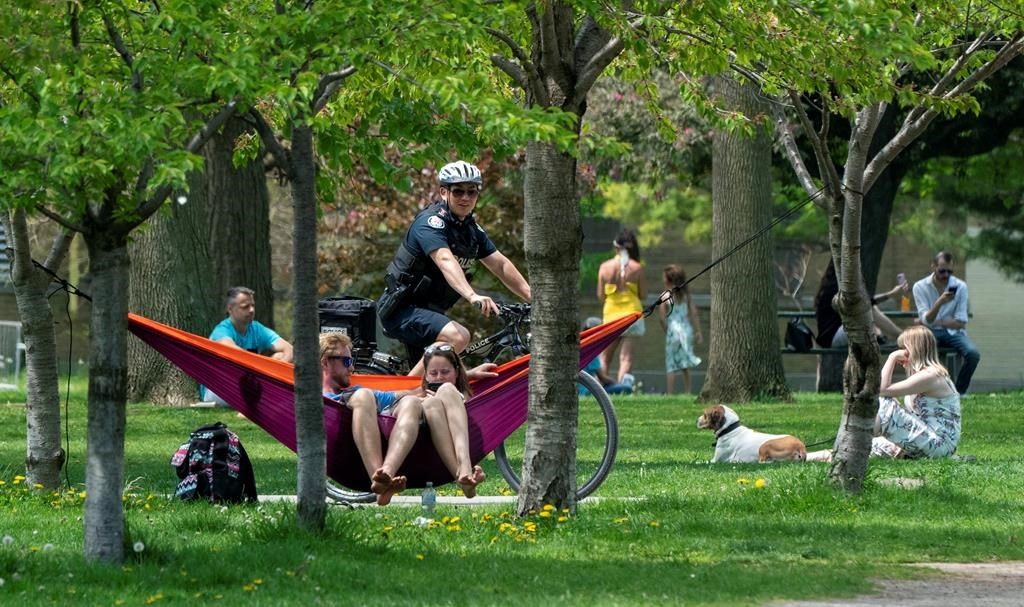 A bicycle police officer patrols Trinity Bellwoods Park in Toronto on Sunday, May 24, 2020. Warm weather and a reduction in COVID-19 restrictions has many looking to the outdoors for relief. Photo by The Canadian Presss/Frank Gunn
Previous story
Next story

A downtown Toronto park flooded by a crowd of thousands on Saturday had largely emptied on Sunday as police and bylaw officers turned up in full force.

Officials condemned the gathering at Trinity Bellwoods Park on Saturday and reminded residents that people who aren't from the same household must keep two metres apart under city bylaws during the COVID-19 pandemic — a rule parkgoers respected on Sunday, according to police.

Police Chief Mark Saunders said public drinking was a large part of the problem at the Queen Street West park, and unruly people were defecating and urinating near people's homes.

"(Homeowners) certainly didn't buy to have people defecating in their laneways, in their backyards," Saunders said. "If you're going to be bringing beer here and then utilize someone else's house as a toilet, then there's a bit of self entitlement there."

Saunders pointed out that people in other parks around the city were acting responsibly, and even people in other ends of Trinity Bellwoods Park were keeping their distance.

But police said that by Sunday, the crowds had eased significantly.

City officials said they only issued four tickets at Trinity Bellwoods Park on Saturday. They say their focus remains on educating the community.

Police did not immediately say how many tickets their officers issued.

City spokesman Brad Ross implored residents to take advantage of the city's many other parks rather than crowding and drinking together at some of the most popular destinations.

"It became a bit of a party atmosphere frankly, and alcohol was a contributing factor to that," said Ross.

"There are 1,500 parks in this city, use them please, but please do so responsibly."

He added that there are no plans to close popular parks like Trinity Bellwoods, and said a recent closure of High Park in the city's west end was only done because the space's cherry blossoms attract massive crowds in the spring.

Mayor John Tory went to the park on Saturday in what he said was an effort to educate people while trying to understand their behaviour.

But he faced criticism for adding to the crowd, and for failing to properly wear a mask — something he apologized for on Sunday evening.

"I want to apologize for my personal behaviour yesterday. I visited Trinity Bellwoods Park to try to determine why things were the way they were," he said in a written statement. "I fully intended to properly physically distance but it was very difficult to do. I wore a mask into the park but I failed to use it properly, another thing I'm disappointed about."

He said that going forward, he'll set a better example.

City officials are continuing to warn people that they can face a fine of up to $1,000 for not following social distancing orders.

They say 370 people were spoken to or cautioned at parks around the city Saturday.

Toronto remains one of the hardest hit cities by COVID-19 and the total number of confirmed cases in the city topped 10,000 on Sunday.

A total of 759 deaths are related to the virus in the city.

At the same time on May 23, over 600 citizens showed up at Queen's Park to exercise our Section 2 rights of peaceful assembly and freedom of expression, and to protest the government's unlawful emergency orders.

Interestingly, the only mention of the rally was an offhand comment in a CBC article about the reported number of new COVID cases, where they claimed there were about 200 protesters.

It's time for Canadians who want our free and democratic society to return to quit drinking and crapping in alleyways, and focus their attention on sending a meaningful message to our "leaders".

Wake up Toronto! We can party when this is over, but we have obvious work to do now.

All that is required for tyranny to triumph is for good people to do nothing.