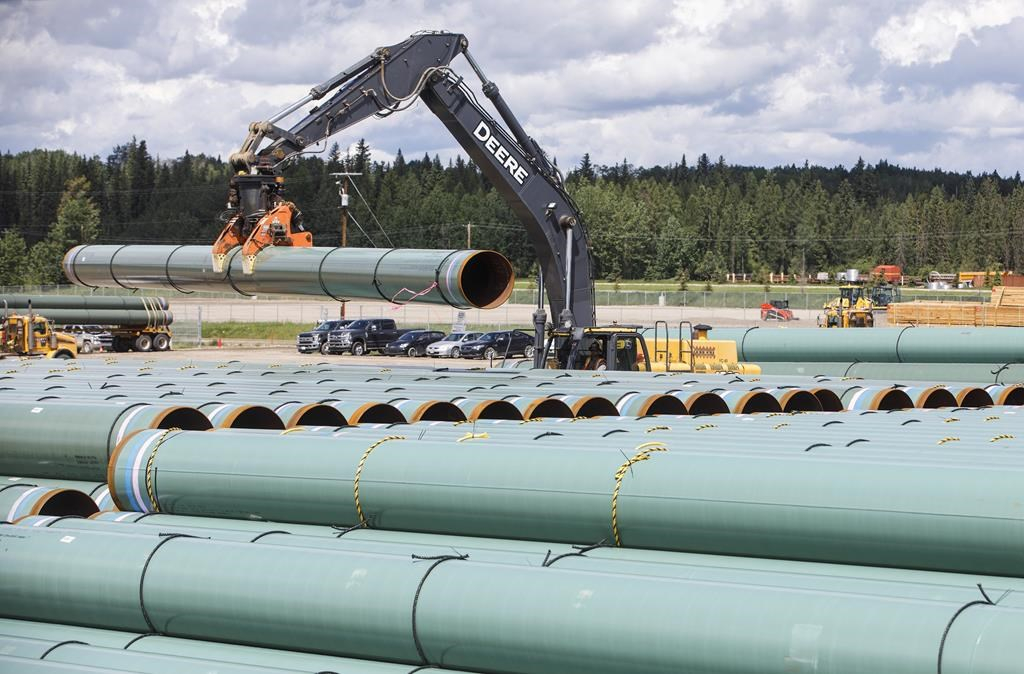 Trans Mountain says it has reached another "key milestone" in the project to triple capacity of a pipeline moving oil from the Edmonton area to port in Burnaby, B.C.

A statement says construction on a seven-kilometre section of the line has begun in Kamloops.

It says a crew of up to 50 is preparing the area, but the workforce will grow to about 600 during peak construction later this summer or early fall.

The federal Crown corporation says completion of the Kamloops section of pipeline is expected in about seven months.

Kamloops is part of Trans Mountain's Interior construction area that is to see 185-kilometres of pipe laid from just north of the city to the summit of the Coquihalla Highway.

Trans Mountain delivers about 300,000 barrels of petroleum products daily, but expansion is expected to boost that to 890,000 barrels and increase the number of tankers through Vancouver's harbour to more than one a day.

"It is good news for workers in the region and an important step forward on the path to building this critical piece of infrastructure," Ian Anderson, president and CEO of Trans Mountain, says in the statement.

Construction spending in the Kamloops area is expected to be more than $450 million over the next two years, with additional workforce spending of more than $40 million.

Pipe installation began in Alberta late last year and the first section of pipe, near Edmonton, is 60 per cent complete, the company said last month.

The estimated cost of completing the entire expansion project was originally estimated at $7.4 billion, but Anderson said in February the budget had grown to $12.6 billion.

You notice there's been no

You notice there's been no Big Splash about when they met the conditions imposed either by the old review board or the new one?
Who wants to bet that's just mere oversight, and has nothing to do with the *pre-construction* conditions that were to be met prior to any preparation for construction taking place.
Is that deafening silence I hear?

Absolutely shameless that guy. The people of BC can do better.

The federal government, who

The federal government, who bought the pipe for almost $4B and the expansion project, likely to ring in at $8B or more on behalf of all Canadians without prior consultation, need to publish which of the 209 conditions they have met satisfactorily to date, and whether that implies approval to proceed.

Anyone want to guess what biologists specializing in orcas think about this project, considering that a pipe in the ground is only part of the story?

There are two misleading

There are two misleading errors here:

1) The title: “Trans Mountain pipeline construction begins in B.C.“. Construction has actually been ongoing in BC for a long time. Those who live near the Westridge Marine Terminal and the Burnaby Mountain Terminal have been living with the noises of pile driving and construction traffic, and traffic disruption, with complaints having had not much effect. The pile driving keeps me house bound, and even with all my windows and doors closed it is as loud as my radio inside my house. It can be heard over five kilometres away in East Vancouver.

Canadian Press should do much better.