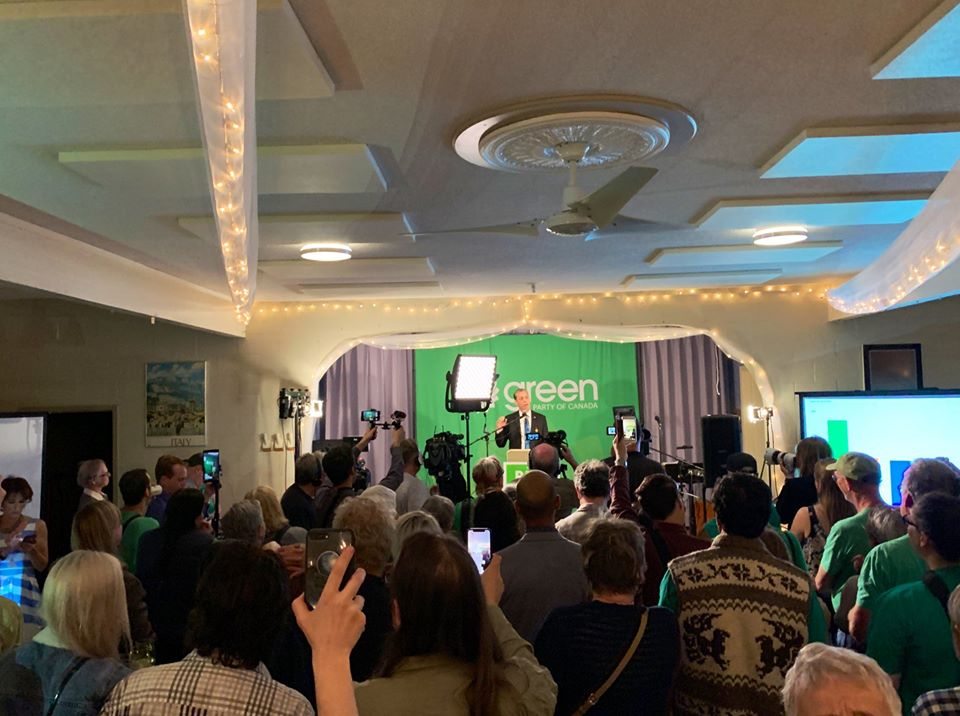 Elizabeth May says “everything has changed” since 2011 when she became the Green Party of Canada’s first elected Member of Parliament.

May, the MP for Saanich—Gulf Islands and the party’s Parliamentary leader, stepped down after 13 years as national leader last November, triggering a leadership race that will be decided this fall.

Contestants had until June 3 to submit their applications and pay $1,000 to the party, as well as gather 100 nominations from members in good standing, including at least 20 Young Greens.

As of Thursday, seven conditional entrants are listed as candidates to succeed May as leader.

In 2011, soon after getting elected, May vowed to media that "whether I'm one vote or one voice, I'll be a powerful one” in Parliament.

Today, she is no longer that one voice, sitting with Green MPs Paul Manly representing Nanaimo—Ladysmith and Jenica Atwin representing Fredericton.

The party saw over a million votes for the first time in the 2019 federal election. Green representatives have also been elected provincially across the country, from B.C. to Ontario, P.E.I. and New Brunswick.

“We’re not any longer a group of people in the wilderness,” she said during a press conference Wednesday in Ottawa. “Right now it’s clear in the pandemic that the policies of the Green Party are the policies everyone’s talking about."

Candidates will now have to make an additional $9,000 payment for a “contest entry fee” due within 10 days of their candidacies being approved.

Then they have their work cut out for them over the summer to fundraise $20,000, what the party is calling a “secondary contest fee,” which is due Sept. 1.

Elizabeth May says “everything has changed” since 2011 when she became the Green Party of Canada’s first elected Member of Parliament.

May said Wednesday that, while the $30,000 in total leadership race fees is many orders of magnitude higher than what she paid in 2006 for her leadership contest, it is helping narrow the race.

“Becoming the leader of the Green Party is a real thing, and if you can’t raise the money to compete in a leadership race for a party that has an elected caucus sitting in Parliament — it does winnow it out,” she said.

Almost all candidates have been on ballot

All the conditional candidates have represented the party in elections before, save for former Ontario Liberal environment minister Glen Murray.

Murray, who is also the former mayor of Winnipeg and former executive director of the Pembina Institute, says he wants to see a “fully circular, zero waste, greenhouse gas neutral economy” in Canada.

Another former Liberal, David Merner, says he volunteered for the Grits for over 30 years.

He ran under the red banner in the riding of Esquimalt—Saanich—Sooke in 2015, but quit the party after Prime Minister Justin Trudeau announced he would be buying the Trans Mountain oil pipeline and expansion project in 2018. Merner has supported universal pharmacare and decriminalization of drugs.

May has said she will not be officially endorsing any of the contestants, but in order to ensure inclusiveness she will be “supporting the fundraising efforts of equity-seeking candidates.”

That includes Annamie Paul, a lawyer who has served as the party’s international affairs critic, and ran for the Greens in Toronto Centre.

Paul has volunteered with Operation Black Vote Canada and sat on the Equal Voice steering committee, and wants to run a campaign about “attracting diverse faces and voices into politics and into the party.” She also wants to withdraw from the Canada-U.S. Safe Third Country agreement.

Amita Kuttner, an astrophysicist, is also an advocate of diversity and inclusion, co-founding a nonprofit that promotes equality and justice while taking into account technology and the climate crisis.

Kuttner has been the science critic for the party, and developed policy on artificial intelligence, running for the Greens in Burnaby North—Seymour.

Dylan Perceval-Maxwell, an environmental activist, has ran as a Green candidate in Laurier—Sainte-Marie and in Alfred-Pellan.

He has focused on a range of policies including growing the green economy, eliminating income tax for low earners and offering emergency preparedness training to Canadians.

Immigration lawyer Meryam Haddad was the candidate for Châteauguay—Lacolle in 2019. She is running as a socialist and wants to implement a Green New Deal in Canada.

Lawyer Dimitri Lascaris was told on May 26 that he was rejected as a candidate. He appealed, and the party’s approvals committee overturned the decision and approved him this week.

Lascaris, who is a former justice critic for the party, was the Green candidate for London West in 2015 and wants to pass labour reforms to boost union membership, raise the minimum wage and slash military spending.

There were “at least one or two appeals going on over internal decisions around vetting” related to the leadership race, said May.

Nova Scotia computer scientist and veteran Judy Green, who was the candidate for West Nova in 2019, announced June 2 that her application to run in the leadership race had been declined by the party.

“The reasons for the rejection included accusations that were not accompanied by evidence,” she tweeted.

Green added on Twitter that she would appeal the decision and she believed it would get resolved. “Despite being shocked and disappointed,” she said, she was a “lifelong believer in fair process, patience and collaborative problem solving” and was “confident that this matter will be resolved shortly.”

Meanwhile, Alex Tyrrell, the leader of the Green Party of Quebec since 2013, announced June 3 he was quitting the leadership race.

In a lengthy statement posted on his website, he accused May of “intervening in the race on a daily basis” and consolidating power in the party.

“Over the past months and weeks Ms. May and her entourage have made it amply clear to me that they will do everything in their power to oppose my candidacy,” he wrote.

On Wednesday, May said the allegations were untrue. “Evidently he did not understand the structure of the Green Party and its constitution,” she said.

As a Green MP in the House of Commons, said May, she didn’t play a role in the governance of the party, as she did not have that kind of power as a previous leader.

“I think Alex Tyrrell made his decision, so I told him good luck, as the head of the Green Party of Quebec,” said May.

‘Unlikely’ to have physical convention: May

The Green Party leadership vote will begin on Sep. 26 and end at 3:30 p.m. (all times Pacific Time) on Oct. 3. The results of the vote will be announced later that day.

Voting is being done through online ballot or mail-in ballot, the latter of which must be requested before 2 p.m. on Aug. 14. Completed ballots have to be received by the Green Party’s central office by 2 p.m. on Sept. 25, after which they will be entered into the online voting system by office volunteers.

May said it was “unlikely at this point” that the party would be physically gathering in P.E.I. to hold the leadership convention scheduled for October in that province.

The party is using a one-member, one-vote system with a preferential ballot. The leader is being elected by a majority vote, with ballots including an option for “none of the above.”