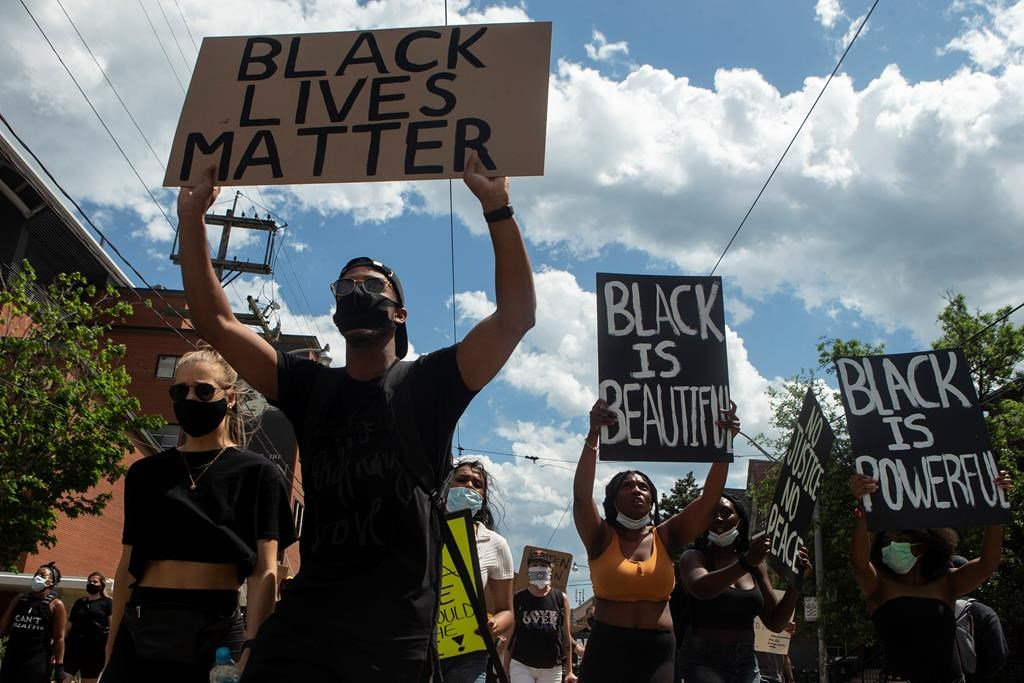 Protesters march during an anti-racism rally in Toronto, on Saturday, June 6, 2020. Photo by The Canadian Press/Chris Young
Previous story
Next story

Participants from different communities and of all ages crowded into a downtown Montreal square to listen to a cross-section of activists, community leaders, sports personalities and politicians before snaking peacefully through downtown Montreal to Dorchester Square, chanting "black lives matter" and "no justice, no peace" among other slogans.

They took a symbolic knee during the march — the second Sunday in a row the city has hosted one since the release of a video showing a white Minneapolis police officer kneeling on the neck of a black man, George Floyd, for nearly nine minutes.

Floyd fell still and died, the officer's knee still on his neck.

His death has sparked demonstrations denouncing racism, violence and police impunity right across the globe and well-attended events were held Saturday in several Canadian cities, including Toronto, St. John's, Calgary and London, Ont.

In Montreal, demonstrators called out Quebec Premier Francois Legault for his belief the province doesn't have a systemic racism problem.

Legault acknowledged last week that discrimination does exist, but denied there was a "system of discrimination" and chalked it up to a small minority of people.

"The major issue we have here in Montreal is that our premier seems to think that we don't have a systemic racism issue here," said Svetlana Chernienko, a mental health advocate.

Chernienko, whose mother is Russian and father is Nigerian, is a mother of four. She recounted her own experiences with random police checks and stops as a teen and a random stop while driving a luxury vehicle in her 20s.

She gives her children advice before they leave the house — don't wear sagging pants, don't wear a hoodie or keep the hood down, and keep your hands out of your pockets when with police.

Thousands hit Montreal streets again on Sunday, June 7, 2020, to speak out in turn against racism, systemic discrimination and police brutality, following other Canadian communities that held marches this weekend.

"We need to continue to communicate these issues," Chernienko said. "We need to keep it peaceful, but we need to get loud."

"He (Legault) publicly denies it, but he is very aware of it," Nestor said. "He is an intelligent man, he knows very well that there is systemic racism that exists in Quebec."

Willy Tchuilen Ngatcha said he protested Sunday because for 12 years, he "not able to breathe."

Ngatcha, who is black, said he has had difficulties working and providing for his family because of discrimination, "and I'm here to scream it out loud."

"I could be the next George Floyd. I don't want it to happen to me, it's why I'm here right now," he added. "I'm calling on politicians to act now and go deeply inside and investigate what's happening to us."

Quebec Liberal Leader Dominique Anglade weighed in on what she heard.

"When we hear the stories by those here today, we feel the need to say never again," said Anglade, who recently became the first black woman to lead a provincial party.

But to be convinced of this requires concrete actions and strong political positions on racism and discrimination, she added. The mother of three said her only wish is that her children, like all Quebec children, are permitted to reach their full potential regardless of their skin colour.

"Now is the time for change and we must stay strong and united," said Dubourg.

Montreal's police chief Sylvain Caron had an offer to attend the rally rescinded on Saturday after organizers explained some participants and groups were opposed to his presence.

The force said on its social media page it respected that decision and noted officers would be present to keep tabs on the march.

Demonstrations were also held in front of the Quebec's national assembly building in the provincial capital as well as in Sherbrooke, east of Montreal.

A large crowd also gathered for a protest outside Mississauga, Ont.'s city hall and hundreds marched through the surrounding streets, carrying "black lives matter," "silence is violence" and "racism is the pandemic."

Despite the COVID-19 pandemic and health authorities pleading people to keep a two-metre distance, that was impossible in Montreal due to the sheer number of demonstrators, although the vast majority were however wearing masks or face shields.

Many merchants on Ste-Catherine Street boarded up their windows as a preventative measure fearing a repeat of last week, when following the peaceful rally, looters and vandals got into confrontations with police. There were thefts and damage, including some store windows being smashed.

Montreal police have said they considered the vandalism last week a separate matter to a largely peaceful protest and said some people took advantage of the protest to commit crimes.

On Saturday, they published the photos of those caught looting on store cameras in an attempt to make arrests.

— with files from Roxanne Ocampo in Montreal.