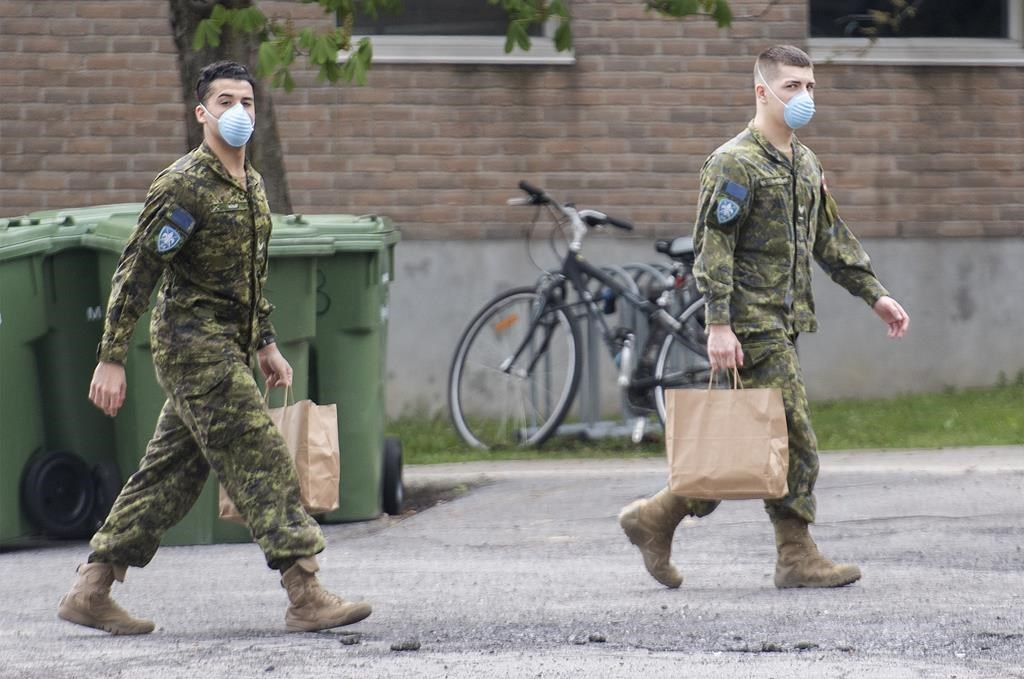 Members of the Canadian Armed Forces are shown at Residence Yvon-Brunet, a long-term care home in Montreal, on Saturday, May 16, 2020. File photo by The Canadian Press/Graham Hughes
Previous story
Next story

Members of the Canadian Armed Forces working inside long-term care homes could find themselves testifying about the state of those facilities in relation to lawsuits against the institutions.

The unusual scenario follows the deployment of hundreds of service members in April and May to more than two-dozen nursing homes in Ontario and Quebec hit hard by COVID-19.

Damning military reports later said the troops found cases of abuse and negligence in the homes, including bug infestations, aggressive feeding of residents that caused choking, bleeding infections and residents left crying for help for hours.

Stephen Birman and Lucy Jackson of Toronto law firm Thomson Rogers are leading a proposed $20-million class-action lawsuit brought against the Altamonte Care Community on behalf of the Toronto home's residents and their families.

The lawsuit against Altamonte and its parent company, Sienna Senior Living Inc., alleges negligence and breach of duty over a lack of proper protocols and training as well as severe understaffing and a lack of proper equipment before and during the pandemic.

It is one of several court actions brought against long-term care facilities since COVID-19 first hit in earnest in March, ravaging many homes across the country. Nursing home residents and staff account for the vast majority of COVID-19 deaths in Canada.

Birman and Jackson say the troops' firsthand observations could be critical in proving their clients' claims against the home, particularly as lockdowns imposed since March have made it difficult to impossible for residents' families to get into the facility.

"The military is in a position to provide very helpful evidence," Birman told The Canadian Press.

"They came in as a third party, as an objective observer, and they saw and identified a horrendous and shocking situation that may never have come to the forefront to the extent that it has if not for their involvement."

The military report on Altamonte includes allegations most residents did not get receive their medication or proper meals and many had been left in bed for long periods without being moved or washed. There were also concerns about staff shortages and training.

Members of the Canadian Armed Forces working inside long-term care homes could find themselves testifying about the state of those facilities in relation to lawsuits against the institutions.

Similar observations were made about the other four Ontario facilities, including bug infestations, aggressive feeding of residents and residents being left crying for hours The Quebec report was less critical, but did raise concerns about staff shortages.

None of the allegations in the reports or the proposed lawsuit, which was filed on June 1, have been proven in court.

Birman and Jackson are now collecting information to bolster their case for getting the lawsuit certified as a class action, which involves talking to as many residents, family members, staff as well as military personnel as possible.

Military spokeswoman Lt. Stephany Lura said military personnel had the same obligation to report to their commanders whatever observations they had while working in the long-term care facilities, as they would with any other mission.

"Like any other Canadian, CAF members may be called upon as witnesses," she added. "This situation is no different. Our members will receive all necessary support from the Department of National Defence and the Canadian Armed Forces should it be needed."

"I would think everybody who's involved in this important matter would want to hear from the military when this matter makes its way to the courts," Birman said. "We will do everything we can to gather their evidence so it forms part of the record in this case."

The military had more than 1,000 service members in 15 long-term care facilities in Quebec and almost 500 in five homes in Ontario last week.

While officials confirmed Sunday that operations at one of those Ontario homes, Orchard Villa in Pickering, had ended, the military appeared poised to deploy into another home in the city of Vaughan, north of Toronto.

"We can confirm that CAF is onsite at Woodbridge Vista today to do an onsite assessment," said Gillian Sloggett, spokeswoman for Ontario Minister of Long-term Care Merrilee Fullerton.

"We are grateful for CAF's continued support and we will have more news to share about next steps in the coming days."

Talks around the continued provision of service members to long-term care facilities in Quebec until September are underway between Ottawa and the provincial government.

— With files from Allison Jones and Salmaan Farooqui in Toronto.

Pandemic lawsuits could tie up courts for years