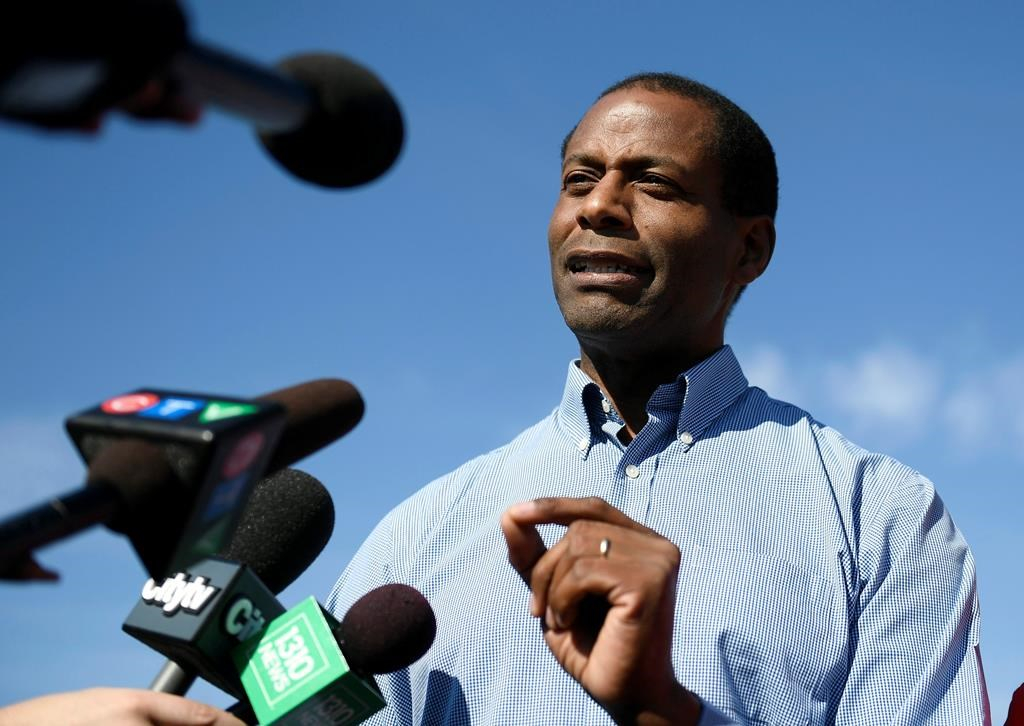 Greg Fergus, Liberal candidate for Hull-Aylmer and chair of the black caucus in Parliament, speaks to reporters during a press conference in Ottawa on Thursday, Sept. 19, 2019. File photo by The Canadian Press/Justin Tang
Previous story
Next story

A group of Black parliamentarians and their allies are calling on all levels of government to take action to reduce systemic racism in Canada.

The request came in a statement Tuesday from the Parliamentary Black Caucus, which was created in 2015 and includes members of Parliament and senators from various political parties.

The statement included calls for concrete reforms to policing, justice and corrections; targeting economic aid in the COVID-19 pandemic to Black-owned businesses and Black entrepreneurs; and supporting Black artists and institutions devoted to Black culture.

"While Canada is a great country, for many Black Canadians it has yet to achieve its full potential," the group said. "For more than 400 years, Black Canadians contributed to what all Canadians enjoy today, in spite of the legal, social, and economic barriers.

"In order for Canada to fully realize its potential, we must work to eradicate the consequences of systemic discrimination faced by Black Canadians."

The list also includes ending mandatory minimum sentences for certain crimes. The Liberals promised to look at repealing some in their successful 2015 campaign but have not done so.

Liberal MP Greg Fergus, who chairs the Parliamentary Black Caucus, said he doesn't know why the government has not delivered on that promise.

"I can't change the past, I just want to influence the present and the future," he said in an interview. "I'm pushing for it to be done now and I think there's an appetite, I think there's a big political appetite to do it."

Besides eight MPs and senators who identify as Black, the statement was signed by dozens of other parliamentarians from the Liberal party, NDP and Greens, and multiple factions in the Senate.

In a statement of their own, the Conservatives accused the Liberals of playing "disgusting partisan games" by not inviting MPs from all parties to join.

A group of Black parliamentarians and their allies are calling on all levels of government to take action to reduce systemic racism in Canada.

"Conservatives acknowledge the existence of systemic racism in Canada; we condemn it and support calls to eliminate it," spokeswoman Kelsie Chiasson said.

Fergus said he didn't seek out support from Conservatives for the statement because their leader, Andrew Scheer, refused to recognize the existence of systemic racism when asked about it multiple times during a recent television interview.

"I figured there was no starting point at that point," he said.

No Conservative MPs or senators have joined the Black caucus but Fergus said they are welcome to sign onto the statement regardless, as some 160 non-Black parliamentarians had done by Tuesday afternoon.

The caucus's statement follows a wave of protest across North America against racism and police brutality sparked by the killing of a Black man, George Floyd, by police in the U.S. last month.

The Parliamentary Black Caucus said non-Black people are only now realizing the scope of systemic racism in Canada, and the group is proposing a series of measures to cut down on what the group calls a "pernicious and widespread phenomenon."

"The members of the Parliamentary Black Caucus are heartened to see so many of their fellow citizens taking to the streets to peacefully express their desire for Canadian society to stamp out racism," the group wrote.

"However, to rid our society of racism will require concrete actions by all levels of government to begin to make a difference."

Those measures include improving the collection of race-based data, which the group identified as a priority, as well as reforming the police and the justice system to eliminate bias and discrimination against Black Canadians and Indigenous people, who are, respectively, three to four times and eight times more likely to be incarcerated than white Canadians.

But Fergus said the needed reforms go well beyond ridding the justice system of unconscious bias.

The group wants to see that Black Canadians have equal economic opportunities, including access to financial institutions that support businesses.

"We want to create jobs and create wealth and create prosperity," he said.

Trudeau welcomed the calls without committing to implementing any of them in particular.

"We are committed to moving forward on a huge range of measures. We're working with communities, we're working with leaders like members of the Parliamentary Black Caucus to identify what exactly we need to move forward on first in priority on," he said in his daily appearance outside his residence at Rideau Cottage.

"I think it's really important that we all come forward and look at bold ideas that we can take on very soon to fix the systemic discrimination that continues to exist in our country."

He said many of the calls are things his government is already working on, such as on targeting economic support to Black-owned businesses and young Black entrepreneurs.

"We will be moving forward on a number of those recommendations," Trudeau said.

This report by The Canadian Press was first published June 16, 2020.