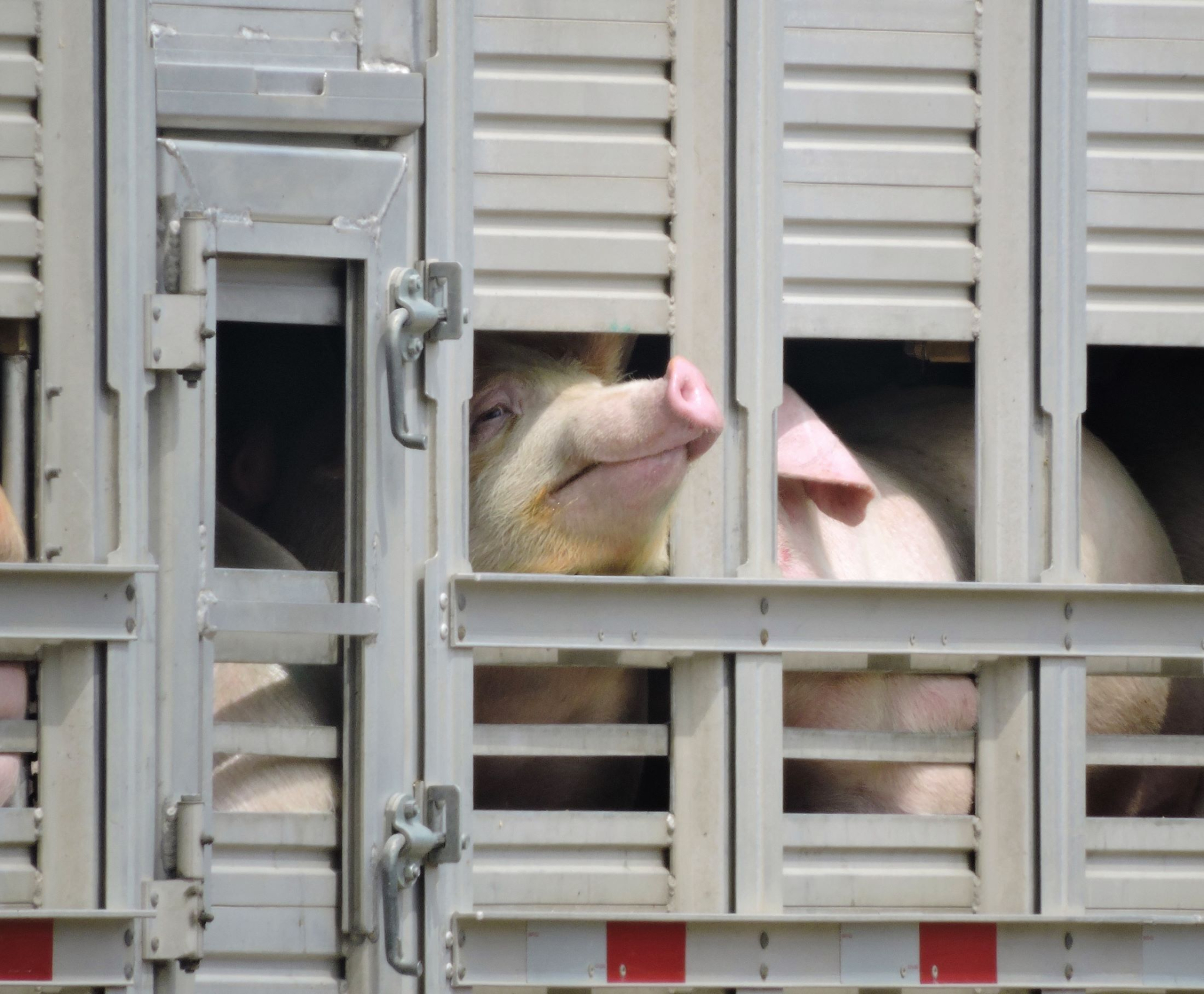 Pigs in a transport truck en route to an Ontario slaughterhouse in December 2013. On Wednesday, Ontario passed a bill that would raise fines for trespassing at farms and meatpacking plants. Photo from Shutterstock
Previous story
Next story

The Security from Trespass and Protecting Food Safety Act, Bill 156, hikes fines for trespassing in newly created “animal protection zones” and makes it illegal to enter livestock facilities under false pretences. It was opposed by journalistic organizations, animal rights groups and the Canadian Civil Liberties Association, which said the law violates the charter right to free expression.

Camille Labchuk, executive director of the non-profit Animal Justice, said in a statement that transparency in factory farming is more important than ever during COVID-19. Some of the worst outbreaks of the virus have happened at meatpacking plants, she added.

“Whistleblowing employees are often the only way the public has to see what conditions are like on farms,” Labchuk said.

The government has said the bill, introduced by Agriculture Minister Ernie Hardeman and backed by farming groups, is meant to protect farmers and Ontario’s food supply from trespassers. Trespassing is already illegal, but the bill goes further, prohibiting people from blocking vehicles carrying livestock, giving farmers the ability to “arrest” trespassers, and opening up violators for civil lawsuits.

Ontario Pork Producers, which represents pig farmers in the province, and Chicken Farmers of Ontario both thanked the government for passing the bill.

In a statement, Chicken Farmers of Ontario said existing laws were not enough to stop animal rights activists from entering farm property.

“This is not right,” the statement said. “Farmers should not have to live in fear of trespassers threatening our animals, our families, and our way of life — without facing legal repercussions.”

The Canadian Association of Journalists warned the bill could target whistleblowers who speak out about unsafe or cruel conditions. It could also penalize journalists who go undercover to report on wrongdoing, a technique that is "occasionally necessary," the association said.

Bill 156 was opposed by journalistic organizations, animal rights groups and the Canadian Civil Liberties Association. Critics warn it could target journalists and whistleblowers.

“As recently as last summer, video from animal rights groups has led to media reporting and police investigations,” the association said in a statement last week. “This bill would have prevented those activities.”

Ontario Green Party Leader Mike Schreiner, who voted against the bill, noted Wednesday that similar bills in the United States have been struck down.

“While I agree we need stronger trespassing laws to protect farmers, I believe we can do this without violating people’s freedom of expression and freedom of assembly rights, and without criminalizing investigative journalism,” he said via Twitter.

“Let’s promote Ontario food and farmers instead of suggesting that we have something to hide.”

Nearly 50,000 people have signed an online petition to stop the bill.

cons sing from the same

cons sing from the same corporate song sheet world over: australia passed this gag law criminalizing dissent over coal, Albaturda passes one with $250000 fines and jail for protesting "infrastructure aka fossil. now DOFO et al swing along. It wont stand but will cost court time and meanwhile brutal animal torture.
Some "ways of life" only survive in the shadows or under rocks.

What’s next ? The sharing of

What’s next ? The sharing of images of the “industry” being criminalized. Emma perhaps now is a good time engage Joanne McCarthur. https://joannemcarthur.com/projects/photos/we-animals/
We need objective oversight in factory farming with enough transparency to be accountable to what goes on in those dark hidden places. If the Ford government wont inspect nursing homes with any real commitment to basic standards of humanity, why would Ford allow a critical oversight into animal welfare in the food chain. If the goal is to keep activists off site then the public at large should know what the standards are for raising and processing animals and that meaningful government oversight is policing the industry with transparency.. Surprise visits rather than announced ones is just one way. Humane treatment of animals and livestock has been studied and acted upon by Temple Grandin. The models exist if the will to do so does not.

“The greatness of a nation and its moral progress can be judged by the way its animals are treated.”

Well well well............Ontario also has its deplorable industry, which its deplorable government is moving to protect? Covid revealed how ghastly Cargill type killing floors are, how dangerous and unprofitable they are to work in, and how they've worked hard behind closed doors to gain a monopoly on food production in Canada.

Stands to reason open for business boosters have to come down hard on anyone who dares critique such corporate success stories.

But now, most of us know. We;re eating poison, the flesh of torture victims and slave labour: as consumers, we'll continue supporting these butchers at our own peril. Check out the article in June's Alberta Views..........on what grass fed beef does for the climate, the cattle, and the land.