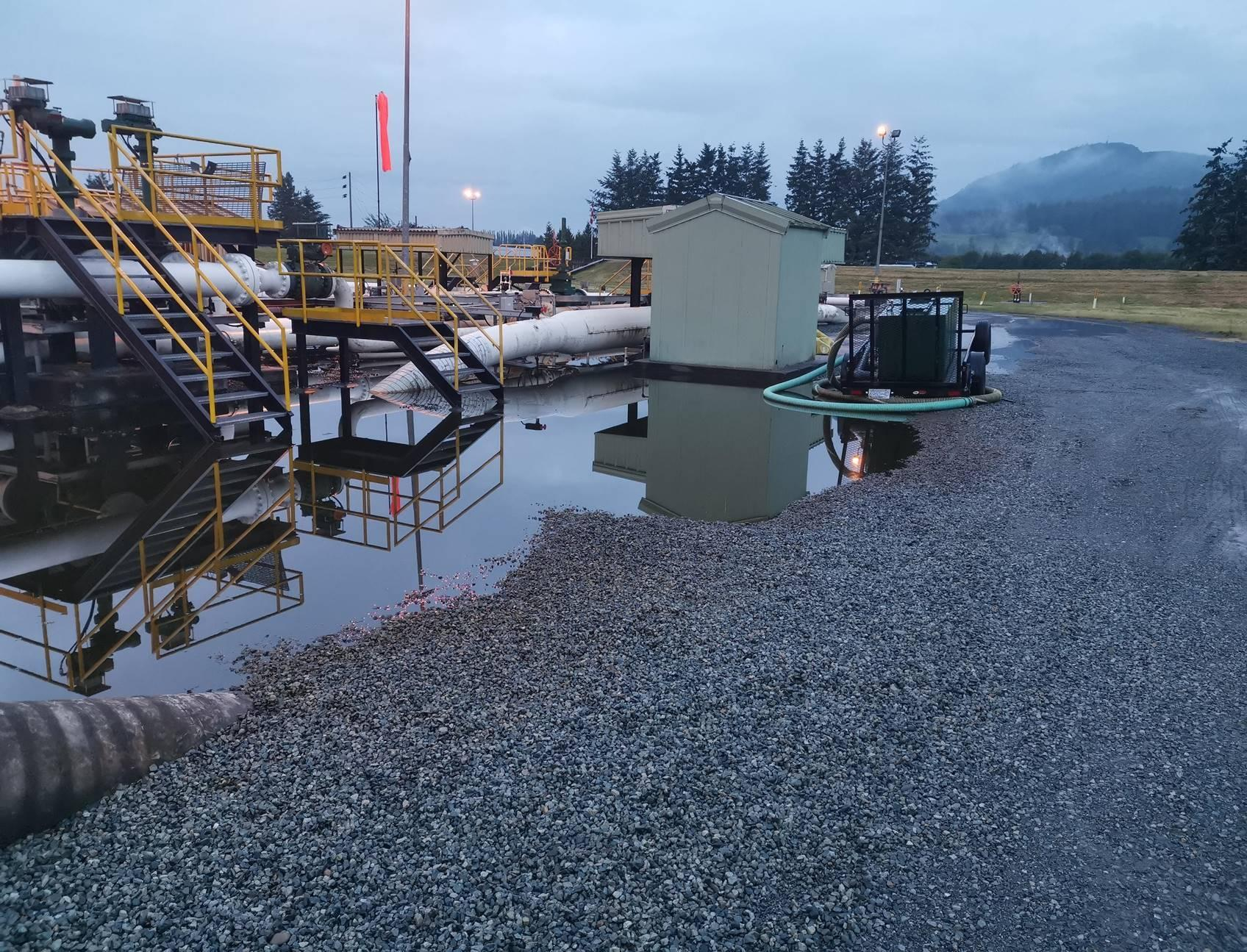 The Sumas Pump Station on the morning of June 13, 2020 showing the oil spill before cleanup. Trans Mountain photo
Previous story
Next story

The chief of Sumas First Nation is calling for an independent investigation into the Trans Mountain pipeline, following an oil spill this past weekend near a significant burial ground for the community.

Natural Resources Minister Seamus O’Regan’s office says it is monitoring the situation closely and expects all companies to “adhere to the highest standards of safety and environmental stewardship.”

A spill at the Sumas Pump Station in Abbotsford on June 13 released up to 1,195 barrels, or 190,000 litres, of crude oil, according to an initial estimate by the pipeline company.

Sumas First Nation said the oil from the pump station, located near an ancestral Semá:th village site, flowed into an adjacent cow pasture “located within the area of the aquifer to the Sumas First Nation reserve,” and many residents reported smelling strong fumes over the weekend.

Trans Mountain, which is owned and operated by the Canadian government via a Crown corporation, said it restarted the pipeline the next day after its air and groundwater monitoring did not show “any risk to the public or community.” It also said the spill was “fully contained on Trans Mountain property.”

“Clean-up and remediation will continue in co-ordination with regulators, Indigenous groups and the local community,” said the company, adding it is working with regulators including federal Canada Energy Regulator and Transportation Safety Board, as well as B.C.’s Ministry of Environment and Climate Change Strategy, “local authorities” and Indigenous groups on the cleanup.

Sumas First Nation Chief Dalton Silver said in a statement Tuesday that he would have no confidence in Trans Mountain’s ability to finish building its expansion project without “inflicting more damage to our territory,” unless there was an “independent, transparent and scientific investigation into the safety of this old pipeline.”

The nation said the pump station pumps oil up to a storage facility on Sumas Mountain, where Silver said there are victims of a 1782 smallpox epidemic buried around a site named Lightning Rock.

The expansion project would roughly triple the capacity of the existing pipeline, moving up to 890,000 barrels a day from near Edmonton to a terminal in Burnaby in metro Vancouver. This month, the company said it had reached a “key milestone” in the project when it started construction on a seven-kilometre section in Kamloops.

The chief of Sumas First Nation is calling for an independent investigation into the Trans Mountain pipeline, following an oil spill this past weekend near a significant burial ground for the community:

Grand Chief Stewart Phillip, president of the Union of British Columbia Indian Chiefs, joined Silver in Tuesday’s call for an independent investigation. He argued the federal government cannot investigate itself when it comes to what maintenance issues had been addressed when Kinder Morgan sold the pipeline system to Canada.

“Pipelines have a set life span and Trans Mountain is already well past the date it should have been decommissioned,” Phillip said. “Transparency is imperative, otherwise we can only assume the aging pipeline is a ticking time bomb, all along its entire 1,100-kilometre route.”

Trans Mountain says it has reported 84 spills on its pipeline system to the federal regulator since 1961. It said 70 per cent of all spills are at pump stations or terminals. In May 2018, for example, as Kinder Morgan was negotiating with the federal and Alberta governments over securing a financial deal, the company shut down the pipeline following a spill in Darfield, B.C.

Federal Environment and Climate Change Minister Jonathan Wilkinson’s office declined to answer a question from National Observer about whether he was concerned about any harmful environmental effects of the oil spill, instead passing the question to O’Regan’s office.

“We take this matter very seriously, and we are monitoring the situation closely. We expect all companies to adhere to the highest standards of safety and environmental stewardship,” said Ian Cameron, O'Regan’s press secretary.

On Monday, two members of Parliament tabled petitions against the pipeline in Parliament. Jenny Kwan, the NDP MP for Vancouver East, tabled a petition calling on the government to “immediately act” to stop the pipeline from proceeding through B.C., saying it “brings massive environmental and economic risk.”

Green Party parliamentary Leader Elizabeth May, the MP for Saanich—Gulf Islands, tabled a petition from residents in her riding asking the government not to put public funds toward either maintaining the pipeline it already owns, or toward building out its expansion.