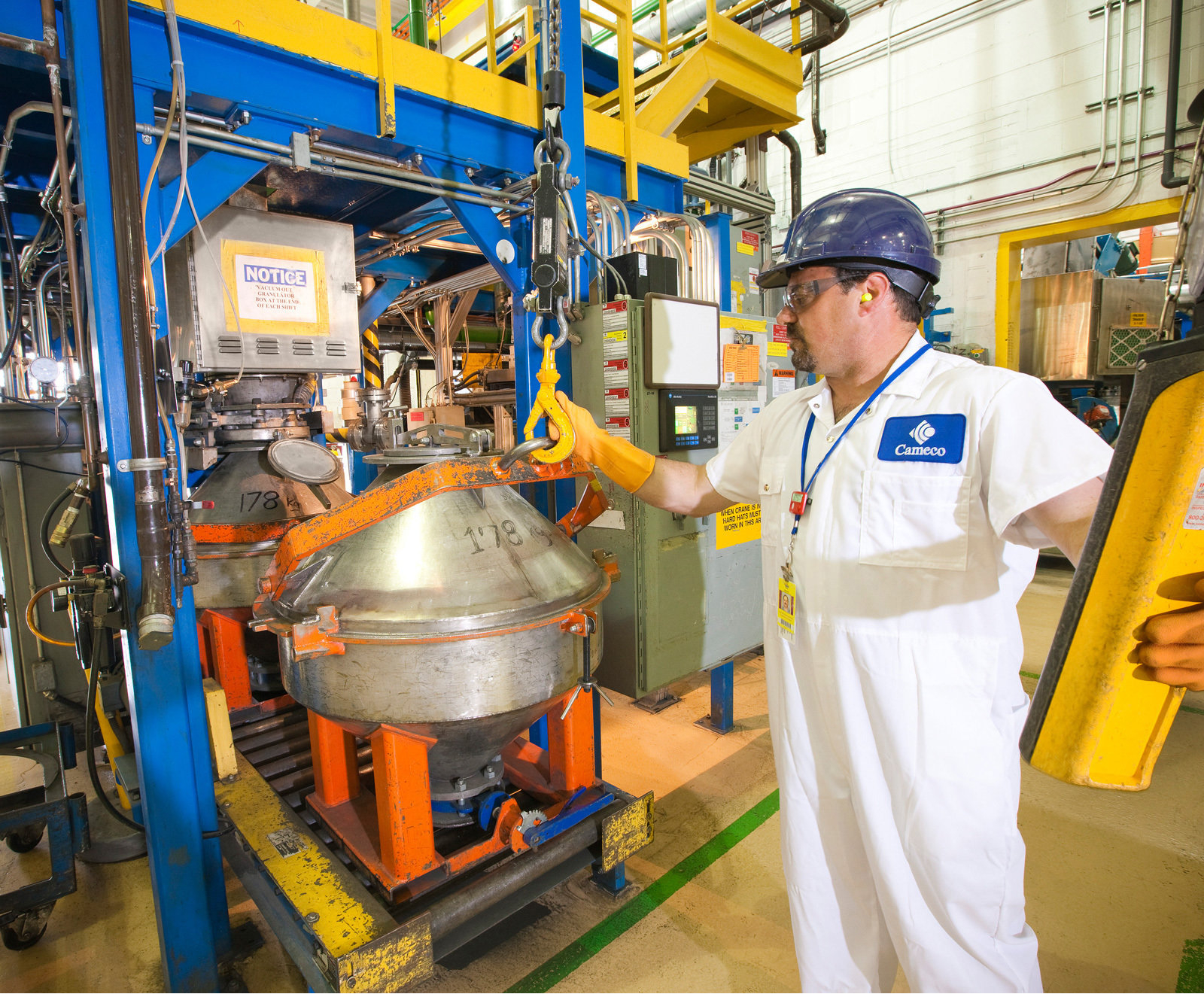 An employee at Cameco Fuel Manufacturing Inc. Uranium dioxide powder is refined into fuel. Powder is checked for consistency to make pellets for use in fuel bundles.  Photograph courtesy of Cameco Corp.
Previous story
Next story

The provincial government unveiled its plans Wednesday to establish an office to co-ordinate nuclear policy and program work within the Climate Change and Adaptation Division of the Ministry of Environment.

The new nuclear secretariat is mandated to develop and execute a strategic plan for the deployment of “clean-energy small modular reactors” in the province. No timeframe commitments were made in the announcement, which also did not provide sites in Saskatchewan where new reactors will be installed.

“The deployment of small modular reactors in Saskatchewan will require collaboration with several partners to fully encompass the benefits Saskatchewan could see in way of jobs, enhanced value chains for Saskatchewan’s uranium, and our made-in-Saskatchewan climate policy,” Environment Minister Dustin Duncan said.

All the uranium mines in Canada are in Saskatchewan, while processing, refining, conversion, fuel fabrication, research and waste management happen on a national scale with nuclear power stations located in Ontario and New Brunswick, according to Natural Resources Canada.

In December, Premier Scott Moe signed a memorandum of understanding (or MOU) on small modular reactors with the premiers of Ontario and New Brunswick to co-operate in deploying the new technology across the country.

“The advancement of small modular reactors in Canada brings economic and environmental benefits with new clean technology that is also safe, reliable and competitively priced power.”

Cameco Corp. is the leading publicly traded uranium company in the world and accounted for 18 per cent of global production in 2015. It is also an economic engine for north Saskatchewan.

Cameco is one of the largest global providers of the uranium fuel needed to supply reactors. Cameco Fuel Manufacturing is one of two suppliers serving Canada's reactor fleet and is the largest Canadian-based fabricator of in-core reactor components for CANDU reactors around the world.

The mining giant shuttered extraction at its Cigar Lake mine, the last operational uranium mine in Saskatchewan, due to COVID-19 and has yet to announce a reopening date.

The province said its new framework will keep Saskatchewan at the forefront of innovation in nuclear power as provinces and territories across Canada “explore pathways” in the federal government’s Small Modular Reactor Roadmap.

The spot price for uranium increased by more than 35 per cent after Cameco announced the first disruption at Cigar Lake mine on March 23. The company reopened its Ontario Port Hope Conversion Facility’s UF6 plant and its Blind River refinery in Ontario on May 11 following its first-quarter financial results May 1.

“We are confident that we can maintain the required roster of qualified operators to run the UF6 plant going forward, enabling us to carefully bring the plant and the UO3 refinery back into production,” Cameco president and CEO Tim Gitzel said.

Reactor components manufactured in Cobourg, Ont., and fuel bundles assembled in Port Hope, Ont., are used in most CANDU reactors in Canada and abroad.

“We will continue to provide the fuel required to power the nuclear reactors that will be part of the critical infrastructure needed to ensure hospitals, care facilities and other essential services are available during this pandemic,” Gitzel said.

Cameco is to release its second-quarter financial numbers July 29.